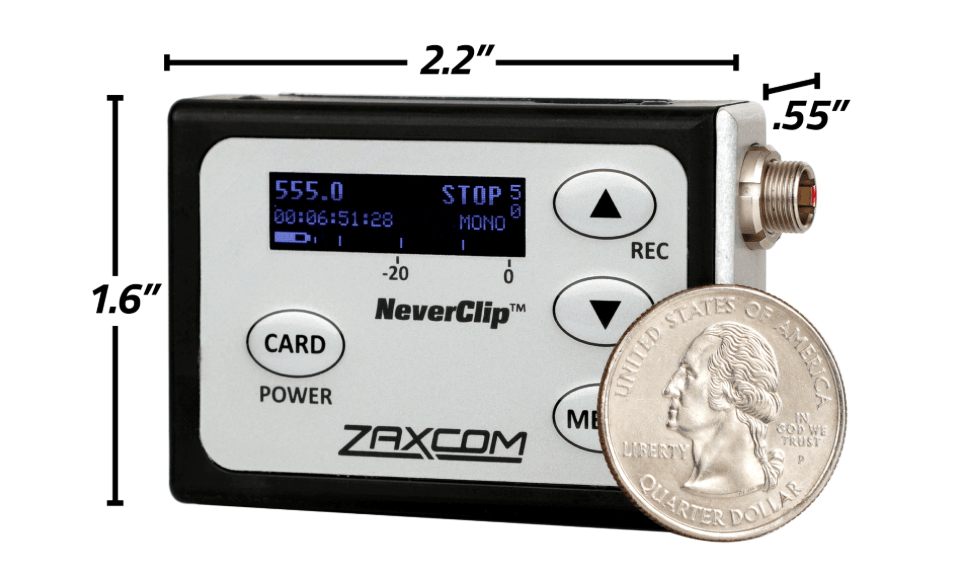 To be honest, I’d never used a Zaxcom unit until NAB 2017. In fact, while we were interviewing them for NewsShooter.com I was on a Rode Filmmaker Kit – which you should take a look at the article on how that all went here. Nevertheless, I was really amazed by the commitment the good folks at Zaxcom have to insuring not only good wireless transmission but also the integrity of the recorded performance.

Everything from having a recorder on the transmitter which has an uncorruptible data encoding (so that if power dies to the unit mid-recording you don’t get all data corrupted), to insuring that the transmission bandwidth required to have clear reception is narrow enough that one can pack 10 transmitters into a single megahert. If you don’t know what that means, it’s basically 20 times more refined than what we’re used to. Also, if you’ll take a look at the picture here, you’ll see how incredibly space efficient they are.

The good folks at NewsShooter.com have written a wonderful article on the specs and the breakdown of their new offerings including a wireless “butt plug” and high-density battery power. Here is the video we recorded of them showing their wares at NAB 2017.

Now look, Zaxcom gear is amazing. And. You. Get. What. You. Pay. For. When the price of the transmitter alone is the price of 3 Røde Filmmaker Kit Tx/Rx/Lavaliers – you start to understand what “pro audio” means. And pro it is. Are Filmmaker Kits, or Sony UWP or Sen G3s Pro? Sure. And as I’ve always said – especially with wireless: you get what you pay for. I use them all, but I also know what works best where, and if I were going to spend $3,500/channel on wireless, I’d expect it would work flawlessly everywhere.

Once we get a ZMT3 in house, we’ll write a full review of the units for you, and you’ll be able to see the CS rating for their varied and useful equipment.

Have a Zaxcom? Let us know about your experience, or Tweet about it!