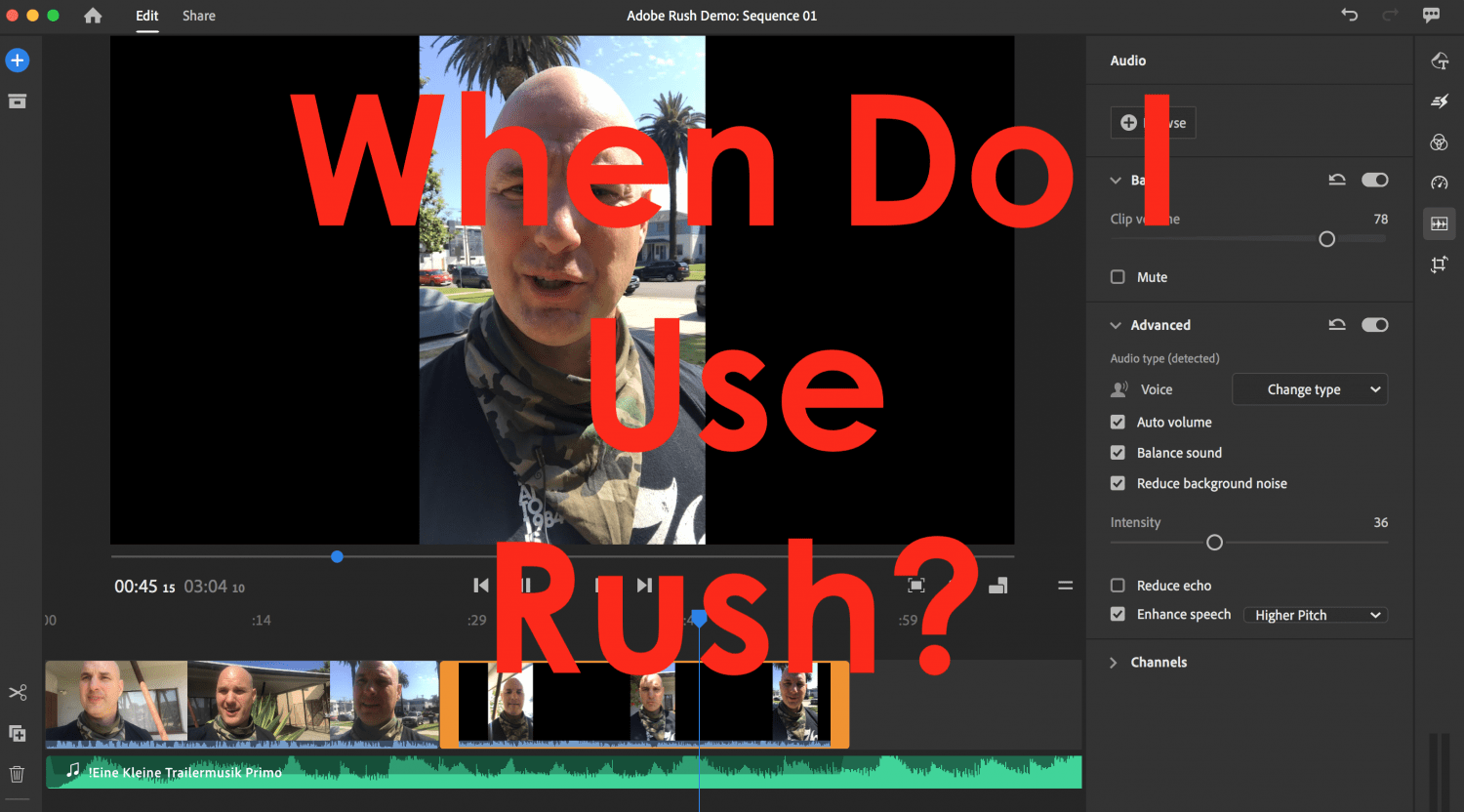 In the myriad of Adobe Audio Video apps, which one do you use to get the best editing and audio results? This article covers the Pros and Cons of using each – with an emphasis on when to use Adobe Rush.

Every project is different. Unlike most NLE/DAW offerings, Adobe has a fleet of technological warships to attack and deliver your project, with professional results and ease. But understanding which platform to spend valuable time and resources learning – especially for someone starting out – is one of the most important decisions you can make.

Of course, spending the 25 hours learning Premiere (from Adobe Learn, here at Cinema Sound or otherwise) will grant you superhuman editing abilities, in nearly all manner of media. If you’re just doing podcasts or hand-held phone videos for Youtube, Premiere may be a bit much. Although Premiere has every capability for delivering professional-grade cinematic experiences- Deadpool was cut on it after all- it’s probably “overkill” for a simple phone edit. However, if you did have an independent production that needed some custom motion graphics, audio editing, and surround output, Rush is probably going to short change your post production process.

That said, would a combined program process be possible? In any other company’s products, the answer is “no”. With Adobe products, thanks to Dynamic Linking, you can up and downscale projects to all of the Adobe AV products, getting everything you need and nothing you don’t. Read on to discover how.

Adobe developed Rush primarily for Tick-Tock users, and others who are doing simple phone videos etc. Thanks to the Rush app, you can literally shoot on your phone, and be editing in Rush immediately after stopping record. If you’re shooting on your phone, there is literally no reason not to start your editing process in Rush… even if you think you’ll be wanting the deep editing capabilities of Audition or Premiere Pro. (We’ll discuss why in a moment.) Adobe has packed Rush with a powerhouse of plugins, color grades, motion graphics, and more, but how can you know when to use Adobe Rush?

Because Rush has built in, easy-to-use motion graphics, and basic color options, you can easily scale your phone-based project to suit with these incredibly intuitive controls in Rush. Moreover, the audio editing is simple to use and equally intuitive. The audio processing power of Rush is enhanced with a hybridized version of Audition’s Essential Sound Panel. The ability to easily strip out noise, normalize volume, add simple effects- and even automatic ducking of dialog against SFX or Music- makes Rush the speediest edit platform of an app we’ve ever used.

Bottom line: if you need quick assembly of phone-based footage, Rush is your go-to.

Although Audition is audio-only, if it’s true that 80% of every multimedia production’s audience impact is sound, then it is super important we get the audio right. Premiere Pro has many of the features that Audition has, but not enough for us to consider using Premiere, as a stand-alone audio editing and finishing platform, for “prime-time” projects. If you’re doing podcasts, music, or need to take your Premiere Pro project to the next level of audio prowess, then Audition is your go-to application. Additionally, we’ve done successful multimedia mixes in Premiere Pro out to 80 tracks of audio and had great results. If you’re already familiar with Premiere Pro, then you’re probably going to be able to solve all or most of your audio needs by using Premiere. But when you find you cant, Audition is there for you. Thanks to Adobe Dynamic Linking, Audition can open Premiere Pro files, and literally import every facet of the audio work done in the NLE. Picture is also imported, but not re-rendered, which means that any edit you make to the Premiere Pro project gets automatically updated in the Audition project. Dope.

While there is no real picture editing capabilities in Audition – as there is in some other DAWs on the market – here at Cinema Sound we’ve shown again and again how powerful Adobe Audition is delivering professional-grade results. And of course, you can export both the Audition multitrack audio into nearly any 5.1 or stereo output combined with the picture into any format using Adobe Media Encoder (via Dynamic Linking). Search our archive here to find out more how to accomplish that. Rush has a highly functional but stripped down version of Audition’s Essential Sound Panel, but that in itself won’t help you know when to use Adobe Rush.

Premiere Pro is the flagship application that can do just about anything you need to get done in the multimedia-verse, but it has a strong learning curve if you’ve never driven a ship-sized NLE app. If you put in the time, however, there’s nothing you cannot do. If you’re doing independent media, remember that Premiere is used by 75% of that marketplace. 40% of professional Hollywood grade media use it. General multimedia? 60%. Premiere is no small fish in this pond. Moreover, because its functionality is similar to that found in Avid and Resolve, if you needed to learn another NLE, your prowess in Premiere would translate quickly to other apps. Notice I didn’t mention Final Cut Pro X, which has no portable value to any other NLE, save for the concepts of editing – not the practice of editing.

If you’re doing phone-to-delivery workflows, Premiere is not going to be for you. At this point, it’s a good time to use Adobe Rush. Moreover, if you start in Rush, you can always upgrade your timeline and move it seamlessly into Premiere, or Audition. It’s an amazing process which is, again, only possible through Dynamic Linking. Read on:

The Secret Reason to Use Rush:

The most incredible aspect of Rush – and all of the Adobe AV products – is that you can scale up at any point in your post production process. What does that mean? Well, you can start your shoot on a phone, complete the assembly process, fix up the general audio, do some simple motion graphics and color LUTs all in Rush. Then if you want to expand on it, you can literally IMPORT your Rush project into Premiere Pro, add After Effects projects, and send singular audio files to Adobe Audition for more audio editing. And if you really want to get powerful audio, you can then Dynamically Link the Premiere Project to Audition – or just save the Premiere Pro project, and open it directly in Audition. Remember, your After Effects, Rush, and Premiere Pro projects all show up perfectly in Audition.

And from there, you can export finals in the powerfully multi-threading-aware Media Encoder App, from either Premiere or Audition.

Hopefully you can see the power of starting something (and everything phone-based) in Rush, and upscaling as necessary. And if you are going to use Premiere Pro, especially for audio work, may I suggest you take a look at our Premiere Pro Audio Presets, and our soon to be released, On-The-Go-Audio presets which can quickly make nearly every kind of phone recording sound grand.