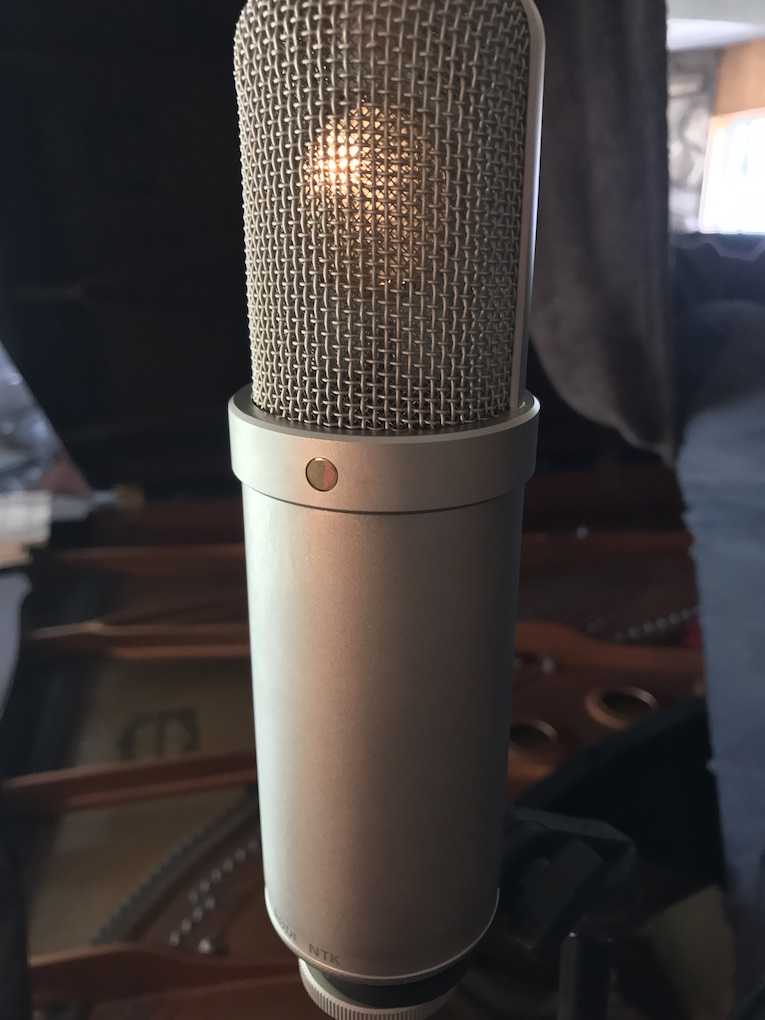 When we think of Voice Overs (VOs) we generally think of recording them with a nice cardioid condenser microphone – in mono. Why? Because generally voice overs are always a center channel affair or at best are “Phantom mono”or”Phantom Center.” In this showdown we take two of Røde Microhpones‘ venerable best condenser cardioids and see what they sound like when placed side-by-side against each other – one in stereo and one in mono. The NT4 Vs. NTK.

The NT4 is a wonderful specimen of cardioid X/Y stereo transduction. We used it on every stop on the Sound

Advice Tour where it handled road abuse very well and never failed us. As a phantom power OR battery powered microphone I can reproduce a fairly wide stereoscopic field, the NT4 really has no legitimate competitors for its price range ($530). But few people think of it as a voice over microphone, because few people think of doing voice overs in stereo. I’m here to tell you that Tweet: it’s huge oversight to believe that voice overs should be done in mono #cinemasound. As you’ll hear from the examples in the video, stereo recording of a single human voice at close range with an X/Y microphone creates some wonderful results that are impossible with a single diaphragm cardioid microphone. Moreover, even if you KNOW that you’re going to be mixing the voice over in mono, it’s never a bad idea to record it in stereo as long as you get equal Signal in both channels.

The NTK is a staple of the Røde Microphones stable. A wonderful microphone for voice overs especially in the voice of the male gender, it too has few contenders at its price range of $550. With its highly sensitive condenser diaphragm and cardioid polar pattern with extremely low noise solid-state technology mixed with tube transducers in the body of the microphone, one has to try extremely hard to make a bad recording with the NTK.

One of the main differences between these two microphones is the size of their diaphragms: the NTK with roughly a quarter dollar coin sized diaphragm and the NT4 with two dime sized coin diaphragms. Some people feel that small diaphragm microphones had difficulty being sensitive to low frequencies. I can assure you that nothing is farther from the truth. In fact in several orchestra sessions I witnessed some of the best mixers I know using small diaphragm Oktava microphones whose sound, when A/Bed with $15,000 large diaphragm microphones, could not be distinguished. In the case of these two Røde mics, I think you’ll find, as I have, that size doesn’t really matter.

The recording I’ve made of these two microphones was done in the following way:

There are three parts of the content. Sure. I could have recorded more to demonstrate the microphones’ abilities, but really, for us in production and post, microphones don’t need to do more than record VO/ADR/DX, record music when needed on the fly, ambiences and record sound effects. I’ve opted to read (myself) a letter I received from my Mazda dealer about a recall on my 2013 Mazda 3 for a mechanical issue. It has just about every form of VO issue I could concoct as written by whoever thought it best from Mazda legal: plosive, fricative, sibilance, meter and dynamic issues all rolled into one nice sequence. As for music, I opted to record my Yamaha C7 with me playing the “B” section of the Chopin Ab Polonaise (please forgive the mistakes). If a mic can reproduce a piano, it can do well at just about anything else musically (except perhaps drum set and trombones because of their incredible sound levels). As for sound effects, I chose to record the sound of my wireless drill. It’s wildly complex, high volume, and is quite dynamic. If a mic can reproduce the sound of a drill, it’s going to do well with anything else except gun fire. Lastly, ambiences were recorded with the NT4, since we’d likely not use a mono microphone to do the same. You can compare the NT4 with the other mics in the Cinema Sound Microphone Testing Playlist.

What to Listen For

Although this is coming from Sound Cloud which, like most digital distributors does it’s own compression, the fidelity of these recordings is telling. You’ll want to listen for several factors when determining whether or not to purchase a microphone, and here, we’ll apply them:

Look, I love both of these microphones. I own both of them. Which would I chose? I love the NT4 for VOs for trailers. The fact that it creates a wide stereo field when you get close creates an incredible sound for the potent VO artist. I also love that I can take it into the field and with a few batteries can have a great sounding stereo cardioid microphone handy. The NTK is my go-to recommend for anyone who needs a monophonic VO mic. It’s a great value, makes everyone sound like a god/goddess because of its giant diaphragm and with its tube innards makes everything sound smooth instead of shrill. If you had to buy one, I’d go with the NTK. If you needed a stereo mic, the NT4 is your bet. As to my take on the sound difference, I’d call the NT4 more “flat” and the NTK possessing a “radio announcer” curve. Both handle plosives about as well as a Model-A races against indie cars, so you’ll need a pop filter and ideally a shock mount, because both mics are HIGHLY sensitive.

The NTK gets a 115 CS rating while the NTK receives a 118 CS rating. The big rating difference comes from design/road worthiness and a strong difference in “flat” sound (NT4) and the “Beefed up” sound (NTK). But, if you’re looking for a VO mic which will make you sound like James Earl Jones, either of these will do you just fine.

Full disclosure: Røde is a sponsor of Cinema Sound. And I still maintain there is no better value in cinema or music microphones than a Røde mic anywhere.

Coming Into the Closet – and Recording