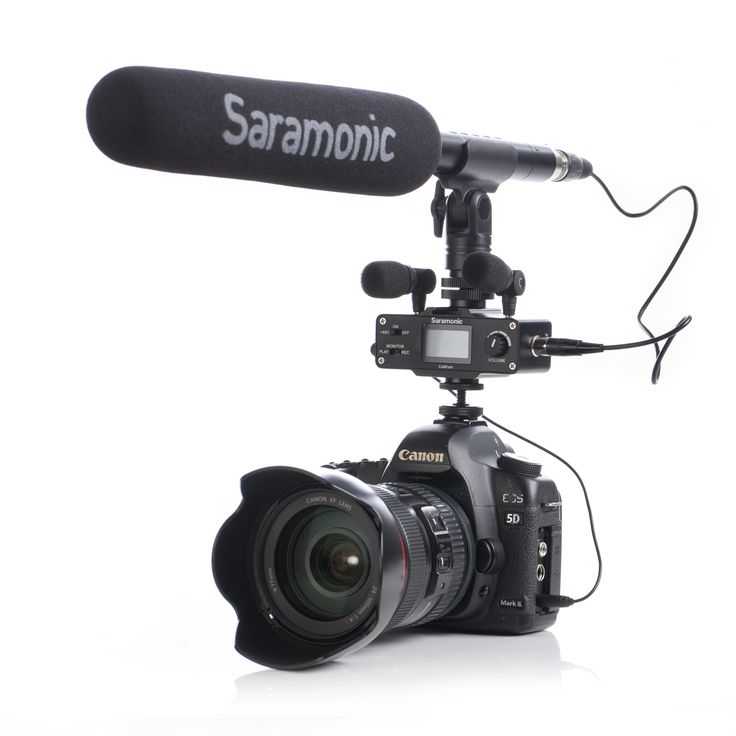 We talk about settings for recorders and mixes all the time. But one of the things we don’t really mention is camera audio settings. What is the right audio settings for camera? What should the levels be? And should we even record into camera at all? Let’s find out in this article.

What are the things we need to keep in mind when recording into a camera? Well, first, you should consider recording audio into a camera, at best, a bad idea. Yep. Camera audio, regardless of camera, is not going to bring you a professional sound. Now, for reference and sync, they’re fine. If you’re doing ENG, run-and-gun or reality, most of the time you’ve got to record into your camera, because you just don’t have the time to set up a secondary recorder and all the stuff which goes with that. I’ll talk about why you shouldn’t record into you camera below.

Other than microphone choice for your camera audio (which we talk about in multiple articles on this site), what settings should we use? What levels? What else?

Let’s talk levels first. It can be really difficult to find the level you’re recording audio at on a camera. Especially if the little screen you’re using is small. Many times professional cameras relegate audio to the smallest and most minuscule part of the camera body and screen. In fact, many prosumer cameras have audio input pots as menu items only. Boo.

As far as overall levels go, you’ll need to take into consideration your content. If you’re just recording dialog in a quiet room with a shotgun mic at 10 feet, then you’ll have audio which has a low dynamic range i.e., it won’t get really loud or really soft (unless someone whispers then screams). But if you’ve got a lav and its on a street corner, you may be in for all kinds of transients noises, and you’ll have to leave more headroom for the level to get loud. Why?

Because we must NEVER GO OVER ZERO!

If we go over zero on the audio meters, it’s the same as blowing out your exposure. And unlike in uncompressed video where you have a chance at bringing back some of the data from a frame of all 1s, in audio it doesn’t work that way.

Because onboard camera processing is also extremely low-budget and noisy, we don’t want to record the audio too low. If we do, when we turn it up to compensate in post, we’ll also turn up all the noise – and it’ll just sound like cold dung…in a snow storm.

For nominal dialog with a reasonable dynamic range, I’d start your camera recording average around -18 dB. If you notice that the level rarely goes near ZERO, then raise it. If it’s repeatedly getting dangerously close to or going over ZERO, then reduce it. The louder you can record audio without going over, the better it will be on a camera.

Also note that if you’re recording two channels, some cameras have no way to control both left and right channels. And you may have a lav on Left and a shotgun on Right. If you can’t control them independently and they have a strongly divergent level what do you do? You have to turn down the input so that the loudest mic input doesn’t go over ZERO. The other channel will just have to suffer a low level and high noise.

There are other settings to consider: Limiters, Compressors and the dreaded “AGL/ALC”: Auto Loudness/Gain Control. If you have the opportunity to turn these of, DO. The only reason you’d want these on is if you were doing reference audio and the audio environment was extremely dynamic. In such a case, having a strong limiter or compressor keeping the signal from going over ZERO is great. ALC will help signals that are too low be louder and those which are too loud be softer. However, Auto Level/Gain controls many times does not keep the sound from going over ZERO. Do not count on ALC/AGL to keep your signal from distorting. However, it will keep your level reasonably flat on average (RMS).

Why don’t we want to use these settings for final audio? Because once you’ve recorded and “burnt” in a compressor/limiter/ALC, it’s extremely difficult to return the sound to its natural state. You’ll hear all manner of “pumping” and “crushing” of the sound, and even though it might not have gone over ZERO it’ll still “feels” like it did, because of how those devices had to wrangle the audio to behave. Take look at this article from the blog to hear what limiting and compression does on a professional recorder – and multiply that effect X2 on a camera. See what I mean? Just don’t use those options.

Set good levels. Get dynamic recordings if you must, but don’t let the camera’s built in “assistants” help you with recording good audio. Since the camera manufacturer cut as many corners as they could to get you the camera at a cheap price, and since audio is at the bottom of the barrel of priority for the camera, how useful do you think any “assistance” will be from that camera in the world of audio?

Why Shouldn’t I Record Final Audio in my Camera?

As I said above, they’ve cut as many corners as they could to bring the price of the camera down in retail, and audio is at the LOWEST possible rating for camera – much like the camera part of the Zoom Q cameras is at the bottom of their audio-centric cameras. Many cameras don’t even have professional recording settings (like the C100). How do we know? Well, unlike video specs, recording in a compressed audio setting is death on a stick. We NEVER, EVER want to record in compressed audio. Although there is a significant savings of data footprint, the loss of quality to the audio is for more terrible than it is in the visual disciplines. And besides, audio data footprint is SMALL compared to video data footprints. Although you won’t be able to hear the difference from the single compressed recording process, when you bring the audio into any kind of NLE/DAW and use any kind of plugin (EQ, compression, even a fader change) and the export, anyone on the street can hear the difference (as we demonstrate in the first chapter of the Record Volume of the Cinema Sound Education).

So always use uncompressed settings. Those settings must be no less than 48kHz, 24 bit. We go into why those settings are critical in the Education, but it’ll suffice to say that this is your minimum. If you have a camera which only offers 44.1 kHz or only “compressed” settings or only 16 bit, you can use them – BUT. YOU’LL. BE. SORRY. Given the high noise floor, bad ADC/DACs and silly data processing of typical camera audio, what you’ll end up with is something which you’ll have to do a lot of processing in post to fix. And processing in post costs time and money.

Well, If You Must…

Look, the best way to do this is get yourself a Zoom F series recorder, set it up to record at 96 kHz, 24 bit, and have a great time. Syncing audio in post is a breeze on Adobe Premiere, and you’ll be a lot happier with your results. Plus, even on the F4, you’ll be able to record two lavs, and two shotguns without any further crazy setups or merging of inputs into two (as you’d have to premix those microphones in a Saramonic mixer to make work in your camera).

But IF YOU MUST, record to camera for final audio know these things:

In the end, your settings must reflect the following or better:

Recording audio on camera is always a dubious affair. But if you must, and the option of using a split system/external recorder is not possible, the settings above will save your bacon in post and give you a fighting chance of getting good and useable audio from your shoot days.