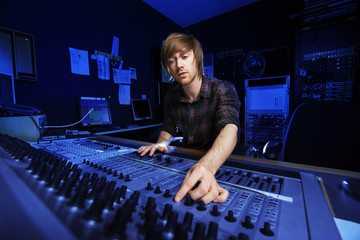 So you’ve got a film that you want to make, and you’re a little unclear on how audio works in a film?

Below are ten common mistakes that independent (and big Hollywood) filmmakers make on a regular basis. If it feels like the tone of these are a little strong, please forgive me. I have filmmakers come to my door with one or more of these issues month in and month out…sometimes as repeat customers who did not heed my advice a second time. It’s one of the reasons I created the Pro Member education here on Cinema Sound. So, please take the time to ponder carefully the warnings contained herein, and perhaps you’ll contact me for a social visit instead of an emergency post production related one.

#1: You Have No M & E Track.
You spent all this time and money making your great film. You get a distribution deal. Congratulations! You now have 30 days to deliver your deliverables and an M & E track: music and sound effects only. You figure you just need need to mute the dialogue tracks, and you submit it. Then you get a call from Quality Control saying that your M & E doesn’t cut the mustard. You have no idea why. You don’t have the $10,000+ to get one made. You lose the distribution deal. Don’t worry. It happens every day. If you had started post production in preproduction as shown in the Sound Advice Tour, you could have saved yourself this heartache. Prepare to have it built while you’re making your other post audio elements, and you’ll be WAY ahead of the game, and your distribution deal – at least from an audio perspective – will be safe.

#2: You Put Music YOU Like in Your Film.
First, do you know the demographic of the people going to watch your film? If you don’t your film is doomed, because you have no idea the “listening” of the people who are going to spend money on it. Second of all, if you don’t know what kind of music those folks resonate with, you’ll never be able to lead them emotionally to the place you want them to go. Just because you like the music your putting in your film doesn’t mean it’s good music to put in there. 9 times out of 10, the music you like ISN’T the music which should be leading these people emotionally. Do your research. Know how to use music as it should be used. Command the focus of your audience, and leave your favorite music in your playlist, not in your movie.

Each of the three main audio elements of a film have their own powerful affect on an audience. Sound Effects, especially ambiences, foley, and all the elements which are “subtle” have a very specific and wildly important role in multi-media. Most independent filmmakers have no idea that well done SFX are the powerful basis for manipulating and maneuvering audiences to like their products, characters, stories and suspend disbelief. Without this knowledge and the simple steps to mastering it, everyone will consistently enjoy other people’s films better than yours.

In the next two parts we’ll discover the other things which will drop you into a vat of hot audio water.

Let us know your thoughts, or Tweet about it!

Does YOUR Audio Interface Double As a Recorder with Timecode? MOTU 1248 Can