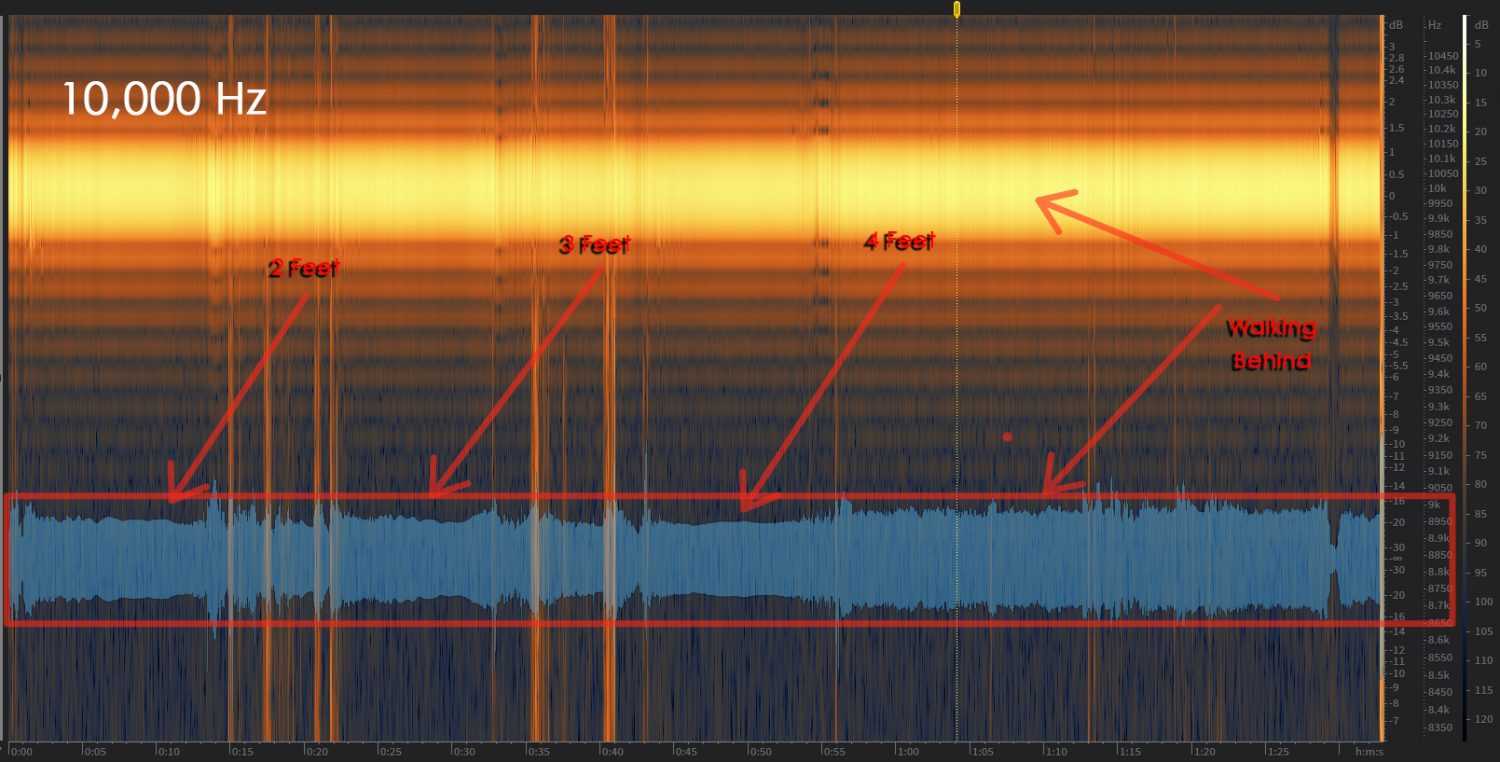 It wasn’t too many years ago that the 1,000 Hz tone was the de facto standard in testing equipment. And while that equipment was primarily analog, we’d happily run various tones through speakers and use a decibel meter to test whether or not speakers were balanced. What follows is why you must never, ever, EVER do this and what you must do instead of speaker testing with tones!

What is a tone? Well, in this case it’s a sine wave signal of a particular frequency (in Hz) at a static volume or voltage which when referenced allows any other party working with or using a recording, studio or file to have their gear reflect the levels of the original studio. For example: if you place a 1k Hz tone at -12 dB on all your channels for 10 seconds before the start of picture (and you tell me this), then I can calibrate my equipment to have that tone be the same if there’s a discrepancy. Voila! Your mix sounds like it did in your studio in mine.

Back in the old days (like the 90s and earlier), we had to use several tones, because the analog gear we were using actually had different volumes for different frequencies. The gear wasn’t very uniform. We’d typically use 100 Hz, 1kHz, and 10kHz. We figured it was enough to give a general feel of calibration across the frequency spectrum. In hindsight we were nuts.

One of the reasons we use a sine wave is, because the waveform is a pure tone; no overtones to skew the voltage. Also, it’s readily apparent to anyone on the street when a sine wave is being distorted in any way, so it gave an added level of security that the 28 patch cords you were using in your circa 1972 board to get your recording to your reel-to-reel master were all good…if the signal could at all get above its own noise floor. This was generally fine for dealing with levels on tape or even digital files. But when it came to testing speakers, it was the stupidest thing to do.

When we tune the speakers of a room for equal volume, we use a microphone and a weighted measurement system. This system skews its input from the microphone to adhere to certain listening standards and volume rules. That means that what it’s telling you about all frequencies isn’t equal. Even with a “C Weighted” setting, some frequencies are not as equal as others. So if we use a 1kHz sine wave to calibrate our speakers, we may not get anywhere near the same reading as the 100Hz or 10kHz tone – even if everything else were equal – which it isn’t. Using three tones is nowhere near enough data to gather a sufficient understanding of your speaker’s levels. To say nothing of the addition of standing waves or reflections in the room which may boost or cut that particular frequency and further skew your results.

Sine Your Life Away

By far, the biggest reason for never using a sine wave (or any single wave) to test the volume of your speakers is the nature of the wave in physics itself. If you look at a cutaway view of a sine wave you’ll notice that there are peaks and valleys to the wave. And although there’s not such thing going on in the air, that image does accurately describe how high and low pressure zones work in air. The higher the frequency, the smaller the distance it takes for an entire oscillation of the peak-to-trough-to-peak cycle takes. For example: 100 Hz takes 3.4 meters to make a full oscillation, 1,000 Hz takes .34 meters and 10,000 Hz takes 3.4 centimeters. It’s a nice linear curve. It doesn’t matter if the waveform is a sine, square, triangle, sawtooth or whatever wave, the length it takes to make a full oscillation is determined in physics.

What this means is that the pressure of the wave is never constant along its oscillating path. It’s always going from high pressure to low pressure and back. There’s never a “flat” or “static” point. And while the nature of a square wave is to be in static positions, even the best speakers in the world cannot reproduce a pure square wave 100% – again, due to physics.

What this means is that if you’re sending a 100 Hz tone through your speakers and you’re at the “peak” of the wave at, say, .85 meters (1/4 way into the wave) you’ll be experiencing the full volume of the waveform. Let’s say it’s 80 dBSPL (full pressure). Then if you move back 1.7 meters (3/4 way into the wave) you’ll be at the full trough/valley of the wave which would be a negative value of the wave at 80 dBSPL (least pressure). Lastly, if you stepped toward the speaker in the other direction .85 meters you’d be half way into the wave. And as you can see, half way into the wave means you have zero pressure either way. It would mean you’d have absolutely no sound from the speaker. I can prove this to you, because if you play a 1kHz sine wave from your computer speaker, plug one ear, and move your head around. You’ll find there are several places you can position yourself where the tone nearly completely vanishes. It won’t completely vanish because of the reflections in the room.

You can already see what I’m going to say next, right?

That would mean that as you walked from position to position you’d get a radically different volume. Everything from 80 dBSPL to 0 dBSPL. Worse, this would happen more and more the higher the frequency! You cannot get an accurate reading of a speaker from using a single sine wave. It. Is. Impossible.

We did a little test where we took a JBL Series 7 708P in our studio and ran various sine waves through it into an Audix TM1 Plus reference microphone. We moved the microphone from 24, 36 and 48 inch distances. We also walked around behind the microphone while recording to see how much reflection interacted with the pure sine wave. Understand that this was from behind a microphone with a polar pattern that is primarily forward. Thus, any indication of a change would be significant. We recorded the sound on a Zoom F8 at 192kHz/24 bit and processed everything in iZotope RX. Here are the results.

If you’re not familiar with the RX Spectrogram, the blue is straight waveforms, and the orange/yellow is loudness from low frequencies (bottom) to high frequencies (top). Here you can see the bright 100 Hz bar across the bottom of the image.

Notice that, in general, at 100 Hz, 2, 3 and 4 feet reflect somewhat what we’d expect to see: a rising of volume as the microphone came closer to the speaker. However, do notice that the levels do not reflect exactly what we’d expect: the inverse square law. In fact, the 3 foot position is quite a bit softer than it should be. And since the wavelength of the 100 Hz tone is greater than the space tested here, we would have expected to see even more wonky results. Notice the later 2 foot distance which shows Mark moving around behind the microphone. It strongly affected the wave and 100 Hz was reflected and diffused off his body.

At 10k, it’s all over. Nearly no volume change between any of the distances, and very strong striations and waveform phasing from walking behind. Also notice the variation in level even in a still room. This is due to the reflection of the 10,000 Hz around the sound treated room causing aperiodic reverberation which kept the microphone level from being constant.

As you can see, tones aren’t going to get you anywhere near accurate readings from your speakers. The solution would be to have an oscillator which would output all frequencies at once in a fashion which would allow you to plot the range of a speaker. And while you’d still have room reflections and the stringent requirement for stillness during testing, you’d at least remove the issue of distance wavelength issues. Of course, you’d still have boosting and cutting of all frequencies based on their wavelengths, but because there’s 20,000 frequencies going at the same time you’d have plenty of trails to create a mean.

This solution already exists in the form of “Pink Noise.” There’s several kinds of noise which we generate. Only two are really required for audio/video: White and Pink. White noise is the generation of sound from all frequencies in the hearing spectrum at the same level. Because of the nature of physics, this sounds like “hiss” and is very high frequency dominant. The reason being, simply stated, the highest octave of the hearing spectrum has 10,000 Hz in it, and the lowest has 20. So you’re going to hear 9,980 times more volume from those high frequencies, and thus it sounds like high frequency “hiss.”

Pink noise, in contrast, has those same frequencies reduced in volume 3 dB/octave. This allows a more reasonable and “flat” reflection of the hearing spectrum. It is with this generator that we test speakers. The downfall being that the overall volume is not constant, but the horrors of wavelength issues are removed. And while it’s not very nice to listen to, it is the superior way to test the volume of speakers. We generally don’t use this as reference tones, because of the ever-changing nature of the volume. There, a simple 1kHz reference tone will work in this digital age. But only there.

Never, ever, EVER use a tone to test a speaker. Always use pink noise. Any questions?

Explaining Word Clock and Why YOU Must Have It!