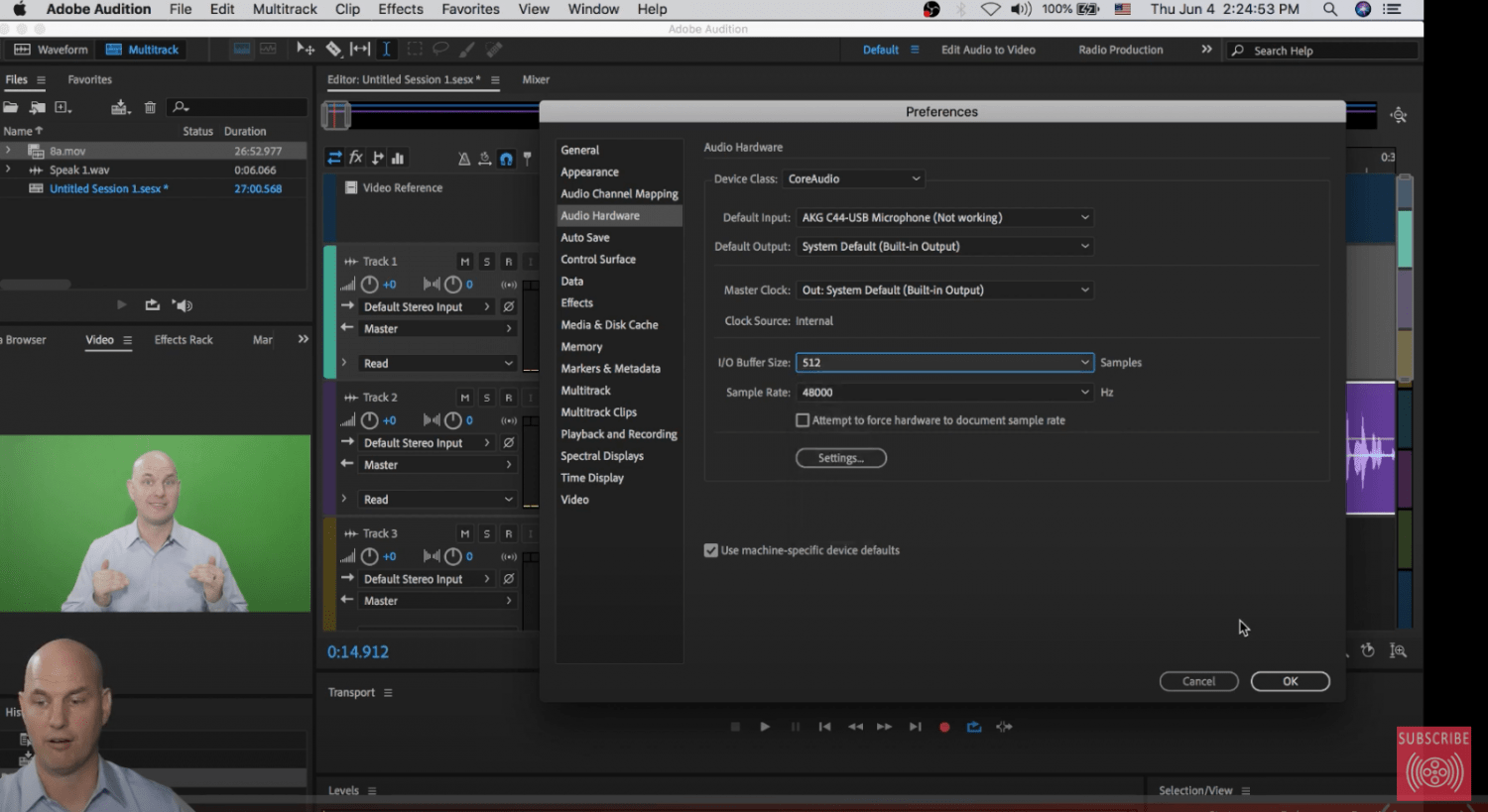 Speeding up your DAW is always a good idea even if you aren’t using a plethora of tracks. Add a bunch of plugins and busses, and even the most simple of track counts can bog down fast CPUs. Add to this, video, hundreds of tracks, complex bussing and surround outputs, and a CPU really has to chunk the data fast. We want to be able to have our DAW be able to efficiently access all the horsepower of our computer so that we can focus on mixing and processing quality audio – instead of dealing with computer issues. In this article, we’ll show you how to speed up Adobe Audition with these tips which come straight from the mouths of the Audition development team! Speed Up Audition now!

2. Go to Preferences/Memory and insure that you have the maximum amount of memory possible allocated to Adobe products – especially Audition. If you’re running Premiere at the same time you’ll want to make sure you have plenty of RAM available for all. We don’t want your CPU having to use your SSD or (perish the thought) your spinning hard drive to have to store memory. RAM is hundreds – if not thousands – of times faster than even an SSD. And the quickest way to lug down Audition (or any program) is to force it to read from a drive.

3. Kill your RAID. Audio files are usually lots of little audio files – especially if there’s been a lot of editing to the files in the timeline. Although RAIDs are generally faster than a single spinning drive, when it comes to thousands of audio files needing to be accessed in a 128+ track environment, the CPU generally has to sit there and wait for 128+ pieces of data to spin around far enough again to get the next piece. Even with modern caching, no drive cache is optimized for this kind of brutality. Don’t use a RAID for audio. A single SSD is more than enough to give the kind of speed of even a 6 drive RAID 0 (and is probably cheaper / TB). Use RAIDs for video. Not for audio. A dual RAID 0 might not be bad, but an SSD will always be best. For just about everything anyway. I use a 3 drive RAID 0 filled with SSDs. it does the trick.

4. NEVER, EVER, use network drives. If a RAID isn’t fast enough for little files, a network drive REALLY isn’t. All drives need to have direct access to the CPU.

5. Euthanize your old drives. If you’re running anything older than 5 years of age, put it out of its misery – or use it for backup. Any drive we need to use should be able to do 200 Mb/s or better.

6. Big effects are probably the leading issue of issues with Audition. If you’re running 16 reverbs in 5.1, it’s extremely likely that you’re not getting solid playback – on any computer. Audition has yet to truly take advantage of multithreading CPUs to their maximum, and we have to be judicious about how and where we use big CPU intensive effects – reverb being a major culprit. Denoise, Dereverb are also massive CPU hogs.
We want to be using busses to help organize and get maximum value out of any reverb plugin we’re using. Do a search of this blog for many articles on how to do this, or just dig in to the Mix Chapters of the Cinema Sound education.
Also, any plugin that is “in red” with a red background is NOT DESIGNED TO BE USED IN REAL TIME!. It’ll sound amazing, but you’ll want to PRERENDER that plugin/track. One instance of “full reverb” will wipe out a big 2.96 Ghz 12 core easily.

7. Video is the second most prevalent offender in the struggle for clean audio playback. As always, the less compressed a video is, the EASIER it is on the CPU. Again, this isn’t intuitive. The MORE compressed a video is, the HARDER it is on the CPU. So we want to use big file size, low compression files like Pro Res HQ – NOT H.264. The less the compression, the less CPU computations.

8. Finally, you can make your video play back at a fraction of its resolution. This powerfully relieves the CPU of having to play accurate and perfect video and get back to the task of playing all those plugins and audio tracks. Just right-click on the video window and select Resolution. Then use one of the fraction settings to appropriately degrate the visuals of your picture. A warning: a 1/8 setting is excellent for your CPU but nearly unwatchable. If you need to use such a setting, be sure “Full Resolution on Stop” is selected so that at least you get a nice picture when playback ends.

If you use these 8 methods when running high track count, high plugin count sessions in Adobe Audition, you’ll navigate around the usual issues which cause playback hiccups. And most of these tips work in just about EVERY DAW and NLE.

If you haven’t visited our Youtube page, we have a video which talks about this directly here: