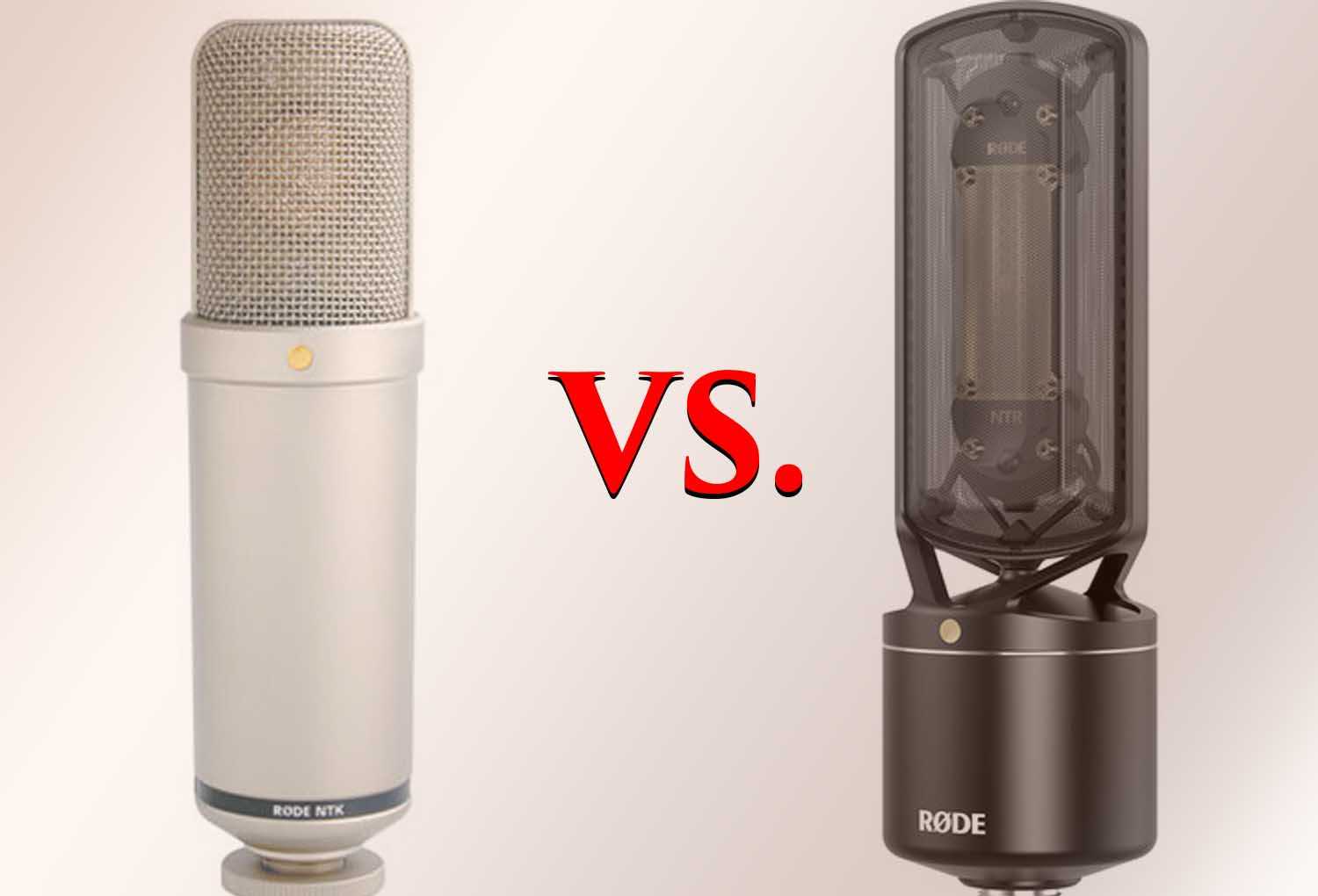 I’ve gone on record touting the virtues of Røde microphones and their incredible value. In this article, we’re gonna have a SHOWDOWN between two of their top ADR/VO/Music recording microphones: The NTR  vs. NTK.

This showdown is a bit of apples and oranges, since these two microphones come from opposite sides of the tracks electronically.

The NTR is a ribbon mic which heralds from the oldest tradition of audio transduction. The idea being that sound can

be captured easily with a suspended metallic ribbon which, having much less surface area than a round diaphragm, would be more sensitive to sound pressure levels. And on the whole, it’s true. The problem with ribbon mics for the last 70 years is that while a ribbon can be extremely sensitive, they have a terribly low and noisy voltage output. In fact, ribbons are dynamic microphones and require no power to operate. Add to this their extreme sensitivity to trauma where even the slightest bump might rupture the ribbon itself, and you have few folks using them. Until now.

Thanks to both Røde and Royer Labs (I’m partial to Dave Royer, because he lived down the street from me and I still use his early solid state mics), immense advances in solid state technology allowed for a combination of condenser phantom power voltage boosting, mechanical shock absorbancy for protection of the ribbon, and improved alloy ribbon compounds which make new ribbon microphones far more viable a choice than traditional dynamic microphones in the studio. Realize that if you sent phantom power to 20th Century ribbons it would burn up the ribbon. The NTR reflects the ultimate advantages in this new hybridization and is a beautiful sounding microphone that rivals most high-dollar condensers.

solid-state IC tech. The trouble with straight condensers is that they can get “edgy” or “harsh” when combined with digital recording at 48kHz. Back in the days of spooling 2″ tape (who remembers that?!) condensers helped cut through the analog “mush” and noise. But combined with the enharmonic distortion that low sample-rate digital recording provides, sometimes things go bad in the warm-sound department. What many manufacturers have done is create an “old-meets-new” hybrid which includes the good-old-days tube technology – which always added a beautiful warmness – to the sturdy and clean solid state sound to render a wonderful balanced output, high in gain and low in noise. The NTK is just this kind of hybrid.

Although these two mics are from different classes entirely, they’re the same in that they’re both ingenious hybrids which take what’s best from multiple disciplines and make something which outclasses the “pure” versions of their compatriots.

We used the NTK on the road of the Sound Advice tour for 33 cities and never had a break down. The NTR, although reasonably roadworthy with its enhanced ribbon suspension system, has been in our studio the entire time. But they both appear/are road worthy.

As to overall sound quality, both microphones show up as you would expect them to as if they were far higher dollar versions of themselves: the NTR showing up like a $2,500 ribbon, and the NTK showing up like a $2,000 condenser. As always, the Røde brand lives up to its Cinema Sound reputation as being the best value around.

Both mics have strong voltage output, and are horrible at handling plosives and require a pop filter for close-mic VO.

From here the differences become polar. As with all ribbon mics, the NTR is fixed figure-8 polar pattern.

Although the front and back are similar in sound, they are by no means the same – which I always find as an advantage in a mic with a similar pattern: it’s like getting two mics for one. The rear side is a bit “thicker” than the front. I’ve experienced this on two different NTRs.

The NTK is a fixed cardioid polar pattern, which is a little disappointing, but given the extremely low price-point, they had to cut costs somewhere. It has a beautiful EQ curve which makes just about everyone sound like James Earl Jones at his most articulate. But if you’re looking for a flat transduction, you’re not going to find it there.

We find that the NTR has a louder noise floor than the NTK, although for a ribbon it’s insanely quiet…but if it

were a condenser, it’d be considered a bit too loud for comfort.

The NTK requires several minutes to warm up – Røde recommends up to 9 minutes – because of the tube built into its body. Although you’ll get audio out of the ballast, don’t expect it to be of the high quality you

purchased the NTK for. Our experience is that it sounds fine after about 4 minutes. The NTR of course, only requires phantom power and is up an ready in seconds.

The NTR weighs about 75 lbs…or it feels like it does because of its powerful protective/high voltage magnet, and you’ll want to have a robust microphone stand to hold it.

Now to the good stuff. What does the NTR sound like? If you’re familiar with the beautiful rich and warm sound of a ribbon mic, then I’ll describe it as the perfect version of that sound. Even, without any noticeable bumps or accentuations which makes recording instruments or sound effects wonderful. Because it’s figure-8, it does a great job of recording the sound of the room for louder sounds. You’ll want to be in a good sounding room, however. Because of the polar pattern, it does a poor job or rejecting anything but sounds from 75-105º (the sides) which it does as if someone had hit the mute button on said sounds. Some might suggest that the highs are a bit missing, but I’d call it the definition of ribbon mic beauty.

What does the NTK sound like? As mentioned, it’s the perfect VO mic: crisp highs, deep accentuated lows and smooth mids. A very low noise floor and strong output has it be what I would consider should be a basic staple microphone for every media creative. Its cardioid pattern has it do very well at rejecting just about everything around it except for what’s close and directly in front of it. This makes it the perfect mic for folks in a not-so-quiet recording environment. The issue would be sibilance. The NTK makes nuclear fire out of anyone with emphasized high frequencies in their speech. And although the strong influence of the tube technology abates that a bit (and makes for beautiful mids/upper mids), it’s not enough to force us to use de-esser on most female VOs when we use this mic.

Look, you’re not going to go wrong with either of these microphones. At $550, the NTK is much more affordable, but for an all-around-great microphone the NTR at $799 may afford you a wider use for only a $250 bit more.

You can always audition the sound of the NTK and NTR in the Cinema Sound Microphone Archive.

Full disclosure, Røde is a sponsor of Cinema Sound, but understand that we’ll never push a product on you which is bad just because a sponsor promotes it. Everything on Cinema Sound which we give good reviews of is genuine, and we’ll defend it.

SHOWDOWN: Best AA Battery – the Results Will Shock You!