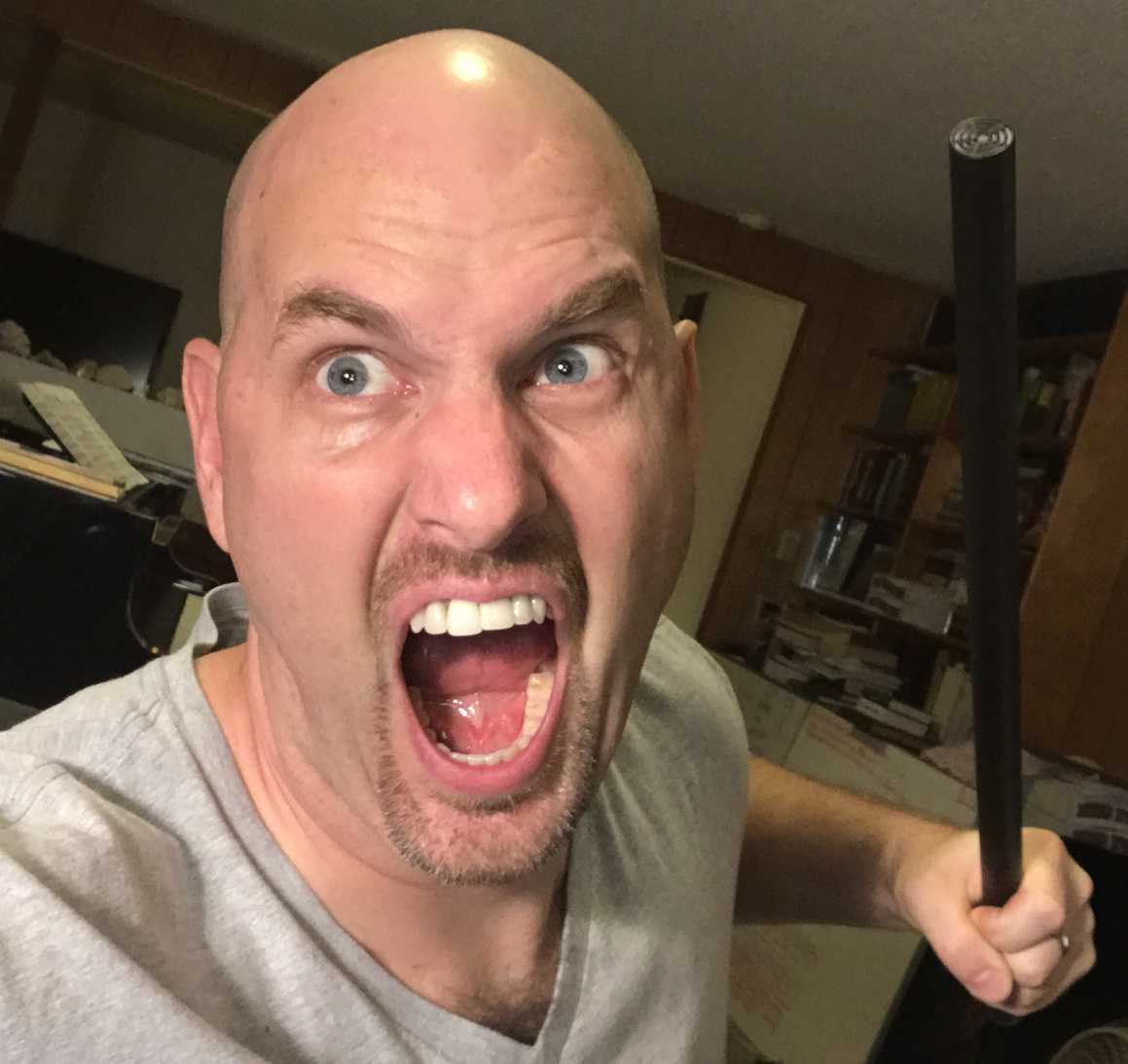 Best to Burglarize Another Home. Mark Has His NTG 8 Handy and he's found another Pro Tools Evangelist.

Shotgun mics or “hyper/super/ultra cardioids” really reveal the nature of “you get what you pay for.” In every other kind of microphone, technology and manufacturing has gotten so good, that you can get a wonderful sounding mic for a few hundred dollars. But dollar-for-dollar, shotgun mics, because of the nature of how they must work, tend to reveal the issues that lower budget manufacturing exacerbates. In the case of the NTG8 and the NTG3, you’ve got Røde’s high-value/affordable mission statement in its ultimate expression. It’s fight-night: NTG8 Versus NTG3, and you’ve got a ringside seat with popcorn. Ding-ding.

First of all, if you don’t know what a “shotgun mic” is, it isn’t something to do with firearms, although the States of New York and California will

probably outlaw them soon, because they kill people. The terms “shotgun,” “boom,” and “hyper, super, ultra” –  cardioid describe a microphone so ingeniously designed that it can take in sounds which are “off axis” – or not where the microphone is pointed – and reject them using phase cancellation and other cool bits, while maximizing the range at which the microphone can successfully be sensitive to sound on axis. A normal cardioid has very little range and a wide polar pattern, but a supercardioid has an extremely narrow polar pattern and a giant range. This is what a shotgun’s characteristics are. Generally, we rate shotgun mics by how narrow their polar patterns are:

There’s also parabolic microphones, but those have more to do with the reflector which goes with the mic than it does the actual mic (which many times can be omni).

These shotgun mics are very happy to be on the end of a boom pole and pointed at actors’ mouths, because they have the benefit of not needing to be close while rejecting everything which isn’t in front of them. Great for on set.

Second, these mics aren’t cheap. A Sennheiser 416 is deep into 4-figures. And soon, we’ll throw up a 416 against an NTG-8, but as always, Røde counters all expensive alternatives with high-value, great sounding kit. Some corners are cut, to be sure, but in my experience, in terms of value, Røde delivers more than anyone else. It’s why for now, I’m showdowning the NTGs. I could certainly showdown the NTG-4 and 2, but they’re in completely different classes being that they aren’t true condenser microphones (electrets), and they don’t measure up in the same ways. Do I own any? You better believe it. I tell everyone in the MZed Pro Member Education to go out and buy and NTG-4(+) for Foley alone. But here we are with the 3 & 8. Let’s go.

The NTG 3 is one of those microphones that’s just a workhorse. It’s super clean, not flat in frequency response by any means, but is designed to get a great sounding vocal.

The NTG 3 is sort of the bastard stepchild in the family of shotguns because of what the good folks at Røde did to it in order to solve the biggest issues supercardioids have: a rear pickup in the polar pattern and a front polar pattern so narrow that it’s sometimes difficult to keep moving actors on axis. The NTG 3 has a wider polar pattern in front than nearly any “shotgun” mic I know of. While this might seem a bummer when the idea is to reject sounds which aren’t on axis, most of the time between the boom op moving and the actor counter moving, a shotgun mic isn’t truly on axis anyway. And with a strict super/hyper/ultracardioid, that’s far more of a bummer. So the NTG 3 is surely a wide supercardioid. They’ve also killed of the annoying habit of shotgun mics picking up the sound of the boom operator by eliminating the back pickup in the usual polar pattern. I have no idea how. It’s a miracle. But it’s vanished. The NTG 3 is one of the only shotguns that rejects directly behind. Dope.

Naturally, the NTG 3 needs phantom power and tends to fit most mountings – but not all. It’s a strangely wide microphone that stretches the tensions of many a normal mic clip and won’t fit into others outright.

The NTG 3 is a true condenser which means it’s nearly impervious to moisture in the air or dampness or rapid change in temperature. This is critically important when shooting outside where night time or early morning dew can easily kill off lesser microphones.

After it’s all said and done, and the bells and whistles have been swooned about, I love the sound of this microphone when applied to vocals. Not too keen on on it for music, sound effects or ambiences, but for dialog, its EQ matrix is such that you can put anybody on this thing and get a great sound.

Beyond the fact that taking the NTG 8 out of its protective case is like igniting a lightsabre (which we did in sound effects on the Sound Advice Tour every time we took it out), this Ultracardioid is my favorite microphone of its kind anywhere. That’s right. You heard me. Anywhere, any price.

“Mark, you’re crazy! What about Schoepps or Sennheiser or anyone else? Røde!?”

Yes. Note that I said “of its kind.” What kind is it? The best way, without a parabolic reflector, to pick off a sound at range while rejecting a maximum amount of sound off axis. And I mean, this thing is like two styrofoam cups and cable between you and your sound source – except it sounds a heck of a lot better. I call it an “Ultra” cardioid because its polar pattern is so narrow. Again, the folks at Røde made a Frankenstein by reducing the rear sensitivity of it, which makes it uber useful in the field when recording sound effects whereas the operator is behind the mic sighting it in.

The NTG 8, like the 3, is a true condenser which requires phantom power. However, because of its gigantic size (why, thank you!), it requires special rubber mounts (supplied) in order to mount it onto anything. Once there, however, you’ve got a wonderfully sweet sounding microphone with a needle-like polar pattern at your disposal.

Why is it so long? The longer the shotgun type microphone, the more lower frequencies it can reject. Because of the nature of “shotgun rejection” the length of the wave rejected directly corresponds to the body length and “slats” along the mic, and the lower a frequency, the bigger the wave. Naturally, short shotguns (shortguns) do a terrible job of rejecting any frequencies in the mid range or lows. Do keep this in mind when you think about getting a good deal on a shortgun mic, but you need to record in a room full of men or murmuring. Good luck.

What I love about the NTG 8 is that given a close range, it’s also a wonderful all around mic. I’ve used it on musical instruments, vocals, sound effects and even VOs. It has a much warmer frequency response than most microphones with narrow polar patterns, and I really appreciate that Røde chose to keep the microphone’s service emphasis wide.

To compare the NTG 3 and NTG 8 is a little bit of apples-and-oranges, but not so much. Since they’re only $200 in price difference, the same manufacturer and supposed to do the same job, I think they’re wonderfully suited for comparison.

Best Mic To Use For Your Boom Pole: NTG 3

The NTG 3 wins this, because it has a wider polar pattern which will decrease the chance of off axis drop outs. It also has a wonderful boost in the high frequencies to further enhance the chances of getting the dialog recorded well. The NTG 8 is only good for boom pole use if the actor is static – like in an interview. There, perhaps the 8 is a better situation, but you don’t really need it that amount of off axis rejection, because theoretically you’re in a controlled environment anyway.

Best Mic To Use For Noisy Environments: NTG 8

Nothing beats the NTG 8’s rejection of wide bandwidth sound. I mean, we shot on the beach of Sydney, Australia and had major rejection of strong surf thanks to the low frequency rejection of the longer body. And coupled with it’s ultra-narrow polar pattern, in semi-fixed actor use, it’s wonderful. The 3, even though it has excellent rejection, doesn’t have anywhere near the bass rejection of the 8, and its wider polar pattern allows other noise to be heard.

Best Mic For All Around Use on Set: NTG 8

With the NTG 8’s flatter and warmer sound, I favor it to the brighter NTG 3. I like to think of the NTG 3 as an NTK without the giant bottom, and the NTG 8 as an NT-R with a high boost. If I had to use a shotgun mic where I needed to record with a wide array sources, the NTG-8 would do well in all cases as long as it could be kept on axis to the subject.

Best Mic To Buy If You Could Only Buy One: NTG 3

Other than the fact that it’s $200 cheaper, you’re always going to need a mic that records dialog well. It’s the primary reason you purchase a super/hyper/ultra cardioid: to put on a boom pole and record an actor. The NTG 3 does this much better in every way (except perhaps warmness of tone) than the NTG 8. Add to this the difficulty in keeping the 8 on axis with moving targets and the answer is clearly the 3.

If you’re going to buy a shotgun for home defense, most people think the best thing to do is buy one with a shorter barrel for a wider spread, but in this case I assure you that wrapping an NTG 8 around an intruder’s skull or impaling his eye socket with an 18″ NTG 8 is much more useful and effective than an NTG 3.

We give the NTG 3 a 120 CS Rating, because they’ve really solved the bulk of the issues that boom operators have with booming dialog with this microphone. It suffers in general fidelity, but when the main purpose of it is dialog, I think it was a smart choice. What it lacks in integrity of transduction it more than makes up for in value.

We give the NTG 8 a 104 CS Rating because it’s wonderful sound, incredible niche uses for field recording and general use capabilities. As an all-purpose mic (whatever that is) however, it’s a little pricey. That said, the current one we have has been rock solid. Don’t get us wrong, we love the NTG 8, but it’s esoteric niche nature, and hardware issues we’ve experienced has us have to give it a lower rating.

Don’t forget that you can listen to these two microphones and the rest of the microphones in the CSMA here.

Have your own thoughts on the NTG Series of Mics? Let us know about them, or Tweet about it!