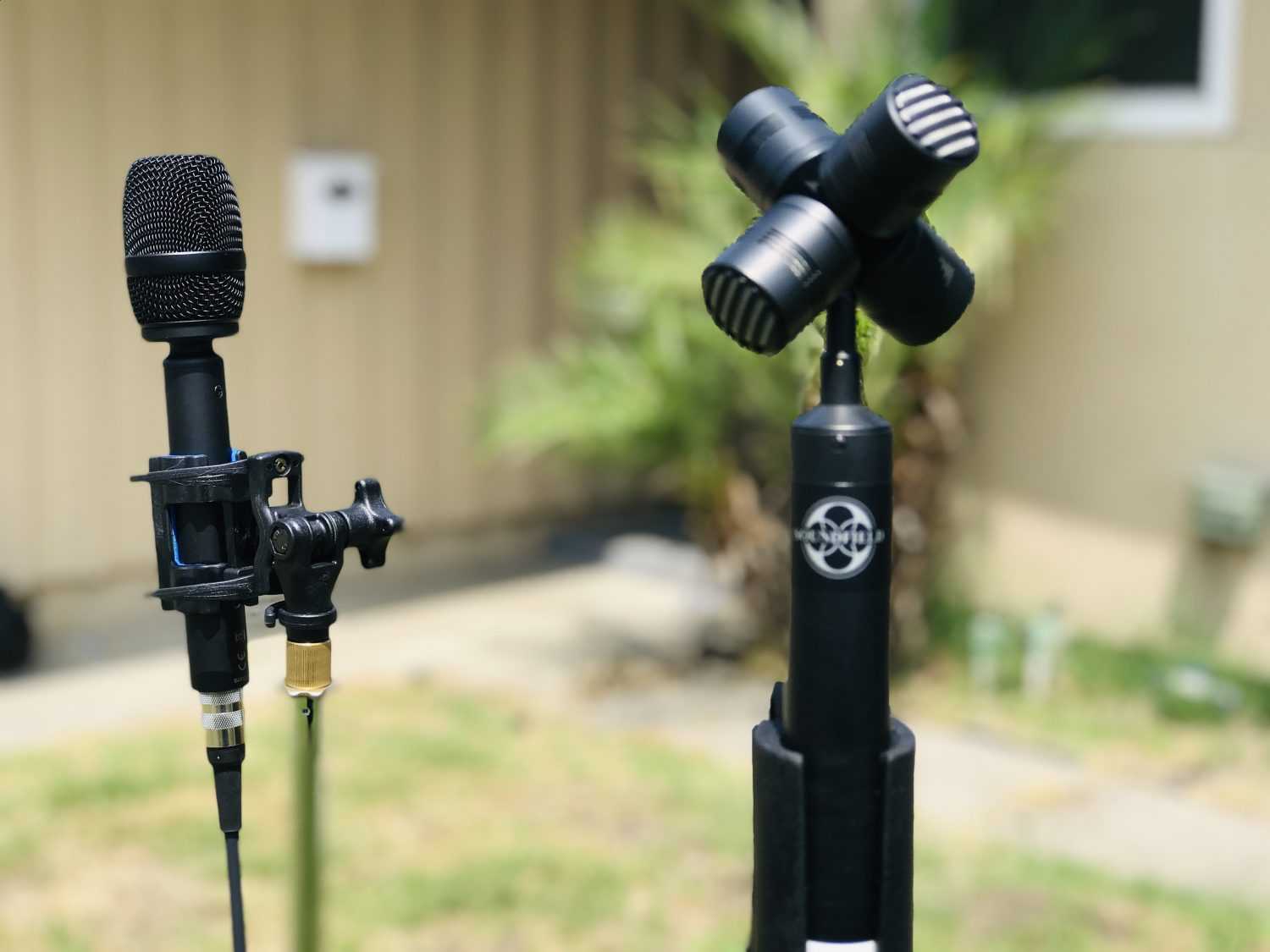 Amidst our work on the Cinema Sound ambience library, we thought it would be helpful to take a look at comparing the Soundfield SPS 200 VR mic we’ve been using with the popular Sennheiser Ambeo VR mic. Read on to see how they fared against each other in this SPS200 vs. Ambeo VR Shootout!

The new holy grail of sound recording and processing is Virtual Reality (VR). Whether it’s using faux post processes in binaural headphone delivery or in full-blown Atmos or 11.1+ systems, the new immersive nirvana is finding a way to record and process 3D audio in VR environments.

Processing surround sound in post has been around for some time. As we talk about extensively in the Cinema Sound education, taking stereo and even mono audio recordings and implementing them in 5.1+ surround is not only commonplace but pretty easy to do these days. But recording in 3D audio formats has always been difficult.

It used to be we’d record with holophonic microphones that are embedded in a human head-mannequin enclosure which had 8 wires sticking out of it. The resulting sound was okay as long as the head was shaped generally enough to emulate the heads of the rest of humanity – which of course is impossible. But this format was completely inadequate for processing real-time interaction with the sound sources – the likes of which are now commonplace in immersive game experiences. Add to this the growing interest in 3D cameras and the facility with which users can drop fully 3D visual and audio information into social media – and we’ve got a definitive need for an easy and professional-grade system to record 3D audio.

There’s a long and colorful story around the discovery of the 4-head, 4-capsule diaphragm which we now see dominate this 3D microphone landscape, but it’ll suffice to say that these psuedo-alien microphone heads work really well in reproducing 3D spatial audio information. Each of the 4 diaphragms are independently recorded and 4 separate tracks on any professional recorder. They are then processed in dedicated decoder plugins or software which have a host of parameters to create 5.1+ (2D), Atmos or fully 3D audio outputs in various channel formats.

Processing these channels is now supposed to be super easy to do and with a flip of a button in the right plugin software, you can be uploading your recording directly to Facebook with full 3D 2nd order Ambisonic immersion. We’ll see.

But processing aside, you can’t change the nature of how the audio is recorded once it’s transduced into bits. So it behooves us to have the best microphones recording our audio. And while there are all kinds of options out there for this kind of thing – many of which are barely worth being a paper weight, we’ve been using the Soundfield SPS200 – which is the big brother of the Røde NT-SF1 for months. Røde took the technology found in the SPS200 and applied to the far more affordable NT-SF1. And although Røde wouldn’t give us an SF1 to work with directly, we’d consider the SPS200 to be 10% better in terms of noise floor and 25% better in terms of spatial separation based on our cursory use of one a friend of ours owns. We’ve been using the SPS200 to create our ambience library with good results.

Enter the Sennheiser Ambeo VR microphone which we saw prototypes of nearly 18 months ago. We’ve been itching to compare these two for months, and our friends at Sennheiser were kind enough to furnish us with a VR mic.

Because there are 8 million ways to use an ambisonic microphone, we whittled down the test to three simple projects: recording low volume exterior ambience along with grass footstep foley, low volume interior ambience, and 80 dB dialog from all positions. These three tests will reveal the dynamic range and output of the mics as well as how invasive the noise floor is for low-volume sources. It also demonstrates the overall “spaciousness” of the microphones’ VR experience and how separated the sources are as the sound source moves around the 360º spatial sphere.

We recorded both microphones at the same time at the same height (about 66″ off the ground) in both exterior and interior environments. We recorded the exterior in front of my house which has a semi-busy suburban street and the odd pedestrian traffic including plane traffic. We recorded walking on the grass around the microphones, dialog from all angles and clothing. We recorded the interior in my living room which is dead quiet except for a refrigerator 10 feet away from the microphone position. All microphones were recorded simultaneously on a Zoom F8 at 192 kHz/24 bit, and processed in ProTools Ultimate on the plugins listed below.

The process of processing the output of these mics is no small task. It took me several hours to figure out how to do it – as there aren’t really any manuals…and even I had to search the internet to figure out how to get these files to be heard. But figure it out I did in several ways and I chose the following: Since many of us are uploading these files (or will be) to social media – including Youtube and Facebook, I decided to use the FB Encoder as the binaural headphone output plugin for auditioning the sound of the microphones. I used it on the outputs of both microphones equally. Here’s what I’ve concluded:

The output of the Ambeo VR is about 4.5 dB louder without any sense of additional noise. This means that it is a quieter microphone by more than double. Even in the quietest parts of my home – where the only thing really happening is the birds (outside) and the refrigerator, neither microphone indicated any perceivable noise. This makes both microphones incredibly clean in what otherwise could be an golden opportunity for noisy output given four capsules at-a-time. Still, with the increased output and no additional noise, the Ambeo VR is the better choice where signal-to-noise is concerned.

As to frequency response, in general, they both fare well with strong contrast to each other. The Soundfield has a robust and flat-feeling response. It feels much more like a “this is what it really sounds like” sound. Nothing is particularly strong. Highs and lows are represented equally, while mids around 800-1.5K appear to have a bit of an emphasis. This is a good frequency response if you’re looking to get an even recording, sonically. The Ambeo, in contrast, has a clear loudness contour where mids are lowered, and high frequencies from perhaps 6k and up are enhanced. Low frequencies do not appear to receive the same amplification. So this “loudness contour” is really a mid-range dip and a high frequency shelf boost. That said, it is a lot nicer to listen to. And given the lack of noise, it’s probably the winner in the overall frequency spectrum sound. At least as far as this writer is concerned.

As to other issues like build, the Soundfield wins handily with more robust and far more lengthy and useful cabling. Also the Sennheiser “windscreen” is the standard, sub-standard windscreen which only manages to attenuate the most subtle of wind noise. However, the Sennheiser does have a screw-on windscreen which is far superior to the no-wind-screen-at-all provided with the Soundfield. That said, placed under dead cats, the Soundfield, even without a built in windscreen, appears to handle wind better. This, with it’s better cabling, has it handily win the contest of build.

As to the “included” software, the Ambeo and Soundfield mics have their own proprietary software offered for free. The Ambeo software, in the end, we couldn’t figure out how to use in any fashion other than in conjunction with other software. The Soundfield software appears to be superior with the ability to create ambisonic, surround and other outputs with ease. I read that the Ambeo plugin does this as well, but without any kind of manual available, at least in Logic Pro and Pro Tools, I was unable to do anything other than take the 4-channel output in A-format, and translate it into the common B-format for processing in the Facebook Encoder.

Testing the software itself to insure the best and most accurate results, I tried both plugins in both “normal” and Ambi-X formats as well as trying both plugins on their competition. As it turned out, each mic sounded best in its own format with its own plugin – the Ambeo mic going to Facebook in Ambi-X and the Soundfield going in as normal B-format.

After compensating for the lower output of the Soundfield mic, it was a bit difficult to distinguish where the spatial clarity of each mic differed from the other. They both did well in creating a wide field of ambisonic/binaural space in our EX-29 headphones. But a few things became clear after much auditioning.

This has the Ambeo mic win at what the real purpose of a VR mic would be: spatial distinction and sonic width. Although the Soundfield is superior for rear clarity, the overall feel, and width of the Ambeo is superior. Listen to the audio files above and see for yourself.

Given the “cleaner” and more contoured and pleasant sound of the Ambeo and its overall spatial superiority, we’d give the high-noon shootout win to Sennheiser. However, the processing of that audio is more problematic, but once a template/setup is created you can use it again and again without hassle.

We’re looking forward to continuing our ambience library with the Ambeo VR as our go-to mic and see if ongoing testing in low-volume environments returns any further results. We’ll let you know if so.

5 Things You Must Do When Shooting Interviews (or Auditions)