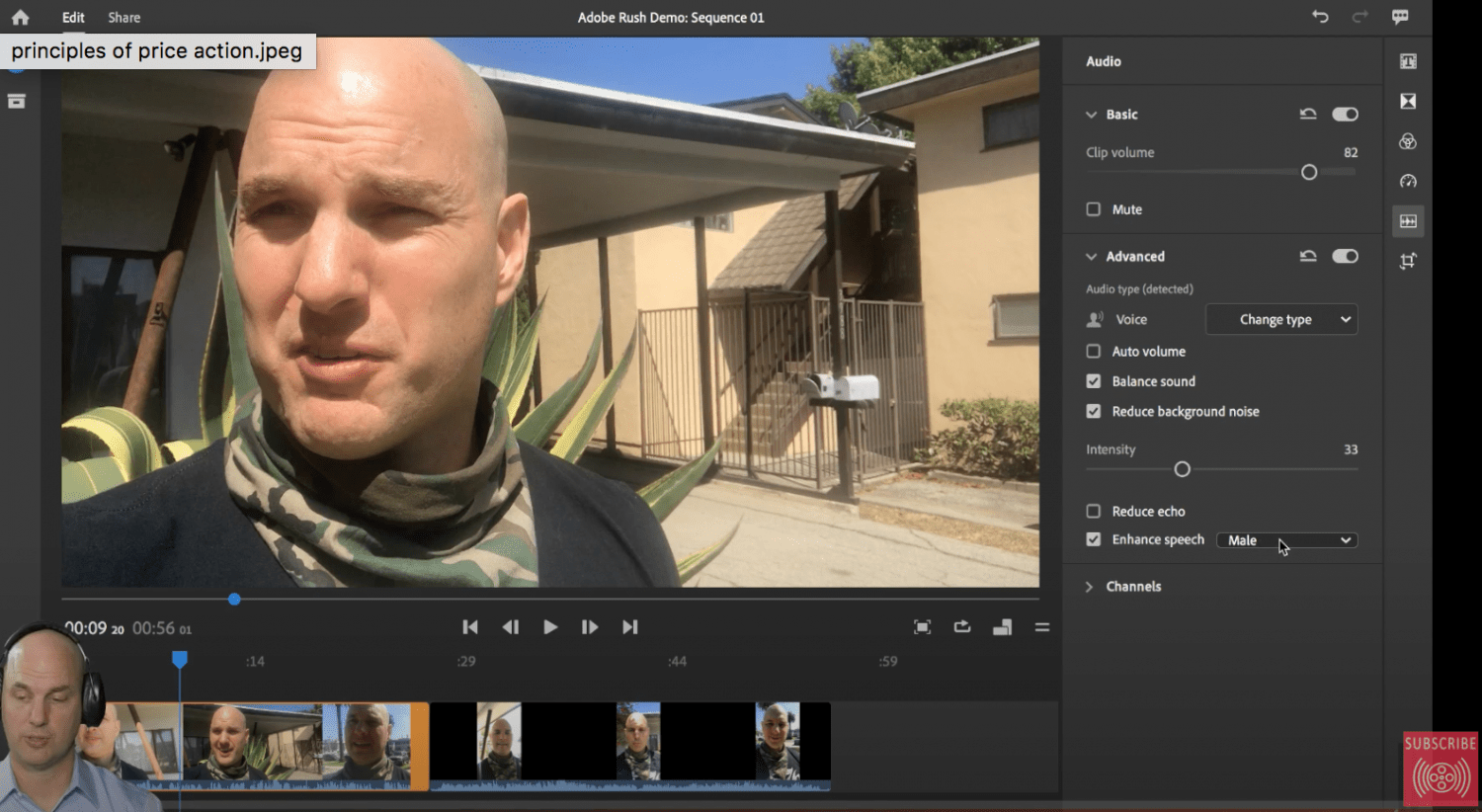 For years we’ve been talking about all the Adobe AV products: Premiere Pro, Audition, After Effects, Media Encoder. We’ve recently started exploring Adobe Rush and we’re really surprised at what we’ve found. Read on to learn about the secrets of Adobe Rush

Any time someone tells me that they’re cutting video or audio in a “non professional” or prosumer NLE/DAW I roll my eyes. I think, “how can anyone get a professional result from something like that?” Just the lack of audio implementation alone should be enough to have people realize that they shouldn’t be cutting on something like iMovie et al. If you want to compete in the AV marketplace, you have to have an EDGE – a competitive advantage. Audio is where we find that secret advantage as we speak about in the mix section of the Cinema Sound education extensively.

But Adobe is never sitting on the laurels of the past. And with the introduction of Rush, we – and all Youtubers and Instagrammers alike – have a powerful new tool to get videos done fast, fully integrated with their smart devices, and have the ability to create that powerful professional result. Here’s what I mean:

When you crack open Premiere or Audition, you’ll instantly be met with a good deal of opportunities for professional useages and processes which most people don’t need to make a simple video. All anyone really needs is the ability to cut picture, colorize picture and deal with simple audio editing, and make an appropriate and functional export. While PP and AA have this ability, it takes a few steps of professional care and expertise to export such a deliverable.

Rush gets rid of the frills and brings the thrills. The ability to get a great sounding and looking export from phone shot footage is a breeze with Rush.

Now, let’s be clear, Rush is no Premiere Pro. In fact, if you’re looking to do anything from a narrative standpoint, although Rush can do the basics, you REALLY want to be in a “real” NLE like PP. But, if you’re doing fast phone-based video, and need to have fast turn arounds, then Rush is the thing. Here’s why:

First of all, you’ve got the lion’s share of features from AA and PP’s Essential Sound Panel. Auto Volume, Volume Leveler (renamed as Balance Sound), denoise (renamed as Reduce Background Noise), Reduce Echo, and the ever hilariously named Speech enhancement – especially the “Male Enhancement.” In the same way as we would do in AA or PP, Rush intelligently determines which kind of audio you’re placing in the timeline: Dialog (renamed Voice), music or effects. Then it allows the appropriate parameters for the discipline of audio you’ve chosen. Double Nice.

As for picture, we have the normal editing and cross fade capabilities with a myriad of color LUTs/corrections/creative filters which can easily add the basics of what’s needed for good looking footage from badly shoot originals (usually the case on phone footage). It’s actually a lot of fun working in Rush not only because of the interface (which is clean), but also the speed at which things can get cut.

Lastly, along with the ESP concepts from PP and AA, Rush has the ever-loved “auto ducking” feature when music is inserted. With nearly all the capability that the feature has in Rush’s bigger brethren, this allows maximum speed for mixing and outputting multimedia which has music that needs to be “auto mixed” with dialog in a hurry.

Once you have your timeline ready to export, it will send directly to all the major social media platforms as well as master files to your CPU. But the BEST part about Rush, is that Premiere Pro will happily import any Rush file by going to “Open Rush Project” from the Premiere Open pull down menu. It’s amazing. All the effects, edits and ducking (and all audio parameters) show up as though you’d authored it in PP. Of course, from there you can easily export the project to Audition for further audio work.

Rush is really a great new addition to the Adobe AV family especially if you’re doing ongoing content shooting with smaller video devices (like your phone). Because you can import files directly into the phone/pad version of Rush and finish on a desktop (and even in PP), it makes Rush a must-use product for the Youtuber.

You can watch a video demo of Rush on the Cinema Sound Youtube Channel here:

Dialog Mixing How To: Music to Dialog with Side-Chain Dynamics Processing