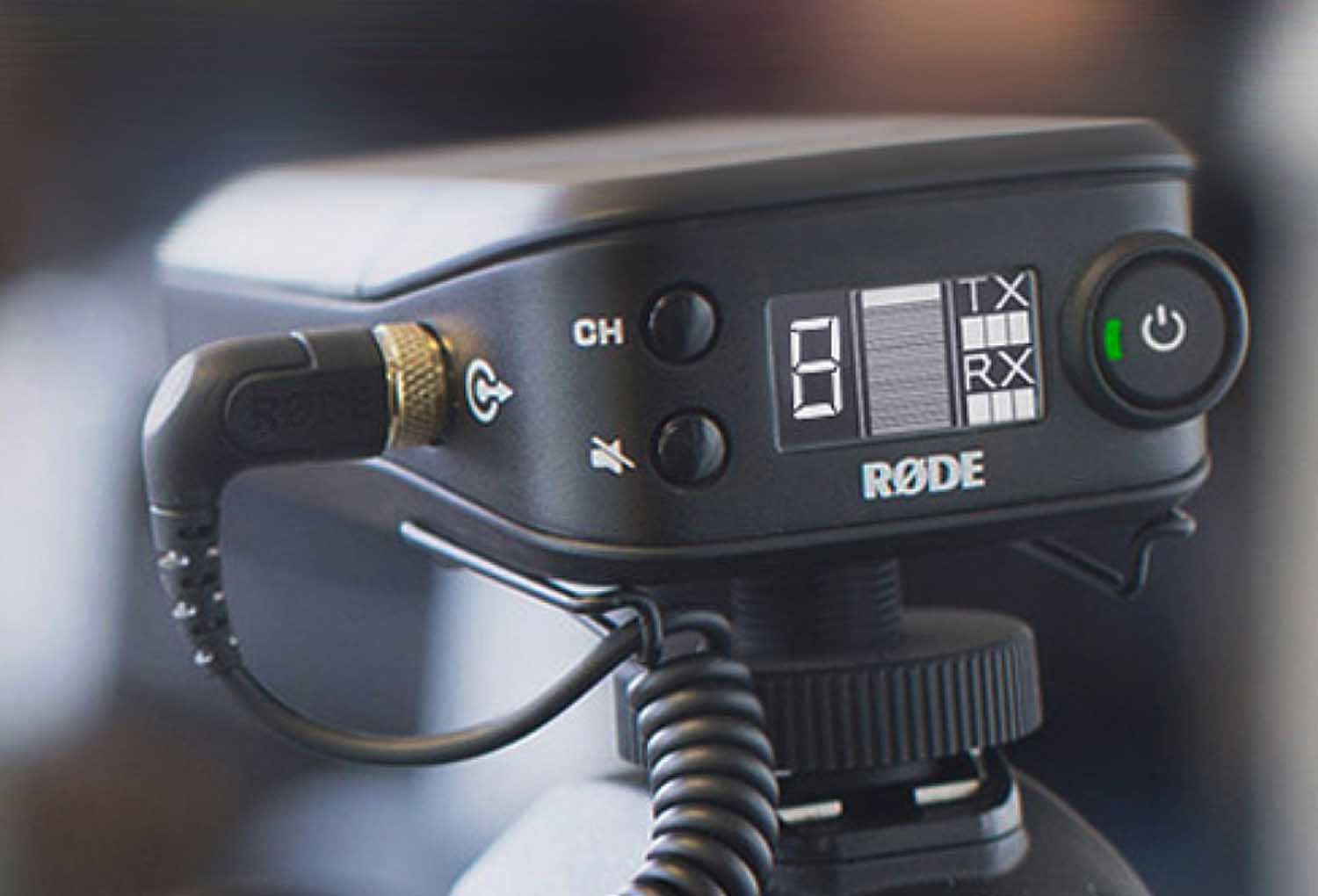 There have been 8-million reviews of the Røde Filmmaker Kit and its Transmitter (TX), Receiver (RX) and lavalier mic. One great review is from Matthew Allard at Newsshooter.com and if you’re interested in purchasing an FMK, I strongly recommend you read it. This article is geared toward our experience using the FMK system at NAB 2017 at the Las Vegas convention center while we shot interviews on the various floors for newsshooter.com.

First, let’s briefly go over what makes the FMK far more than the sum of it’s incredibly low price ($399) and a few things to consider:

I’ve had several filmmakers ask me,

“Hey Mark, you’re a proponent of Filmmaker Kits, but you’re always telling everyone to record and mix at 48kHz! Why the heck are you using a Tx/Rx wireless system which is at 44.1!?”

I know. It’s confusing. If wireless systems actually sampled and compressed audio like a DAW, having a transcode in the middle of the TX/RX process would be a total drag. Completely unnecessary. Damaging to the audio, in fact. But, Tweet: wireless transmission is NOT AT ALL like what goes on in your DAW. There’s what’s called data packet sending and receiving not to mention a good deal of what’s called “Companding” – sort of the equivalent of shooting in Log and then adding a LUT later. The audio that the transmitter is sending has very little to do with the voltage that comes from the microphone. Moreover, as we’ll see later in this article, FMKs transmit on a frequency that is odd for audio use. Trust me, the math for getting good audio out of the receiver is in the good hands of Røde – and they say that 44.1kHz is a grand way to do things. Based on what I hear coming out of the FMK, I agree.

If you think that you’re going to go to Radio Shack and supplement the provided cables with your own 3.5mm-

to-XLR male connectors, think again. Tweet: In my experience, the ONLY cables which function with FMKs are Røde PROPRIETARY CABLES. If you attempt to use ANY OTHER manufacturer of cables, you’ll get horrible results. I have no idea why this is. But trust me, it is. You’re going to have to purchase Røde brand cables (which are reasonable) and adapters in order to get them to work. Accept nothing less, and don’t let anyone borrow those adapters for something else.

Unlike what we’re used to in either analog or digital wireless, FMKs only have 8 channels you can select for transmission. My understanding is that within each channel there are several sub-channels which the FMKs create diversity around, but with only 8 channels, your ability to dodge loud transmitters near you are going to be diminished. In fact, we were at the MOVI booth where they were telling us all about their cool new auto-focus-puller-thingy (I’m an audio guy) which transmits…you guessed it…at the same transmission frequency as the FMK but a MUCH broader band – and I’m going to guess that your wireless solution for running audio to camera in that case will not be with an FMK.

One of the things that I find a little “chincy” about the FMK is the nature of the springs in the battery compartment of both the TX and RX units. If you pull the batteries out, sometimes those springs will bend or break. Now, Røde warns you about this in the form of a slip of paper and some instructions in the box, but out in the field when you have to move quickly, gently dealing with batteries is a bit of a drag.

Matthew dealt with this powerfully in his article listed above. The TX and RX are big. Like, real big. When we did

the example video in the Pro Member Education for “Macbeth” we had a significant issue trying to strap the TX to Rivkah’s leg with ace bandages to hide it on her slinky dress wardrobe. With a Sony UWP or Zaxcom unit it would have been super easy. But the FMK TX unit was a bear. In fact, it’s so large that many times when the transmitter is attached to an actor’s belt, upon sitting the microphone connector smashes inward which causes shorts in the cable. There’s certainly no issue with an RX unit being large, but a large TX unit – especially when you have to hide it (always) – makes things very difficult.

I’ve got three sets of FMKs. I also have the wireless boompole transmitter found in the NewsShooter Kit. But on my older .v1 FMK TX, the microphone terminates with Røde’s proprietary “MiCon” connector. It’s a super-small threaded head where, ideally, you can connect any kind of Røde adapter without actually adding “normal” adapters. It’s a wonderful idea, but because of the nature of the “screw-on” 3.5mm jack MiCon which comes with the FMKs, many times the microphone cable is pinched during use, and shorts in the cable render the microphone useless. Fortunately, new versions of the included lavalier mic solve this by forcing it to terminate into a 3.5mm trs jack without choice.

So Easy To Use

I’ve worked with a lot of Tx/Rx systems, but none are easier to use than the FMK. I mean, you turn on the RX, then turn on the TX, push the red button on both for them to pair, and you’re in business. The battery level is shown on the receiver as well as audio input level, mute etc. Super dope.

One of the amazing things about the FMK is it’s wildly efficient use of battery life. Without question, a single set of batteries will last an entire day of shooting – likely two. Compare that with the battery life of only a few hours with Sony or other products.

Now, looking at these bits straight on, it might look like FMKs are a bad purchase. But the next section – and the entire section on wireless transmission in the Pro Member’s Education – will show you why not only do you get far more than what you pay for with FMKs, but sometimes the best option is the cheaper option.

When I was training filmmakers across North America on the Sound Advice Tour, the Federal Communications Commission in the USA was fixing to sell off $42 Billion worth of wireless transmission bandwidth to cell phone companies. This particular frequency outlay covers the bulk of all consumer and pro audio wireless transmission – including the over 1,500 channels of wireless transmitted every night on Broadway, NYC. I’ve heard all kinds of brave plans on how to work this out, but none of them are any more or less than rendering every piece of wireless transmission gear you have illegal to use.

And while some manufacturers are offering “alterations” to those users who have purchased their higher end models (as in over $1,300/channel), the rest who are using Sony UWP, Sennheiser systems or anything in the hundred-odd-megahert band will go to jail – JAIL – if they are caught using them and they have no recourse with their manufacturer’s service department. They’re just out thousands of dollars.

WORSE, the FCC is using, I’m told, Google cars – you know, those cars that map the roads – with radio receivers that note where illegal transmissions are being made…which trigger the men-in-black to arrive and take offenders away. I’ve not confirmed this report, but it’s scary to think could happen this way!

So, when people ask me what wireless system they should buy, there’s only one answer: systems which are currently – and seemingly for the near future – out of the FCC sell-off: the 2.4 gHz zone. And the only manufacturer I know (and trust) who makes a system like this is Røde.

I spent a day with the good folks at NewsShooter.com (the Wednesday of NAB) running around the show

interviewing vendors who have cool new audio kit to reveal. I was told by my camera man, Chuck Fadely there had been issues with the FMK he had been using in prior days. Apparently the sound was cutting in and out, and he attributed it to too much transmission going on across the show. I mean, yeah, let’s face it, NAB!? Probably 2,000 channels of all frequencies amuck. I’d heard from other audio recordists that the reception of the FMK isn’t up to the par of its more expensive competition, but I’d never had trouble using it myself.

One of the issues with transmitting on 2.4 gHz is that although it avoids FCC troubles, it jumps right into the suss-pool of all consumer electronics devices – not to mention every data router.

I arrived with my own .v1 FMK complete with Mi-Con connected mic. I attached it to myself so that I didn’t have to worry about missing what my interviewees might say whipping the stick mic back and forth between us. The Stick mic was a Røde M3 on a NewsShooter transmitter “butt-plug.”

For the first couple of hours, we had RF hit-less experience. Great sound, wonderful response. But as we interviewed the good folks at Zaxcom – where they were broadcasting, perhaps, 100 different channels at their booth alone, we ran into problems. We also ran into issues when we interview the folks at Rycote an hour later, but I discovered that the MiCon connector had come loose. Tightening it solved the issue. However, we never had any issue with the butt-plug transmitter.

At Waves we had a strong RF interference issue with my transmitter. I’d been running my Tx/RX on channel 8, but when we switched it to channel 4, it solved everything, and we were able to do the interview. Troubles again plagued us at iZotope, and we had to abandon my lav altogether. However, I was no longer line-of-site to the RX because I was behind the iZotope desk filled with equipment and computers. The butt-plug performed flawlessly, but it was line-of-site.

All-in-all, the performance of the FMK in perhaps the most horrific environment for wireless possible was passable.

Not great. The sound was fantastic, but the RF interference issues deserve a look at. For myself, I’ve never had an issue with an FMK on any set from a solely transmission issue. I’ve certainly had cable/adapter issues with the microphones due to the MiCon connectors.

But if you’re going to compare the FMK to a Sony UWP or better, it’s important to note that from a cost analysis, the FMK is in another league: the affordable league. Especially when you can purchase two channels (with mics) of FMK for the price of one UWP.

For me, I’m a believer in the FMK and it’s cousin the NewsShooter transmitter. Are there things I wish Røde would fix on them? Oh yeah. But for the money, the value is amazing – as shown on the CS rating graphic where the FMK receives a 115.

Had different stories about using an FMK? Let us know or Tweet about it!