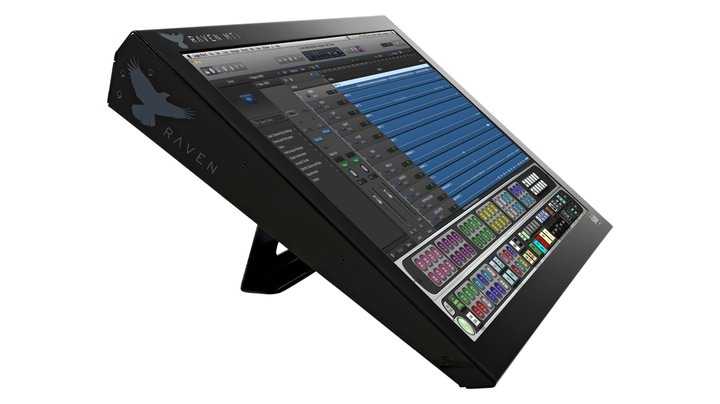 Control surfaces are difficult to choose. Either they’re super useful but wildly expensive, or super affordable but not difficult to use. PC folks have had touch screen capabilities for their DAWs for years, while the good folks at Apple have chosen to disallow such functionality. Our friends at Slate Digital have devised an ingenious solution for both PC and Mac folks in the form of its Raven products. In this article we’ll take a look at how their MTi2 has been working for us in Cinema Sound Studio B and if it’s right for you.

Although most of the work that goes into a mix takes place via moving key frames, once the bulk of the gross mixing is done,

it’s finessing busses and groups that is required – and that requires faders. Using a mouse to grab a fader is a total drag. It’s useless in the situation where you need to grab more than one fader at a time, and a mouse-fader combo requires you to spend more time going back and redoing work than a control surface with multiple faders does. We’ve experimented with several control surfaces including the Mackie Control surfaces, Avid C24 consoles, Avid Artist Mix varieties and others. The general rule is what I mentioned above: you can get awesome functionality for a lot of money or spend a little money and get frustrated.

Having physical faders is wonderful, but they come at a cost, and many times those faders are connected to an interface system which has only 128 increments top to bottom. This may sound like a lot, but when the human brain can hear the difference of a 1/5th of a decibel, and there are more than 144 decibels from the bottom of a fader to the top at 24 bit – well, you get the idea. 128 sucks.

What would be great is to have a system that doesn’t take any more desk space, looks cool, is highly functional, and can do multiple fader manipulation simultaneously. Now of course, Avid has several of these kinds of systems, but you’re into them for low-to-mid 5-figures. AND you must use Pro Tools. See this article to find out how much it is to get into that system.

Enter the Raven from the good folk at Slate Digital. Slate hit the market hard with its first iteration of the Raven – a giant $10,000 touch screen which wowed audiences at every trade show they showed it: the “MTX.” Any studio that had it drew crowds. Multi-touch capability for Macintosh and PC users, plugin integration, and full mixing functionality of several DAWs. For Mac people, the idea that it could also be used in single-touch mode for every day work had everyone gobsmacked. But, the barrier to entry was the 5- figure price. Ouch. Since then, Slate has revolutionized the audio industry with microphone/plugin packages which allow engineers to accurately simulate all of the great microphones with a single proprietary mic. They’ve also developed powerful plugin technology and done an excellent job of modelling the great analog processors.

Enter their next iteration of Raven: the MTi2. 27″ 1920X1080 resolution with even better multi-touch capabilities, macros, and

better functionality for $999. At this point, I got interested, and we had one in Texas when we shot the 85+ hour Cinema Sound education – and happily demonstrated it there. Since then, we’ve installed one here at Cinema Sound Studio B, and have used it on two mixes. Here’s our findings.

The MTi2 is a modern miracle for Mac users and a cool controller for PC users. The ability to grab up to 10 faders at once is the biggest reason we love it. Because it’s a screen as well, it takes up zero desk space and adds a clear 27″ amount of screen real estate to the studio. Next to our 27″ apple display and courtesy screen up high, it makes for a sharp-looking studio. The touch sensitivity of the faders is good, and finite detailed movements are facile. For programs like Logic Pro X and Pro Tools, the ability to work with sends, plugins and the basic transport commands is great, but the real power shows up in the ability of the Raven to do batch commands – a series of commands/key strokes/clicks in one tap of a finger. For things like window sets, and complicated work, it saves time with every use.

It connects easily via USB 2.0 and HDMI for video.

To be clear, the Raven doesn’t work directly with the DAW. The Raven software, combined with a regiment of under-the-hood

applications creates a visual “overlay” which creates the multi-touch capabilities of the DAW you’re working in. Without this overlay, you’re only able to use single touch, although the macros and batch commands still work well. When you purchase your Raven MTi2, you must choose which DAW you’ll be using. You’ll then receive a license to use the Raven software for that DAW only. That license will install on an iLok. Of course, you can still use it in single touch mode in any DAW, but you don’t get the batch commands, multi-touch or interface. Additional DAW licenses require additional funds.

To be fair, it should be noted that both times I’ve tried to install one of these, I was on the phone – not e-mail – with product support, and there was no way I’d have figured out how to get it up and running on my own in either attempt. There’s plenty of videos and helpful manuals available, and there’s even macros which “automatically” set up the über complex battery of software which much be installed and DAW configurations made, but I was never able to make it work. In both cases, the good folks at Slate took control of my computer and did things I didn’t understand to get it all working. It’s also a little squirrely. In

Pro Tools, if you scroll to the last channels of the mix, whatever channels don’t fill the screen are inaccessible to Raven. In other words, you must have a full screen of channels in order for it to work. About 1 time in 10, the software won’t connect with a DAW upon boot and a restart is required. Also, the screen is limited to 1920X1080 which in most cases is fine, but if you need to jump into Photoshop or work in an NLE where you’re looking at 6K footage, you’ve got a bit of an issue.

seamless integration with several prominent DAWs (all have MIDI)

Built in interface to help facilitate working in DAW environment

Extremely difficult to set up – and will likely require Slate help

No direct interface with the DAW, overlay software is required

Cannot be used as a USB hub. There’s only one USB port and you use it to connect to the computer.

It says it has built in stereo speakers, but I’ve not been able to get them working.

Generally, we love this thing, and we use it as much as we can specifically around pushing faders. There’s a host of other

applications which it can be used for including complex clip editing and more. We wish the software was a little less buggy, and we wish the screen had better resolution, but for an affordable control surface, you can’t beat the Raven MTi2. It’s rad. We give it a 118 CS Rating. If you’re to the stage where you need better fader control and a workspace which has clients Rave(n)-ing, take a good look at the MTi2 and see if it doesn’t fit the bill.

Dialog Shootout with Shotguns from Saramonic TM-7 vs. TM-1!