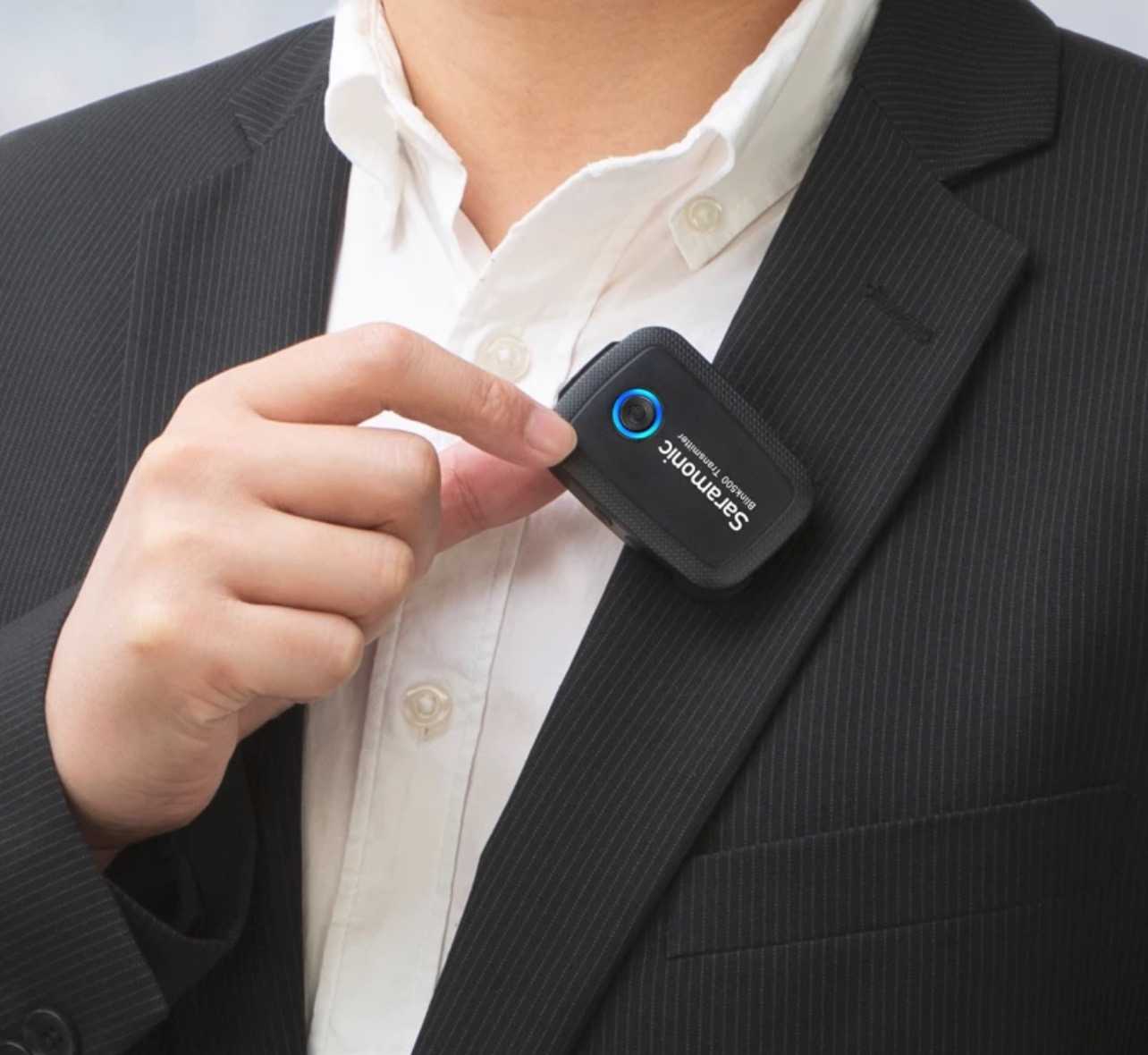 With a simple clip, you've got great wireless audio on talent in seconds.

I’ve been saying for years that folks need to STOP putting microphones on their cameras and use shotguns or lavalier/wireless systems to get clean audio for their productions. The massive amount of issues using an on-camera (absolutely NEVER, EVER using an in-camera mic) microphone are myriad: horrible A/Ds, D/As, bad recording codecs, bad audio electronics, sub-standard connectors, noisy preamps audio delay on distances longer than 15 ft….the list goes on. So for everyone who CAN set up an audio situation, you SHOULD be using a secondary recorder for your audio. But this never holds for folks who are doing ENG, run-and-gun and/or reality. There’s just no time to set anything up. You’ve got to get great sound with the mic you’ve got on your camera. For such a purpose we certainly have suggestions including the Saramonic TM-7, VMic Pro, and CamMic – depending on your situation and budget. But it’s really only a stop-gap. What if an ENG shooter could, in seconds, have a lavalier-quality solution for anyone while being on the go? Wouldn’t that be amazing? Well, that day has arrived in the form of the Blink 500 wireless system from Saramonic. Let’s take a look and do a little review of this game-changing product.

Wireless Lavs are an easy and, now, reasonably inexpensive way to get great audio while hiding audio gear from camera. Sticking a lav mic in someone’s hair or under their shirt with a Rycote is so common now, we’ve come to expect it as normal. Not too long ago, that was a pretty cool and novel thing to do. But none of this has helped the ENG/Run-and-gunner shooter. She doesn’t have time to lav someone up. She’s in the middle of a war-zone or an NFL game, and there’s no way she can stop her interviewee to “lav them up.” Thus the advent of the “stick mic.” It’s a great solution: the interviewer controls the speaking by just pointing the thing at the mouth of the person she wants to be heard. That mic, like the UWMic 9 HU9 system from Saramonic, has big rejection of everything but what’s right in front of the diaphragm,and it’s a nearly indestructible mic. And it’s wireless. In fact, it works with any UWMic 9 system. Dope.

But she’s stuck if she wants to have two people talking at once. I mean, unless she wants to get up-close and personal with the interviewee -which would look sort of silly. Or, what about where the interviewee turns their head away from the mic? Gone. Can’t hear them any more. We hear this happen on the news all the time. The stick mic’s polar pattern will miss off-axis sound even if it’s the interviewee’s own voice.

To be able to have a situation where the interviewer can quickly clip a mic onto a piece of clothing of the interviewee in seconds without any kind of cable issue or separate transmitter would be a huge win – especially if the microphone were omnidirectional like a lav.

This technology has been around for a while, but it’s been available in the $1,600/channel zone. Boo. The Blink 500 system, now, is able to get shooters two channels of this kind of wireless audio for less than $300. Yep. Just like the UWmic9, two transmitters which go into one receiver. Dope.

The Blink 500 system comes with 2X Transmitters, a Receiver, a lavalier omnidirectional mic, and all the cables you’d need to get it to your phone or camera. The units are all usb chargeable and last up to 5 hours during regular use. They pair via a typical bluetooth protocol – even though they’re wifi. And as is the case (no pun intended) with all Saramonic gear, the box the system comes in is fit for storage and travel.

The lavaliers which come with the systems are very similar in sound and output to the variety which come with the UWmic9 (they might just be the same thing). This means they’re SUPER LOUD output, and can be used in any powered 3.5mm port. We tested them in Røde, Saramonic and other 3.5mm inputs. They performed just like the UWmic9 lavs do: superior compared to anything in its price class.

But the GENIUS part of the Blink 500 system is the transmitters themselves. While they have the 3.5mm port for the lav, they have another grilled port on the top of the transmitter for another microphone. This mic appears to have a quasi omni-directional polar pattern. It’s quasi because it doesn’t sound as good from the bottom as it does from the top of the port. This microphone is plenty high-fidelity enough to get good audio from a speaking subject. Naturally, the closer you clip the transmitter to the “noise hole” of the subject, the better the sound. And although the output of this microphone is about 4.5 dB less than the input of the included lav (which is super loud), it’s plenty strong to reproduce a good audio signal fit for dialog – and this happens without a single cable to be seen.

To Lav or not to Lav

On the Sound Advice Tour I used to joke with attendees about the impossibility of having a “wireless microphone,” since every microphone has a cable – if even it is to the transmitter. And while that’s still the case, does it matter functionally if the cable from the mic is encased in a housing? The Blink 500 system is as close to a true “wireless” system as we’ve seen.

So this begs the question: why would we ever want to use the included lavs? Well, although the “transmitter mics” are good, they’re no match for a properly attached lavalier microphone. And, fortunately, the included Saramonic lavs are, again, superior: super loud output and excellent bassy frequency response. If you have the time, connecting the lav to talent is still the better option. But if you don’t have the time, the transmitter microphones on the Blink 500 system are infinitely better than any stick-mic or on-camera solution. Especially when needing more than one person speaking at a time is needed. Since the Blink 500 system comes with two transmitters, you can mic up two survivors of the holocaust and have a mic for yourself – and run them all to camera in a jif. Two clips, and you’re camera audio is ready to go before zombies eat your brains.

Sounds Too Good to be True

Well, there’s no free lunch. And the good folks at Saramonic had to cut corners somewhere to get the price point down to $249 for this system. The place they didn’t cut corners is on the lavalier mics or cables. but, after several hours of working with the system in two different iterations, we’ve got some notes as to how to get the most out of the Blink 500 system – and get around its shortcomings.

In the final analysis, we’re pretty excited about this system. We believe it’s going to revolutionize the ENG/Run-and-Gun shooters’ lives for the better, and perhaps have our on-camera hosts be able to do away with the silly stick-mic altogether. As a result, the Saramonic Blink 500 system receives a CS Rating.

If you are a Cinema Sound member, you can receive 10% off everything at the Saramonicusa.com site. Click here and become a member today!