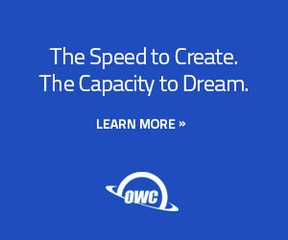 If you’ve been a member of Cinema Sound for a few months, you’ve undoubtedly read the 5-part article on dealing with hard drive storage issues for audio workflows. It’s critical you understand about this and purge yourself of any fear you might have around backing up your data or understanding how RAIDs work. In this article, I’m going to review the OWC Mercury Elite Pro hard drive enclosure, because having sure and speedy data storage is just as important as having the best speakers, mics and software.

First of all, I’m so excited to announce that OWC is now an official sponsor of Cinema Sound…and after the hell

we’ve gone through managing over 48 TB of data for the 85+ hour MZed Pro Member Education, having a partner as innovative and trusted as OWC on board is a god-send. Ever tried to use old enclosures with “new” hard drives and mix and match with three different creatives across the nation – each with a 16 TB footprint – and do it all with USB 3? Yeah. What a crazy mess… and so it was….for 18 months.

The biggest issue being this: you can have 200 MB/s physical drive mechanisms, but how do you connect them into your computer? Sure, put them IN your computer…but you’ve only got a finite amount of slots via internal SATA. Then what? Sure, USB 3/eSATA, but you’ve got the same problem there: there’s only so many slots you can use to get port multipliers working – or want to work without crashing your media software. So you have to go to external drive enclosures. Sounds like a great idea, right? Sure. In fact, they’ll even do RAID for you – built in: 0, 1, 4, 5, JBOD…whatever. Sure. Go buy yourself a 4 slot MediaSonic Box. Plug it into your USB 3/eSata port. Drop 4 200 MB/s drives in there. Run a data throughput diagnostic.

You know there’s a problem when there’s a typo on the description itself. What do the numbers mean? 5 Gbps = 625 Mbp/s. But you know what you’ll get? 250 MB/s in and out. Capped. Yeah. Stupid. That’s with 4 drives. Same thing with 2 drives. You should be seeing 380-420 with two drives alone…but no. Capped. It’s the same thing with Terramaster, Mobius, Startech – you name it. When you speak to the manufacturer they rattle off something about a problem between your USB “Chipset” and theirs. But when you press them about upgrading to their preferred chipset USB 3 card, they admit that it won’t make a difference. Yeah. Crazy. It’s slightly better with eSATA. Slightly. Amazon has received a whole lot of these enclosures back from us in the last year. Now, if you have a bunch of older and slower drives that you just want to us as backup, it’s fine. But if you’ve got some rocket ship drives, you’re going to need some kind of enclosure which will unlock and unbottleneck your data-thrust.

As a sponsor, Other World Computing sent us three items for us to examine and ultimately introduce to you

independent media creatives: their Thunderbolt 3 dock, and Thunderbay 4 Mini (more on those in other articles) and their Mercury Elite Pro.

To look at the case of the Mercury Elite Pro, it’s pretty straightforward and unassuming: silver box with the usual ports and included cables and power supply – which, thankfully, isn’t a wall wart. Plug it in, and it makes the appropriate noises. It comes with about $100 in software which of all types, thanks to the included installers can remain on your drive after formatting or be copied somewhere else in your computer landscape.

Then I whip up the BlackMagic Designs bandwidth tester. I’ve got the drive plugged into the same USB 3 port the other failed enclosures were. I’m expecting to see 350 MB/s out of 2 drives. But instead, I see a steady 400 MB/s with bursts out to 550. What!? Incredible.

Then I take my RAID 5 array consisting of 5 drives connected via independent USB ports and brought together with SoftRAID (which apparently is the controlling built in software for OWC devices) and copy 7.5 TB to the 10 TB Mercury Elite. The files consisted of mainly video and audio files. My RAID 5 array will happily do 650 MB/s read and 550 MB/s write (constant). For several hours this two drive mechanism did between 280-350 MB/s.

From a simple bandwidth situation, this enclosure holds nothing back from the drives. We haven’t tested it long enough to know how it does with power supply failure rates (our biggest issues with Lacie and WD drive enclosures), but the fact that we were able to get full bandwidth from this on the same USB slots which nothing else will meant the Other World to us.

Also, you can purchase the enclosure by itself and BYOD (Bring Your Own Drives).

Now, the price isn’t the cheapest thing if you purchase a Mercury Elite with drives. If you BYOD, they’re on par if not cheaper than comparable products which – well – suck. Why are the drives more? Well, they’re better drives. Enough said. AND…if there’s ever a place to AVOID FALSE ECONOMY it’s in the purchase of the physical hard drives of your system. Backup drives? Sure. Buy many. Buy cheap. System drives? Consider just opening up your wallet to your local retailer and asking them to reach in and give you the best in return.

But looking at the chart above it’s painfully obvious that the value that the Mercury Elite Pro gives beats everything but the strictly internal Seagate mechanism. These are drives which we’ve used or referenced in-studio herein, and the speeds reflect our every-day use of them. Also notice that the SSD Drive which theoretically should kill all these drives in terms of speed, when plugged into a USB 3 slot doesn’t do a lot better

than the Mercury Elite Pro.

how fast or how reliable – this isn’t the box for you. The MediaSonic stuff works fine, and has been reliable for us – if also so very slow. But if you’re keen on unfettered speed and RAID reliability (thanks to the built in SoftRAID which we wholeheartedly recommend for your desktop), the Mercury Elite Pro is still a better value than most for an enclosure which won’t require you to call tech support and figure out how to get it to do what it was advertised to do.

We love this thing, and we’ll be slowly replacing our dual drive enclosures with these over the next year. The Mercury Elite receives a 123 CS Rating.