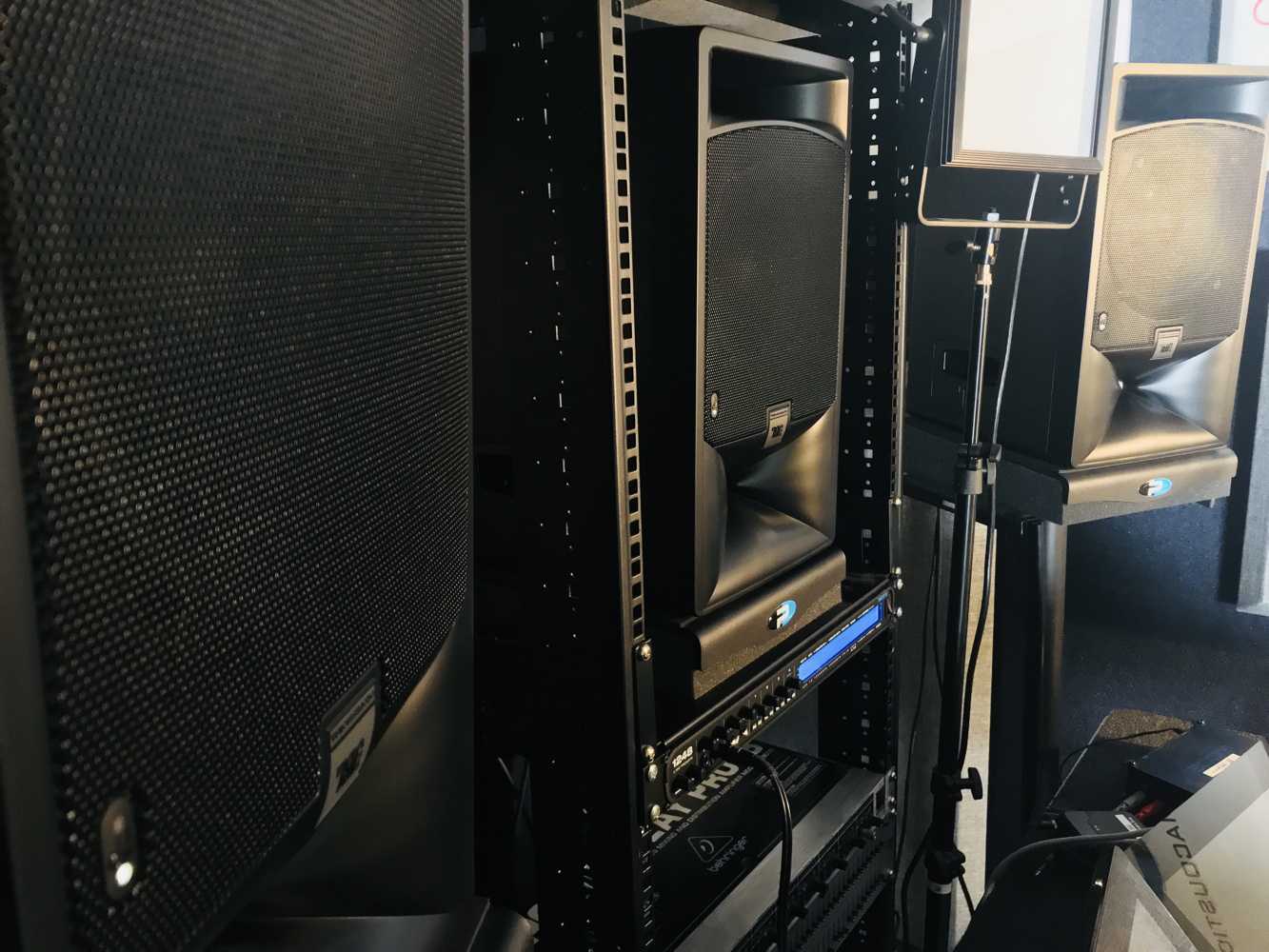 We LOVE JBL loudspeakers. Whether it’s Screen Array monsters or Control 1s, we love ’em and we’ve used just about all the studio reference level models they’ve produced in the last few years. But this latest iteration of JBL’s flagship takes what we thought was otherwise the best thing there was, and improves on it. We give you: the Series 7 speaker review.

you can afford. Our bottom line/entry level recommendation being the JBL LSR 305s. Well, back when we made the education they were in their MK I form. The MK II for us is a quantum leap from the MK Is, and for under $175 each, you should go get 12 of them. But if unmatched perfection in listening to mixes is required and nothing else will do, you’ll be paying about the same price for each speaker as you do for those 12 305s…and with good reason. Once you enter the $2k/channel zone, the speakers had better be able to reproduce your mix at a flat and unbiased level which, room issues aside, should translate everywhere unswervingly in every way.

We’d tried all kinds of fad speakers from KRK (never again), Tannoy (fine but passive) , Mackie (fine but no bass

snap or clear upper lows), Genelec (great for recording but totally tiring to mix on) and never had good results. It wasn’t until Michael Lehmann Boddicker switched to JBL LSR 6328ps that we found gold: mixes just worked. And we could work for 17 hours without fatigue ( at 80 db DX norm). Well…ear fatigue anyway. We purchased a set which you can see in the MZed Pro Member Education and, of course, we have them at Cinema Sound. And at $1,500/channel to have such incredible microscopic and beautiful views into our mixes from 75 dB to 95 dB, we couldn’t have been more thrilled…we thought….

Until NAMM 2017 when JBL unveiled the Series 7 708Ps next to their 705 and large format speakers. They all sounded clearer, more precise and snappier than anything I’d ever heard…and this was in the notoriously horrific listening environment of the NAMM show. We’ve been waiting for a set to arrive at our studio for over a year, and when they finally arrived, we quickly removed the 6328Ps we’d come to love so much, and replaced them with

the 708ps… I was paralyzed as I listened to the mixes we’d just been working on. It was like being in a different studio. I’ll explain why below, but it’ll suffice to say that we’ve been blown away by everything about them (including being a little bit easier to lift).

They’re Nice To Listen To

There are several ways in which I know a speaker is world class. I won’t tell you here what all of those are – ask here on the blog if you’re interested. One of the things is: are they nice to listen to? Do you want to

just sit down and enjoy them? I remember when I went from Tannoy PBM 8s to the Mackie HR824s years ago, I had my first sense of this. The Tannoys were fine, but sitting in front of active monitors after several years of passive speakers fighting with their amp…it was palpable. The jump from Mackies to the 6328ps was the next cut-it-with-a-knife experience. I loved mixing on the JBLs. I loved writing music with them. I loved listening to my competitor’s music on them. I didn’t get mad. But the Series 7s are that once again. Now, to be fair, we’ve not

heard the passive/need-an-amp models, and therein the amp will have a lot to do with their response – but honestly – those active models are just aaaamazing. The 705ps are exactly the same. In fact, at the aforementioned NAMM show, they had the 705s on, and we listeners couldn’t tell the difference between they and their 708 counterparts – except in the low frequency range (which was muddled by the NAMM din anyhow). We had folks with their heads in the 708s making sure they weren’t on.

If there were a critique of JBL nearfield speakers it is the bass reflex position. You know: the hole in the cabinet. It’s

typically in the back on a JBL. Even on the 6328s, the low frequency power has to hit a wall…or resonate it… in order to bend around to the listening. Of course, this isn’t exactly true, since the woofer itself is still on the front, but there’s always something lost when the “air” and “pump” of the woofer is directed away from the listening position. Now, it never stopped the 6328s from pumping killer snappy lows, but it did make for more difficult isolation in the studio and a different power curve.

The Series 7s have that port on the front. Wonderful. This means that the low frequencies will “vector” around inside the cabinet and gain resonance and then be sent forward. Now, keen readers will immediately respond with concern about low frequency phase issues, since those lows will come significantly later than the primary woofer’s output. Perhaps. It’s also why the 6328s had so little of that kind of thing. But the Series 7s have magically figured out how to mitigate that. We’ve detected more in phase lows and far better transient response in the low frequencies. Plus…hey…it’s fun to feel a little air when Godzilla smashes another car.

whacky detents. It’s all digital now. Everything is controlled by scalable digital interfaces via menus on the back of a backlit display: EQ, level, sensitivity, input type and even speaker name are all controlled from the back of the unit digitally. So. Much. Nicer.

The ability to accurately pinpoint a sound in stereo/surround space is one of the most crucial requirements of any speaker. At first look, the return to a “horn style” tweeter might be thought of as “old skool.” But if it is old skool, then it’s true that “they don’t make them like they used to” because the spatial accuracy is even more improved than in the already brutally accurate 6328ps. In surround, in particular, we were able to keep finite placement between a dense array of sound effects and foley. This microscope also had us able to find some spatial clashing issues we weren’t quite noticing before.

There’s a lot of techno-talk on the JBL site about how they’ve changed the high frequency monitoring capabilities of the Series 7 and why the new tweeter/horn assembly is superior…but I don’t actually understand it. All I know is that in the end, these speakers are the best I’ve ever heard in spatial reference.

For us, in the world of nearfield monitors, the Series 7s are a pinnacle predator among the wolves of $2k/channel competitors. Here’s how they break down to us:

That’s it. You go get yourself a pair and call us liars. We dare you. They’re great. It’s why they get a 123 CS Rating. Yes, they could be a general CS rating higher, but the value rating is lower than it’s predecessor, because basically, for a great speaker from JBL you don’t have to spend $4k on a pair – since you can pick up a pair of LSR 6328ps right now for about $2k. And are the Series 7s twice as good as the 6328s? No. But they are significantly better. It’s why the lower value score…but DO take a look at the fidelity and form scores – the fidelity score being our HIGHEST we can rate. These are no joke. And if you want to to flat mixes which translate – and even enjoy your favorite music – these are the first speakers we’ve ever heard which can do both.

Shootout with Sony A6300, Saramonic Vmic & Vmic Pro for Dialog