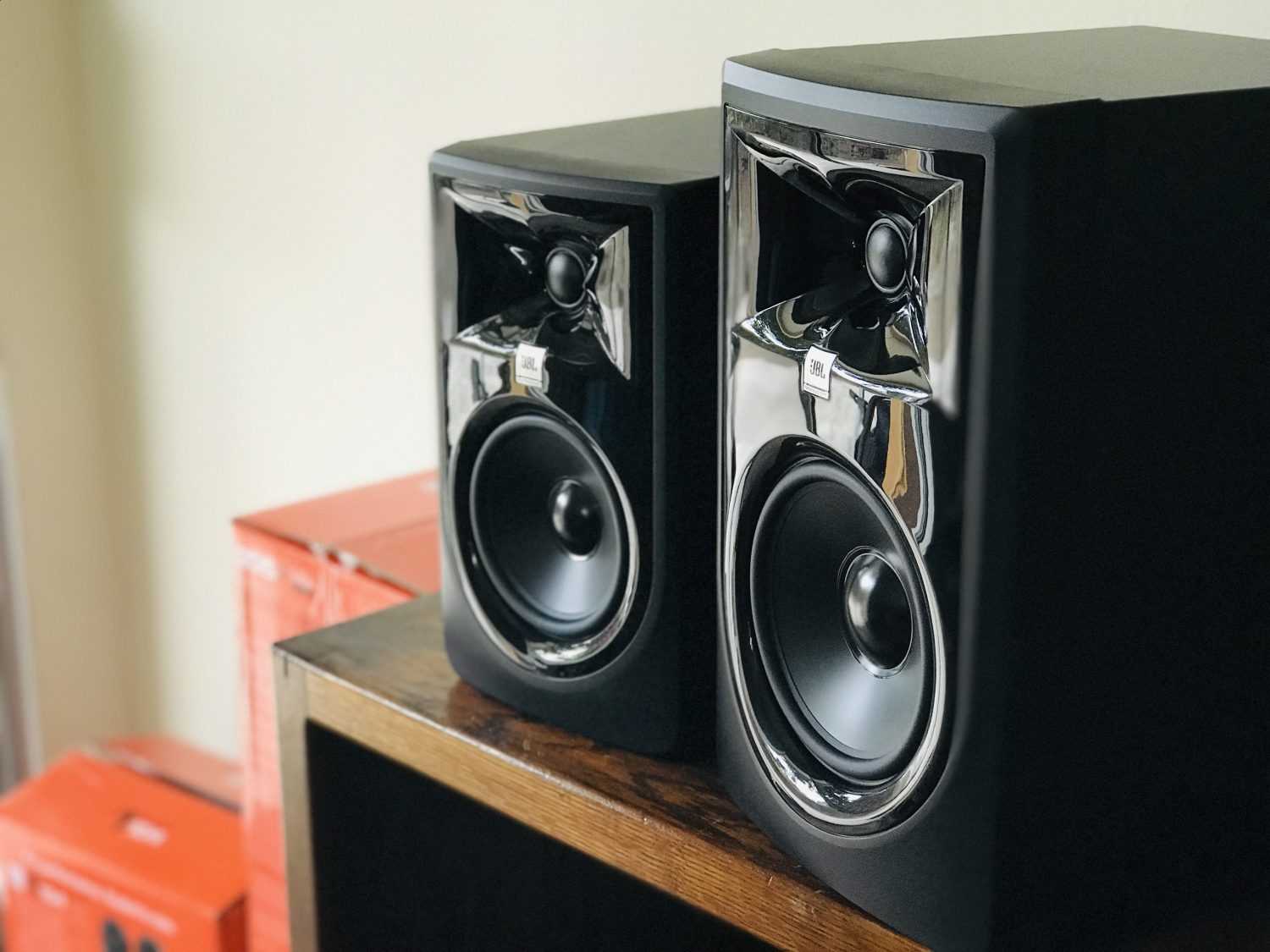 When it comes to choosing the right nearfield monitor for your edit bay or studio, it’s a jungle. Most media creatives and editors don’t even know what to look or listen for to make the right choice. Most of the time it comes down to how it makes their “music sound” or a recommendation from a friend – who listens to their mixes on Bose PC speakers. Choosing the right nearfield monitor for your timelines is perhaps the most important gear decision you’ll make as a media creative and you don’t want to mess it up. We’ve been talking about the LSR 305 MKIIs (and 1s) for years, but enter the new, larger 306P MKII. Does this newcomer measure up? We’ll find out in the Cinema Sound review below of the JBL LSR 306p MKII.

When choosing a nearfield monitor for audio editing or mixing, you’ll want its sound to be as “flat” as possible. This means that all frequencies in the hearing spectrum are represented equally. Why? This way, you know that whatever hyped up Bose or other system your mix plays on will have had a great sound without any such hype, and the chances of your mix translating as you intend becomes very high. We speak about the frequency plots in the real-world on several speakers here.

We’ve also discussed the incredible importance of having a speaker with a sharp transient response ie: the speaker can easily reproduce sharp transients which the paper or titanium drivers physically have to strain to reproduce. We demonstrate the various responses of speakers in this article.

Ultimately, however, regardless of the transient response or frequency plot, you have to like the sound of the speaker you’re using. Much like a microphone, you really can’t choose a speaker unless you can hear it. And while we DO have a large archive of microphones you can listen to on the Cinema Sound Microphone Archive, it’s not possible to do the same for speakers. The best case is to try to buy them on Amazon. If you hate them, return them. As for “liking” the sound, you should feel comfortable working with them at 80 dB for 10 hours or more.

Of course each speaker and frequency plot has its own use. For example: a speaker with a strong mid-high or high frequency shelf boost might be excellent for tracking music or VO, since with such a speaker you can more easily detect issues of mouth noise or artifacts. Another example would be where you’re doing a lot of music mixing. You’ll want a speaker with accurate and sharp low frequencies to insure the body of the full-range sound of music is represented well.

But in the end, it’s a personal preference, and like each person’s hearing mechanism, each speaker choice is unique.

That said, there are some universal constants which always come into play which skew nearly all our recommendations for low-cost, high-value speaker choices for Cinema Sound Members and otherwise.

The Small and Mighty

For years we’ve recommended the venerable JBL LSR 305 speakers. We’ve put 14 of them into the Avenger’s STATION exhibit in Las Vegas, and dozens of Cinema Sound Members have purchased them to happy results. Recently, JBL released the MKII version of the speaker which solves nearly all of the subtle feature requests that we’ve had in an identical footprint package that has more power, flatter response and (unbelievably) even snappier bass response. Moreover, the price didn’t change. Crazy. The 305s are unique in that the pack a VERY portable and small ability to create incredibly translatable mixes in music and multimedia into a package that’s less than $300. Also, along with the LSR 3 Series Sub, a creative could get into a full 5.1 system of speakers for less than $1,000 – and have your neighbors calling the police in no time.

Bring In the Giants

While 5″ and 8″ variety of speakers abound in the dozens in the marketplace, 6″ speaker cabinets are generally rare. We were very excited to receive a pair of JBL’s newest release: the LSR 306p MKII and put them up against our experience of the 305 MKIIs. Our results aren’t very surprising, but are incredibly important.

We don’t know the exact materials used in the 306s, but they look identical to the 305s except that someone used a “enlargement” ray gun on the 306s at a 20% setting. The tweeter, bass reflex, cabinet, switches and mountings look to be made of identical materials. The woofer, naturally, is new in its 6″ mountings. Of course the 112 watt dual amplifier is around 20% more than the 305s at 82 watts which nearly matches the 20% larger woofer. And although the MKI 305 had the same amplifier output, we swear the MKII variety is louder – as an aside.

In The Real World

In terms of performance, I dropped the 306s next to my MKII 305s and played my favorite post mortem Michael Jackson record (“Excape”) which has plenty of sizzling 2K, 8K and 45 Hz. The 305s performed as admirably as ever, and I can’t recommend them enough to anyone who needs a 5″ speaker that will recreate a wonderful and flat sound. But when I turned on the 306s, I realized something important I hadn’t discovered in over 30 years of working in Hollywood audio.

You know when you’ve found the right car. It speaks to you. You come around a corner, see it, and something chemical goes off in your body. It’s instinct. You know it’s going to be your car. Same with a house. You walk in, and you say, “this is the place!” Same with your mate. You meet him/her in the grocery store or at coffee – or on set in my case – and you say to yourself, “is this the one?” but in your gut you know it’s true. I’d say the same thing about a speaker. I’ve had love affairs with plenty of speakers over the years, but it was never “love at first sight.”

It was always love at first listen.

And you know you have the right speaker when you’re listening and you get that silly grin on your face and that giddy feeling inside your chest. This is your speaker. The first speaker I ever had this experience with from JBL was the 6328p monitors we started using, first at Michael Lehmann Boddicker’s Sol 7 Mix and Post studios. I bought a pair and was never going to get rid of them – until the 708ps came out of course.

Don’t get me wrong, the 305s are amazing, but I never had an emotional reaction to them. I knew they were going to change the industry, but it really wasn’t “this is my speaker.” But I started smirking and feeling giddy when the snappy, ultra low frequency bottom of these babies lit up the studio. It’s like having all the awesomeness of the 305s – with extended bottom that is just as uniform and snappy as the 305s are. But in this case, those lows appear to go down to about 37 Hz. Incidentally, the old Mackie HR 824s with their passive sub-woofer went down that far – which made me get giddy as well – but with nearly ZERO sharp transient response. In the case of the 306s, because every aspect and cone of this speaker is actively connected to a great pair of amps, the sound coming out of them is super responsive even down to those depths. And given the larger enclosure for both drivers, the resonance from the cabinet is deep and uniform.

Now, of course, this thing is bigger than the 305s and you’re going to need to have a speaker stand that is far more robust than what you were using for the 305s. Seriously. Don’t put these on a flimsy stand. And yes, you’re going to need a recoil stabilizer for these, because the size of the woofer will have even more bass frequencies go down the stand and be lost. We talk about how to make your own stabilizers in the Cinema Sound Education for $5 a pair DIY.

In the end, we’re very happy with the bigger brothers of the 305s in the form of the 306s. Honestly, the biggest issue with them is the same issue we have with all prosumer JBL products: the self-noise. If you’re okay with the hiss coming from the speakers (at any amplifier setting) then there’s no reason for you not to upgrade.

As a result, we give the JBL LSR 306Ps a 123 CS rating (interestingly the same rating – but for different reasons as the review for the 708ps).

Now look, before you start thinking you don’t have to save up for a 708p pair, don’t make the mistake of thinking that these are pro-grade speakers. They’re not. These are for mixes that stay below 80 dB average at 48″ distance. They don’t quite have the power they need to keep distortion out of the picture at higher SPLs. But for everything but Cinema mixing at high extended levels, these things will render an excellent and translatable mix time and again – and there’s nothing anywhere in the market that competes with them for the price.

How to: Soundproof a Room for Recording & Listening