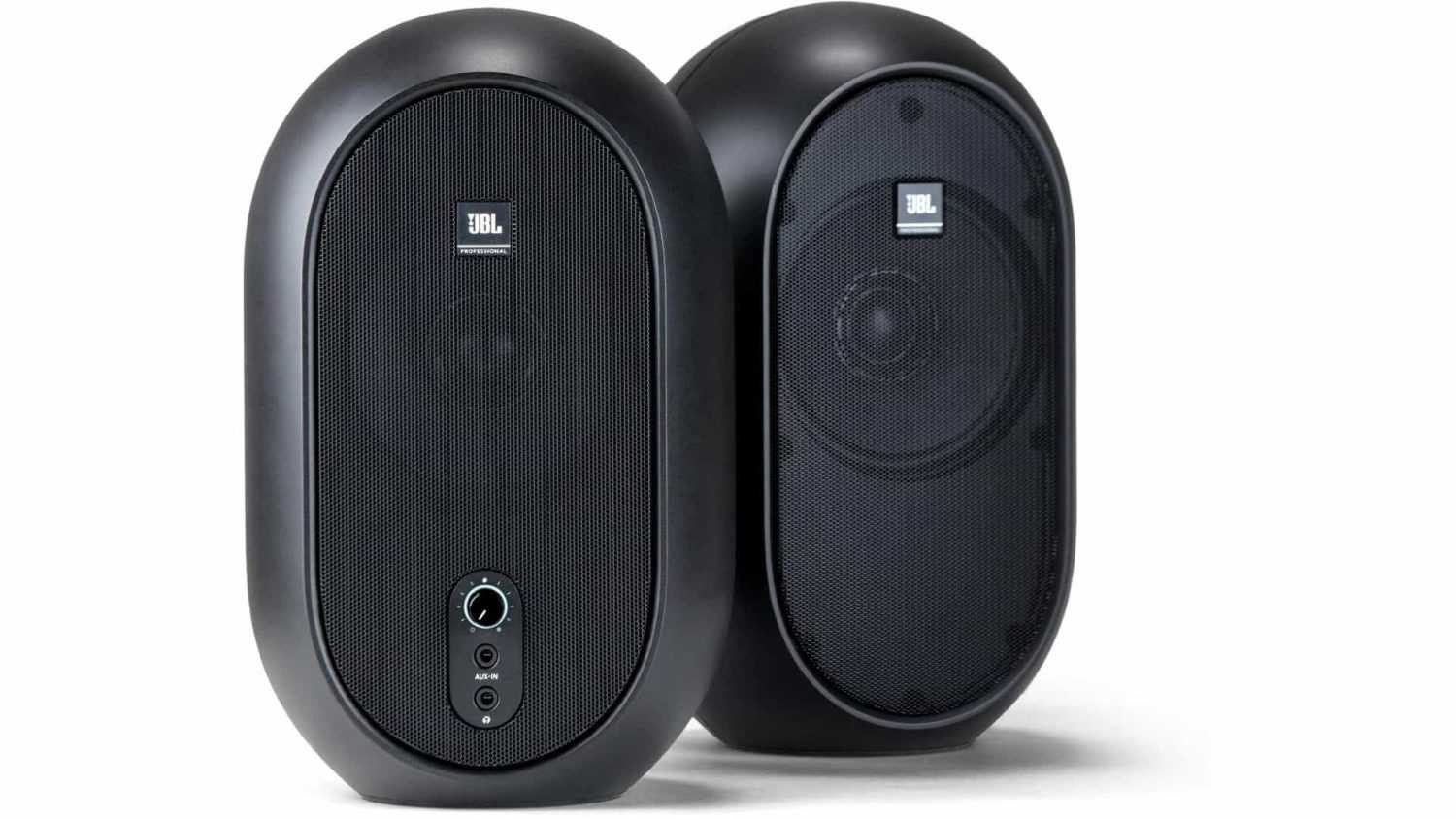 If you’ve spent any time at all here on Cinema Sound you know that we love JBL speakers. We’ve tested them in shootouts, Reviewed the Series 7 708Ps, the LSR 305s, 306s, even taken a look at the venerable 6328Ps. All of these professional-grade speakers have held up well in our studios and in Cinema Sound member studios. But we’ve never taken a look at their “prosumer” speakers until NAMM 2019 – where they introduced the 1 Series 104 Compact Powered Monitors to us. What follows is a review of these gems to see if the $149 price tag makes them a better value than their doubly priced LSR 305 MKII monitors – so yeah. This is a bit of a showdown as well.

In my college days my first pair of speakers of any kind were JBL Control 1s. Yeah. Those old passive speakers. Fortunately, they were driven by Crown power, so they actually did very well for me, and many a film score was produced in my college appartment. It wasn’t until I started mixing on the 6328Ps at Michael Boddicker’s Place that I returned to JBL after a long stint with Tannoy, Mackie, Genelec and others. The 6328 firmly cemented in me the value of JBL transducers. Mixed with the fact that the majority of speakers in theaters in North America are powered by JBL, having your home and pro studios powered by JBL is always going to be a good idea for media creators.e

But for a majority of folks, having $2,000/ speaker cabinets on their desks in their edit bay is just crazy talk. With space at a premium, finding a speaker that can fit on a desk and make translatable mixes while being affordable is the holy grail of editors and entry-level media producers. Historically (and horrifically), it usually takes the form of some kind of Bose system that’s designed for computer use and gameplay. Because of their hyped bass and highs, the mixes produced by these speakers are always shrill and mid-rangy and are the usual fair of the independent film festival.

With the advent of the JBL LSR 305s, however, that has changed. For $300 a pair you can have top-drawer translation capability with the cost of a small footprint on your desk. We’ve been recommending these to absolutely everyone – and everyone have been pleased. Just check some of our interviews with our members. And, just so you know, the 306s are EVEN CHEAPER than the 305s right now.

However, the 305s are no small cabinet if desktop space is a premium. Moreover, some folks feel daunted by having “legit speakers” on their desks when they just need something for reference that’s inexpensive and provides reasonable sound quality. Thus, JBL introduced a “suped up” version of my old-skool Control 1s. Taking the concept behind the Control 1 speaker, they’re introducing the “1 Series” and the 104 as it’s current flagship: the concept of a compact, active speaker system for use in gaming, edit bays and other prosumer needs with a tiny footprint and maximum power and translatability.

JBL is bringing forth the concept of a compact, active speaker system for use in gaming, edit bays and other prosumer needs with a tiny footprint and maximum power and translatability.

Let’s see how they did.

We have several kinds of JBL speakers to test any other speaker against. We took our 708ps, 305 MK Is, MK IIs, and 306 MKIIs and faced them off against the 104s. Obviously the 104s are the “small potatoes” size against the 5, 6, and 8″ cones of its bigger brethren. Also at 30 watts, they are the lowest power cabinet followed by the 305s at 82 watts (combined dual amp). In other words, these speakers aren’t meant to fill your house with powerful sound. These are meant for listening no more than 48″ away.

So far, everything seems fine in terms of spec and build. The 104 seems ready for action in its ruggedness and design. The only flimsy thing about them are the cables that connect the speaker which has the amplifier for both speakers inside (which is much heavier than the other) and the “unamplified” speaker. It’s actually an ingenious way to keep costs down without losing quality: have one amp in one speaker to power two. Just add cables. These cables are akin to something you’d see in a $75 Best Buy home theater system. The good news is that you can change them out if you don’t like them for pennies.

The thing that makes me nervous is the general concept of a single speaker design. Even my Control 1s were dual driver, and I’ve never heard a single driver system that sounds better than its use as a paper weight. In our interview with JBL a few weeks ago, they revealed that it’s been since the 1930s that Altec-Lansing (co-founder Lansing then decided to use all his initials and form JBL) broke away from single-driver models defining them to be sub-par. Well, I’d agree with him.

But what makes this design different than a single-driver system is the idea of coaxial positioning. It’s really a TWO driver system that looks and acts like a one-driver system (without the bad frequency response): the tweeter and woofer are occupying the same space and the same axis. Much like automobile speakers, a coaxial design assists in phase coherency, on-axis frequency response and, of course, saving space. Generally, it means you can move around and have them sideways or vertical and not have any of the issues talked about in this article.

Now, to be fair, if you’re trying to cause a cone to reproduce 50Hz and 15,000 Hz it’s just not physically possible given the current state of technology (basically pushing paper with a magnet). But in the case of the 104s, it’s clear JBL isn’t trying to get big bass out of the cabinets. So, I ran pink noise and my normal well-known mixes through them with nothing but hope in the face of my belief about coaxial speakers.

Again, we were super skeptical about this thing sounding like anything more than a Best Buy consumer special. What I experienced was something quite unreal.

Given that these are really directed toward the consumer/prosumer/non-pro market, I placed these in a terrible place to simulate where these might most often be used in a consumer environment: on my kitchen counter top. I used the 3.5mm jacks with the included dual RCA to 3.5mm cable (nice) and plugged the 3.5mm jack into my Macbook Pro, and let ‘er rip from iTunes. Michael Jackson, John Williams, Queen and, of course, Mark Edward Lewis.

The 30 watts-per-channel is a bit limiting on highly dynamic recordings. The volume just doesn’t go up that loud if the overall mix is something circa 1980s orchestral film score (ie, E.T. or Star Wars). But with a modern master, these 104s are WAY LOUDER than they need to be for close listening. And if you’ve ever tried to listen to music for enjoyment from the speakers on your laptop due to laziness (as I have hundreds of times), these things are going to blow your mind.

High frequencies are crisp, low frequencies are incredibly sharp and lows can easily be heard below 60 Hz (impossibly). Putting your hand over the rear mounted bass reflex port reveals the amount of power these little speakers wield. Covering the port kills off a majority of the bass frequencies (normal) but also seems to solve the 700-900 Hz bump that the housing definitely emphasizes. The good engineers at JBL had to cut some corners to get these speakers to sound good in a tiny footprint at this price point, and there is incredible low frequency response – but a definite “roar” bump as well as a bit of a bump around 1.75 kHz. 8 kHz also seems to suffer slightly, and mixing any kind of dialog on these should be done with care around sibilance levels.

As for spatially, I found them to be nominal. My experience is that everything showed up in the right places between left and right. Always remember to space the 104s as far apart as you are from them in order to create the “magic triangle.” Now, that said, because there is no horn enclosure and since this speaker is not a tweeter, but really a hyped-up mid-range speaker, high frequencies fall off pretty hard and fast when you’re off-axis. It’s important that the listener be directly in front of the speakers to get any kind of good reference. But if the goal is just to have a good general reference on audio while editing, these things are fun and super easy to use.

I drove the amp to distortion by jamming a hyped up output from my F8 recorder into the 104s. While it’s true 30 watts doesn’t get you very far, the engineers at JBL have miraculously used every ounce of power from this amp and kept distortion to a minimum all the way to its limit.

You get a glimpse of the technology around what’s happening when you drop strong bass drums through the 104s. The extrusion of the Class D speaker is shockingly far. And, again, the amount of air coming out of the bass reflex port is more than a nice breeze.

Here’s our final analysis of the 1 Series 104s:

My final analysis is: if you need a trustworthy speaker system which must have a small footprint, you’re just not going to do better than the 104s. They deliver more than they should from an enclosure that would otherwise be way too small to be useful. But for a small fist-sized footprint from each speaker, these things deliver like crazy. And, given they’re roughly $75 a speaker, the value for the 104s is quite high.

If, on the other hand, you’re looking for the best value and speaker which gives you a mix that can translate anywhere – where you can afford triple the footprint size and double the price – then the 104s should turn into the LSR 305s for you. We’ve been yelling about the 305s for years – and they’re really hard to beat. But the 104s are an excellent way to bring about high fidelity sound in an incredibly small package.

If you need just a simple and small footprint speaker system to give you a general use value, the 104s are going to do better than anything else you’re going to find in it’s size or price class. It’s why we give the 1 Series 104s a 100 CS rating. They’re built tough and ready for the road, but their fidelity and value don’t rate as high as more expensive JBL products. Pretty much, if you need small speakers for general listening, editing, computer listening, these are fine. Great, in fact. But if you need something that will get you the Hollywood unfair competitive advantage, you’ll need to look to a larger JBL speaker.

Review: Røde NewsShooter Kit. Does it Solve All Life’s Problems?