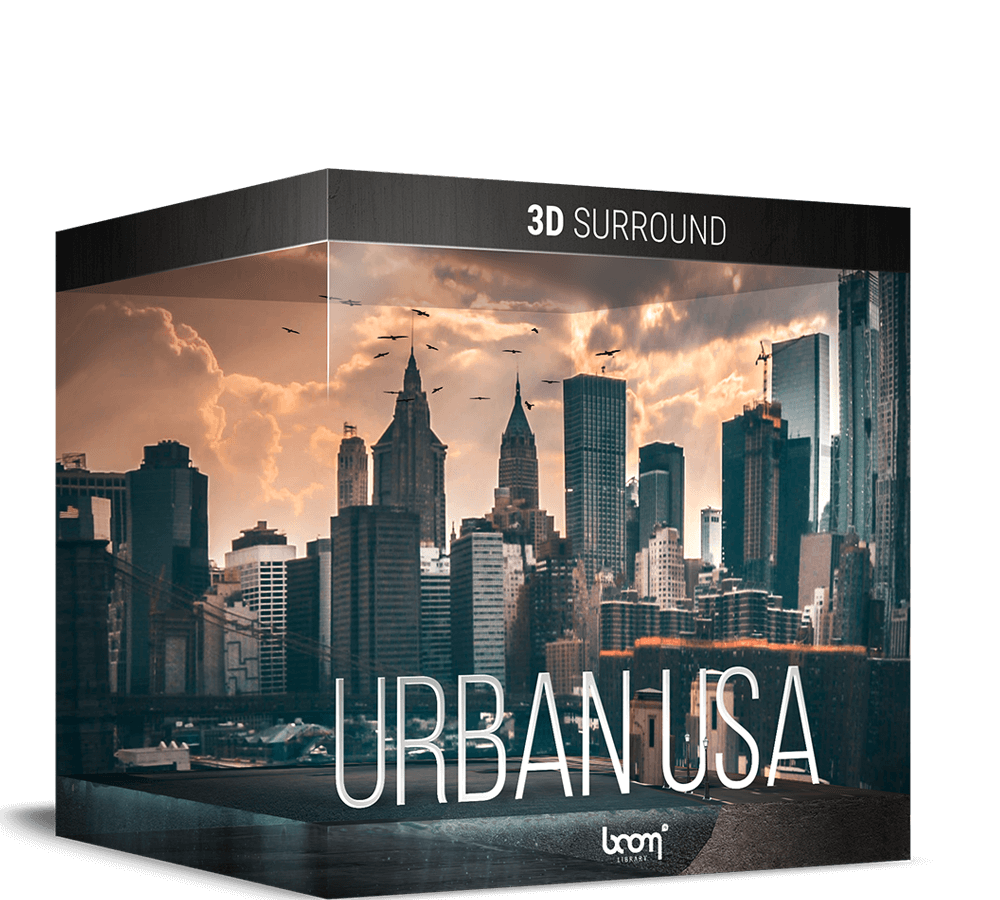 If you’ve watched any of the Cinema Sound Education then you know how important ambiences are to your production immersion. If you want to compete in the multimedia marketplace, then you’ve GOT to have great immersion – and great immersion comes from, among many things, great ambiences. Until recently, there’s really been no library that effectively covers the bases of what independent media creators need in order to create Hollywood-level audience impact from ambience use. In fact, Cinema Sound is working on its own library which will be available to Cinema Sound Members in the coming months. But it wasn’t until we found the Boom Ambience Libraries that we though, “hey, these might be exactly what we’ve been looking for.” This review of the Boom Ambience Libraries will put that to the test!

Generally, we hate sound effects libraries. There are several which are great, but most are rubbish. They usually have some kind of weird sound to them, are in weird and obviously up-sampled rates from low-rate recordings, or are sometimes even mono when they should be stereo/stereo when they should be mono. The one that gets me the most is the “nice fade in and out” they do on nearly all files. It basically means I have to spend the time to chop off their lousy fades so I can get what I need to crossfade. It doesn’t sound like a big deal, but when you’re dealing with over 30,000 sound files in a big feature – yeah – it gets old fast.

When it comes to ambience libraries, most of the attempts at it have been horrific. They have super loud levels so you have to bring the fader way down in the mix, those pesky fades, or just plain bad recordings. I even listened to one where you could hear the operator breathing. All of the libraries we’ve listened to until now have been in stereo. As you know from the Cinema Sound education, making a 5.1 or larger ambience from a stereo source is easy.

But to have a library which has been recorded in 3D as well as stereo makes things very interesting. I was a little confused from the box of the Boom Library Ambiences when it says that the sounds are compatible with all these 3D delivery formats – but what’s really going on is that the files are provided in the standard four-channel format which then you can process in post to be compatible in whatever format you want. These files are NOT compatible with ANYTHING out of the box except for in processing plugins that can handle 3D A/B-format, four channel recordings from microphones like the Sennheiser Ambeo, or the Soundfield SPS200 Mics. It’s not to put down the library in any way, but do note that if you don’t have plugin software which can translate these 3D libraries, you won’t be able to do the delivery that is required for, say, Facebook 3D or game work. But you probably knew that anyway. I was just a bit slow to figure this one out.

Another thing I’m leery of is having a “center” channel included in an ambience library. Worse, we’ve found libraries where important aspects of the sound were only present in that channel. Again, if you’ve looked at any of the Mix Volume of the Cinema Sound education you know that I’m always telling you to NOT have ambiences in the center. That said, what’s great about having source recordings in this four-channel 3D format is that you can determine the final output to be whatever you want. And as you’ll see reading onward, the good folks at Boom have really done a great job of recording sounds which pan well and create a great feel regardless of the channels you choose to use.

To make a great library of ambiences, you, first, have to have a lot of ambiences. The Boom libraries are currently broken into two kinds of libraries: the European Room Ambience library Called “Room Tones of Europe,” and the Urban USA Library. Both comprise over 160 GB of samples for the 3D files alone. The Stereo versions are even more. The Stereo samples are included with any purchase of the 3D libraries. Needless to say, this is a LOT of samples. There are over 400 patches to choose from. That’s pretty good.

Still, for the price, of $740 for everyone (for both libraries in 3D) except Cinema Sound members who get it for less than $640, we’d have expected about double that amount of patches. As for the Stereo value, it has the same amount of patches for $240 (both libraries) and under $205 for Cinema Sound members. This makes more sense – but of course you don’t get the entire surround files – just the stereo files which you have to live with their downconversion.

Again, let me stress, it’s easily possible to create full surround ambiences with stereo files. And…you don’t get the full immersive surround elements which are available in the full library.

How Can You Decide?:

We’ll have videos up soon about this library, what it sounds like in surround using Spatial Audio Designer for binaural headphones. We currently have the stereo versions demoed with these two videos:

The Cinema Sound Store also has Soundcloud.com samples of the libraries for you to audition.

What you’ll discover quickly is these sounds are impeccably recorded whether in stereo or surround. Especially the reasonably tricky-to-record room ambiences. There is nearly no perceptible self-noise from the equipment, and you’ll really enjoy just listening to these on loop to calm yourself in stressful situations. (as an aside) They’re beautifully recorded – and done so at 96kHz/24bit. The sign of a sound effects library design team who is serious about making a great recording.

Also, there are NO SILLY CROSSFADES – as you’ll see from the videos. It makes it so much easier to edit these ambience files to scene cuts and more.

Honestly, we’re a little jealous that we didn’t come out with a library like this first. We knew it was needed, but we’ve been full-tilt on the foley library so long that we just didn’t get to it fast enough. But that said, we’re very happy to be partnered with Boom to offer this to you all these libraries through us – and to Cinema Sound members at a discount which can’t be found anywhere else (except for Boom special sales which don’t happen that often). But given that these sounds are ready-to-go, and ready to purchase, we can’t be happier.

Get your copy of the libraries by clicking here.

To rate these libraries, we feel like they really need to be purchased together. The European Room Ambiences are incredible for interiors and the Urban USA Ambiences are incredible for the exteriors. If you buy one for your productions, you’re just going to have to buy the other soon enough! So we’ve delineated them as the 3D versions and the Stereo versions of both libraries together. Both versions have the same samples, but really have different features and value.

We’ve also created, for the first time, the Cinema Sound rating for Sound libraries since this is our first review of a sound library. We took the Software rating and turned “Friendly” into “Fidelity,” since fidelity is a critical element of any library and most libraries don’t suffer from being unfriendly to use.

As a result, the 3D library, although as far as we care, is the first of its kind to market, suffers a bit in the value department. At nearly $400 for patches which are far from “everything you’d ever need,” and given that any Cinema Sound member worth their salt can create easy surround ambiences from a stereo file, it’s just a bit much. We’re guessing that there will be more libraries coming out at the same price point, and it may be several volumes before a general “all-encompassing” library is finally released. The strengths of this library are the incredibly rich 3D recordings which have been skillfully recorded and edited. I should also mention here that each file has SoundMiner compatibility so finding and integrating these libraries into your search and file system is a simple SoundMiner import. But this is also the same for the stereo versions of the library. As such, the 3D versions of these libraries receives a 115 CS Rating.

Whether you want the industry cutting-edge standard on ambiences in 3D or you want them in stereo, you’re just not going to go wrong with theses two libraries, and we’re looking forward to more from them in the near future!

Click here to get your copy of these libraries!

Click here if you’d like to become a Cinema Sound member and receive 15% off these libraries and over 30% off the Cinema Sound Education!