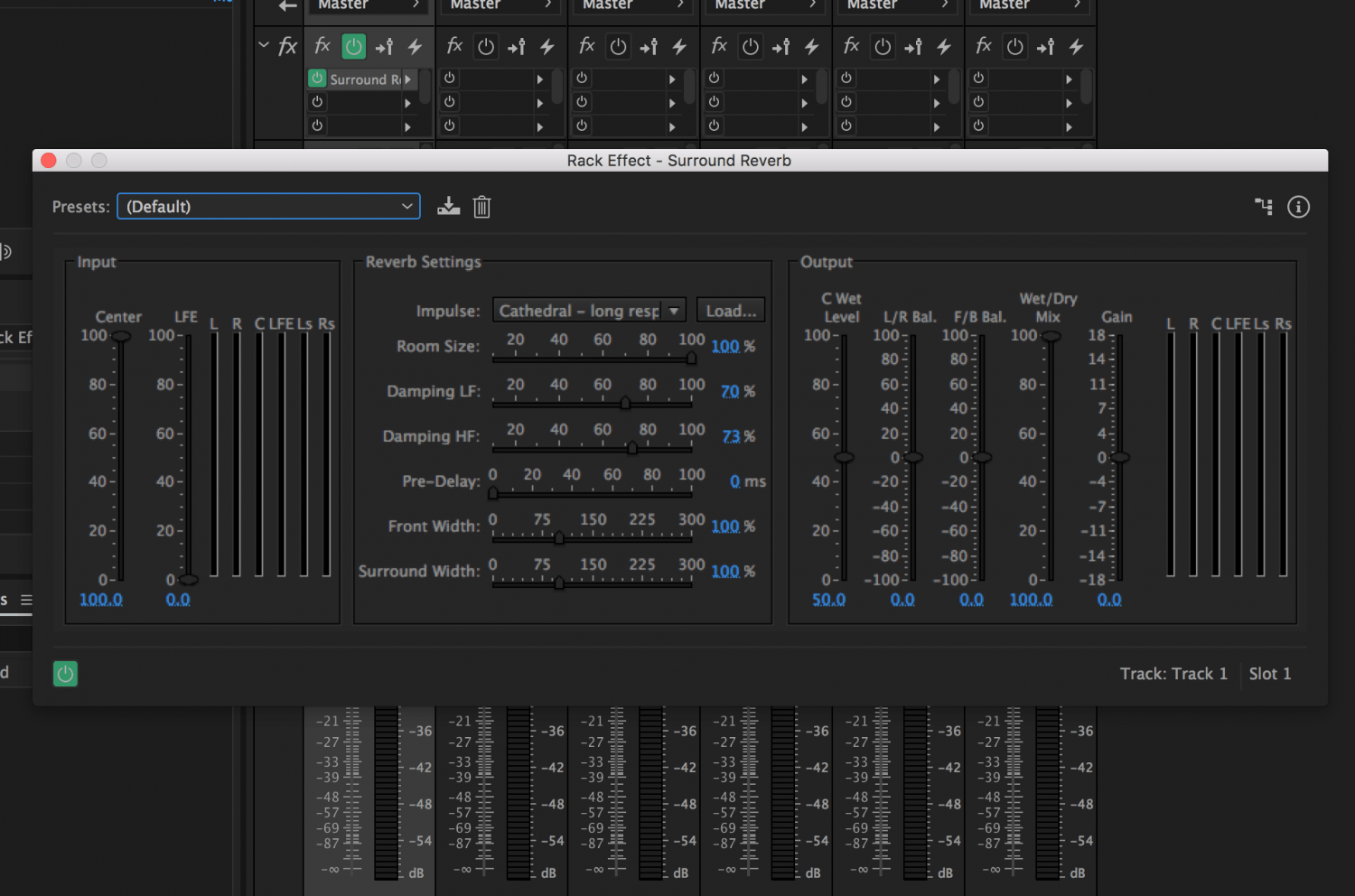 AA's Surround Convolution Reverb is one of the best.

There is a vast array of reverb plugins available to the modern filmmaker. As we’ve discussed in previous articles, knowing how to test for great value among reverbs is critical. In this review we put the Adobe Audition Convolution Reverb to the test in both its stereo and surround (5.1) capabilities.

Before Cinema Sound, I actually had zero experience with Adobe Audition. I was introduced to it – well, really forced to use it – while taking over for Frank Serafine on the Sound Advice tour back in 2015. The more I used it, the more I realized it’s power and potential for post production uses. Now, having had hundreds of hours of its use while building the 85+ hour education for Pro Members, myself and the Cinema Sound team have a pretty good understanding of what the good folks at Adobe are up to as they continue to advance this product toward being the mainstay DAW in Hollywood studios.

My real concern is that it be up to the standards of independent filmmakers in their studios. As we move through more articles about Audition over the next few months (as we, indeed will), I’ll be able to show you some of the incredible power which Audition has – which nearly no one knows about. But first, let’s look at it’s staple native reverb plugin: Convolution Reverb.

Every DAW has its own native effects. Many times these effects are barely worth the code used to make them. Notable exceptions to this cab be found in Pro Tools, SAW Studio, Cuebase and of course, Logic Pro. Audition is also exempt from this norm, but it is so for a very different reason. Because of the origins of Audition (from Cool Edit Pro), the program comes from a venerable tradition of radio and broadcast use. I’ve been accosted by many a broadcast mixer demanding that I understand that Audition is a faint whisper of what Cool Edit Pro was – and they’re still stalwartly using CEP. Good for them.

As a result, it feels like Audition’s recording and multi-track mixing capabilities are grafted to the original code instead of being at its core – unlike so many DAWs where mixing and recording were at their genesis. What does this mean? If you’ve spent any time working with AA plugins, you’ve noticed that they each have an embarrassment of controls. Even simple plugins have advanced tabs and sliders which, in some cases, even I’m not sure what they all do. But maximum flexibility and power are at the core of each of those plugins, and as I’ve always maintained, “a plugin (or device) isn’t professional if by turning it all the way up it doesn’t destroy everything.” AA’s plugins are the perfect example of this. It’s just that sometimes, it all just gets a little confusing and sometimes even difficult to do something simple and get a good, quick result. I was finally explained as to the reason for this a couple of months ago and, basically, it was because of Audition’s grandfather: CEP.

Reverbs are no different in this regard. In fact, unless you’re running a trash can Mac, half of the reverbs AA offers 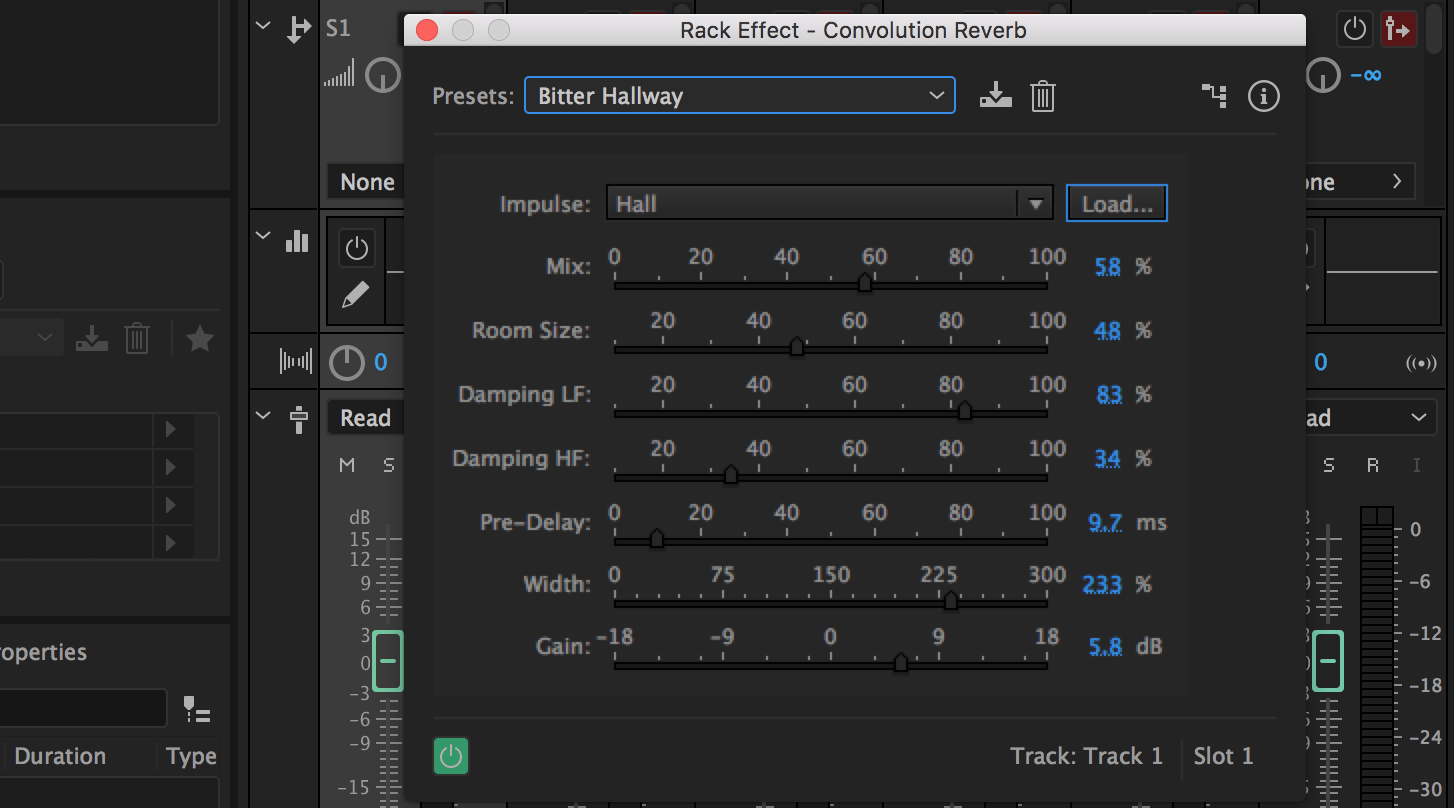 can’t be run in real time, because they are so processor intensive and have so much capability. But Convolution Reverb is happily able to run in real-time with your play marker – even the surround version. With this long preamble finished, let’s dive in.

If you’ve read the prior articles on how to test a reverb plugin to see if its worth its salt, I’m here to tell you that Convolution Reverb scores an 8 out of 10 in the quality of the sound of the reverb. It’s not the best sounding thing I’ve ever heard, but it’s quite good for use in a mix – especially where reverb times of less than 2 seconds are required. In the “Action Sequence” of the Pro Member Education we used it with a 5 second Impulse Response – and it sounded fantastic. Although, to be fair I should mention two things: 1. it did not recreate a perfect example of the room we shot. There were several elements present in the room which the Waves IR-L plugin DID accurate reproduce that Convolution Reverb did not. 2. For this review we used the built in preset IRs of which we have no way of knowing their quality.

That said, AA again breaks the rule of “you get what you pay for” by offering a strong contender for your main Loading IRs is one of the coolest things about AA’s CR plugin. Are you kidding? $50/month for ALL that CC gives you? That must be, like, $.25 a month for CR. Yeah. An incredible value for such a good reverb. Let’s look at a few of the controls:

At the top of the plugin are some highly useful presets with their own built in IRs. Once loaded, all of the rest of

the controls are only able to work to the extent that the IR allows. For example: if you’ve loaded a .4 second IR, running the “room size” slider all the way to the left will not garner you a 6 second reverb. This is the case with all convolution reverbs worth owning. The rest of the controls are pretty self-evident in their meaning and use: Mix control (wet/dry), the size of the room (within the context of the IR), high and low frequency damping of the reflections, the delay before the reverb begins, and overall gain.

Two of these settings are NOT self-evident: Width and the “load” button. Width is a cool control for taking the stereo width of the reverb and taking it from mono (all the way left) to über wide (all the way left). The full setting is also surprisingly mono compatible and is highly useful for getting a reverb “outside” the normal stereo field holophonically. But do beware, it’s confusing. A “zero” setting is mono. A “normal” stereo setting is 100. Sometimes the plugin will default to 150, which will sound great but may also be adding a boost in stereo width you don’t want. Of course, it doesn’t tell you this. Thank me later.

The “load” button is the most powerful aspect of AA’s CR, in that it allows you to load your own custom IRs, and have the power of the plugin and controls use it. It’s dope. If you’ve read the article on Impulse Responses, then you’ll know how to make your own and use them.

But here’s the thing about IRs in AA: You’ll likely have to load them every time you boot your session. Yes. Unfortunately, as of the writing of this article, AA won’t store them in the session or anywhere else. Worse, if you move them or lose them, AA won’t tell you that it couldn’t load them. You will only get a little red outline around the plugin which if you miss you’ll get no reverb at all from the plugin. I’ve had to reburn more than one mix,

because I’d moved the IRs somewhere, and AA wouldn’t find them or tell me about the missing IR files. Drag. I know they’re working on this, because I told them about this in person in Santa Cruz, CA at their corporate offices. Expect this behavior to be fixed soon. However, in the mean time, DOUBLE CHECK at each boot to insure they’ve all been loaded.

Let’s also briefly talk about the Surround Convolution Reverb in AA. Of course, I could do a review just for this plugin, but because it uses a similar interface and has a similar feel, I’ll do them together. First, let me say that AAs surround CR is one of the best I’ve ever used. It’s surround “feel” is like being in the room you did your IRs in. We loaded both presets and our own IRs into it and had stupendous results. While we’d give the surround CR the same 8 rating for the sound and richness of the reverb, it more than makes up for it with its surround implementation. You sort of get a silly grin on your face when you hear it. It’s also remarkably processor efficient, and we’ve been able to run several instances of it where something like Altiverb would choke our system like a python.

Also, it’s important to note the wild flexibility of both the input and output sections of this reverb. We go into

how to maximize this in the Pro Member Education, but it’ll suffice to say that you can easily make Quad reverbs out of the this surround reverb with a few sliders dropped. I also want to mention the incredible routing flexibility of the reverb. You can literally route any channel to another and bypass them in the AA routing matrix which is available on nearly every plugin in the DAW.

incredible wide surround reverb. You don’t even have to load a stereo IR. Nope! Tweet: You can load a MONO IR into both the surround and stereo CRs and get INCREDIBLE results. It’s like magic. Dump the lamest mono IR in, and BAMMO! Beautiful surround/stereo reverb. I don’t know how, but it works. I’m not suggesting you do this – always try to record a stereo IR, but if you don’t have one, you’re okay.

I think this is especially important for on set recordists who only have the capability to record mono IRs, because they never record stereo dialog. With AA, you can pull this off with ease. I’m aware that other convolution reverbs do the same thing: the aformentioned Waves IR-L will, but it doesn’t create the same beautiful immersion.

Overall, given a combination of the stereo and surround version of the Convolution Reverbs in AA, we give them a cumulative 118 CS Rating, but the surround reverb by itself would receive a 120 CS Rating. All in all, you’re never going to get a better value than with the built in reverb of Audobe Audition, and if you’re unfamiliar with it, I’ll suggest you rectify that with all haste.

Have you used Adobe Audition’s reverbs? Let us know, or Tweet about it!

Adobe Audition How To: De Esser

Music Mastering: Why You MUST Have It For Your Project