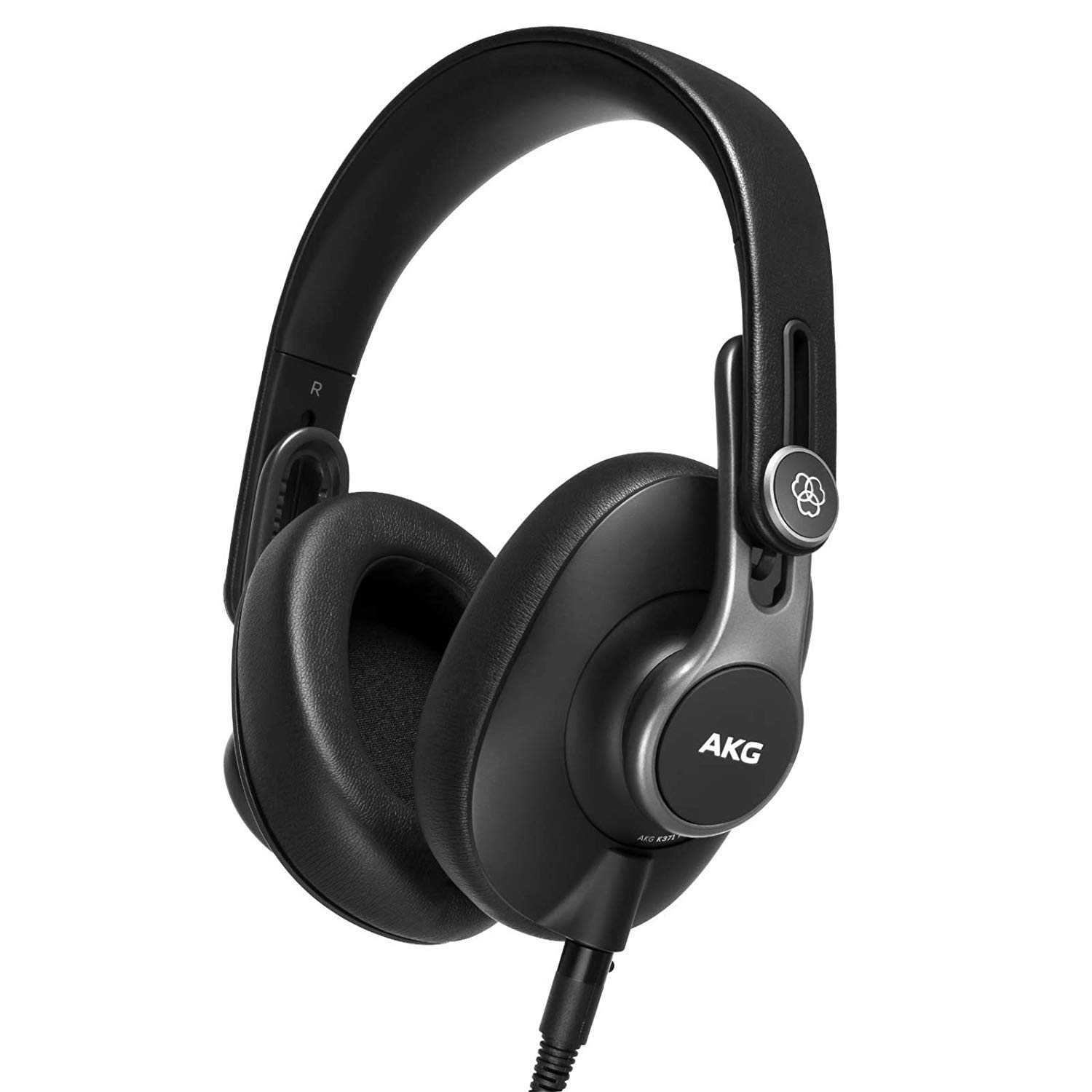 Not everyone likes headphones, but everyone MUST have a good pair. Not that we recommend doing final mixing exclusively on headphones, but there are some audio problems which can only be solved using headphones. And to that end, you need to have the right headphone for the right situation – and there’s no such thing as a “perfect headphone” for all situations. Moreover, unlike microphones or speakers, what you pay for in headphones is nearly always seen, penny-for-penny in the quality of the sound or comfort – or both. In other words, the more expensive the headphone, the better it is for its specific mission and the wider that mission can be. Spend $5 on a pair of earbuds at the airport, you can expect to get disgusting sound in all disciplines. Spend £3,495 for a pair of Stax SR-009s, and you’re going to have some of the best sounding headphones on the planet for everything – except generating a good mix. In this article, we’re going to review AKG’s new K371 headphones – not from any one discipline but from a few critical ratings we find important in multimedia production. So, here we go: AKG K371 review!

As stated above, no headphone is going to be good at everything. It’s the same with a speaker. You’d never take a JBL Screen Array III system – which is the venerable top-of-the-line de facto standard for re-recording studios and use it for a PA system in Angels’ Stadium. Similarly, you’d never take a Series 708P and use it in a theater array – or in an editor’s cubicle. I mean, sure you could, but they’re not designed for that kind of use (or abuse) and the desired result is going to be hard achieve. In a theater, you’re going to want big enough speakers which can output 105 dBSPL at about 30 feet (10 meters) or more with ease and a good frequency response. And while the Series 7s can do this in spades out to about 15 feet, beyond that, they’re going to be overdriven. Why not in the editor’s cubicle? Sure. You could. And what an awesome visual presentation it would be to any watching over the editor’s shoulder. But space is a premium in a cubicle, and the footprint of the Series 7s, were they to be properly placed so the editor is in the magic triangle – would mean that the screens the editor is using would either encroach on the speaker enclosures’ line-of-sight to the ears of the editor or the screens would be encroached by the speakers. Of course, you could hang them, but nobody’s going to let you run 45 feet of steel cable into the ceiling just for your cubicle. We want to be able to have the right speakers for the right application. It also means we probably need to have several sets of them to cover our bases if we’re doing on-set recording, re-recording, tracking/VO/ADR, or whatever else.

With headphones it’s no different. For us at Cinema Sound, our EX 29 branded headphones are excellent for getting rid of exterior noise without phase cancellation issues (which tends to destroy Binaural/3D headphone audio) while delivering one of the “flattest” frequency responses of any headphone. They’re certainly not a “party in the headphones,” but for accuracy in mixing, we love them. However, they may not be the best for tracking or recording. There, you’d want something with a mid-high to high frequency bump that helps you hear bogies and other noises which might be missed on flatter headphones. The Cinema Sound headphones make up for this with over 20 dBSPL of exterior noise rejection – but anywhere else, you’ll want to have something with some “edge.”

And of course, any headphones need to have comfort – especially if you’re wearing them for 8 hours a day or more. We never suggest headphones which are not over-ear, because the noise rejection from external sources is to small. That external noise too easily influences our brain to turn off sensitivity to sounds which could be important to hear in the program material.

Let’s mention here that unlike most headphones, these come beautifully packaged and include a carrying case, mini-XLR to 3.5mm pigtail cable (3m), 3.5mm to 1.4″ adapter, and two straight mini-XLR to 3.5mm cables, one 3m and one 1.2m – so you can just keep cables plugged in to various parts of the home or studio, and just disconnect them from the headphones with a simple button push of the mini-XLR. One of the great things about the mini-XLR choice is that the connection is FAR more robust than a standard 3.5mm connection and greatly resists damage from accidental yanks. It’s also a professional connection, and you could – in theory – send the K371s a signal from an XLR connection if it had headphone impedance.

In the table below, we compare the K371s with the Cinema Sound EX 29s in several areas which matter for various applications. We will then show you the standard Cinema Sound Rating. It should be noted that just about anything from AKG is going to a good investment. We still have a pair of AKG k240s from 20 years ago. They still work great. AKG’s service is superior, and the company has been around for decades and will be around for decades for anything else you meed need serviced. This, of course, applies to their microphones as well. I mean, is there a studio anywhere that doesn’t have some model of 414?

Here are the specs for the AKG K371s

Here are the specs for the EX-29 MKII

We’ll be contrasting the following aspects:

We took the AKG K371s, the Cinema Sound EX29 MKIIs, and some standard issue Apple Headphones as a reference and ran through them various kinds of music, dialog and pink noise from the output of an Apple laptop (late 2013)(3.5mm) and the headphone output of the Soundcraft Ui24R (1/4″). Three people were tested on each discipline and the average score of all was recorded. No one listened to the Max output discipline (since there would have been hearing damage). Instead, a decibel meter was placed between the two transducers about 1/4″ from each, simultaneously, against 1/4″ of shag carpet. The volume of the headphones was recorded slightly below the point of obvious distortion. At least that was the plan. But, we heard very little distortion even driving them well past the point of human ear pain. Ratings were from 1-10, 10 being best. Bold italicized numbers are the best in their discipline.

As you can see, both headphones scored quite well in nearly all categories. The K371s scored slightly better than the EX 29s did overall. For us, we LOVE the K371s, and would use them for just about anything including just enjoying music. The EX 29s win out as a 3D/Binaural/overall mixing headphone due to its flatter response, cleaner frequencies above 8K and superior external noise rejection.

Because the AKGs have a bump in the 2k-ish zone, it makes them naturally great at on-set sound-bogie catching. It also gives them a perceived loudness that isn’t actually louder. That bump also helps for tracking for the same reasons. In-studio noises are going to be better caught with phones which have a bit more mid-high/high edge.

Naturally, the Earbuds don’t rate very well at anything but comfort. Again, you get what you pay for, but they are a good reference, since just about everyone has them or some analog of them.

For us, AKG has again turned out an incredible pair of phones for the audio/video professional for a great price. It’s why we’ve given the AKG K371 headphones a CS Score of 120. If you’re looking for a great pair of headphones which are perfect for tracking or being on-set…or just a pair of headphones that a lot of fun to listen to, these are the ones for you!

Get your pair from Amazon by clicking here.

External Rejection: We noted that the cable connection which is a mini-XLR connection (which we successfully tested to work with our Saramonic Smart Mixer for connecting our 3.5mm Cannon C100) makes no small amount of noise when the user is in motion. Connected directly to the Left headphone, nearly any motion or impact on the cable disturbs listening.

Structure: It was felt that the flexible nature of the EX29s head piece, although it can be easily removed and replaced, also made the headphones feel a bit delicate. Also, Mark has had more than one of his headphones’ ear cushions fall off and need to be super glued back on (although he uses his incessantly every day).

Flat Frequency Response: The AKGs did not fare as well in this category, because – ironically they’re fun to listen to. Lots of super lows (spec takes these things to 5 Hz – and we believe it), a strong bump in the 1.8-3k zone and a general feel of “loudness” has their score be lower here. The EX 29s score quite high here, and is, really, one of their most redeeming qualities: flat frequency response. Generally, the EX29s have a super clean frequency response above 8K. However, the AKGs are vastly superior in handling bass – even if it’s a bit hyped.

Transient Response: Although there’s no really good way to test headphones for this (at least in our studio), we listened for the “leading edge” of highly transient music and punchy dialog. Here, ironically, we all felt like the Apple earbuds did the best – although the overall frequency responses was awful. This is perhaps due to it’s incredibly small diaphragm.

Noise Floor: The Apple Earbuds may have had a false reading for true noise floor, because they have a T/R/R/S connection, and there may be some added noise there from adapters which don’t accommodate that extra ring – whereas on the phone it is.

Max Volume: Even though the specs of these headphones says 114, we assure you, these babies are more than able to give beautifully crystal clear sound at a level which will not only cause you quick damage but also pain. Also note that the EX 29s felt like they were 1-2 dB less than the K371s when both had the same output fed to them.

On-Set: Several listeners felt that if you were stuck and had NO headphones, the Apple Earbuds would suffice for at least checking to be sure things were going down – and because of their hyped high frequencies were good for finding bogies – if they were driven loudly enough.

Cost: The Cinema Sound EX-29 Headphones are this price if you are a Cinema Sound Member. Otherwise, they are $140.