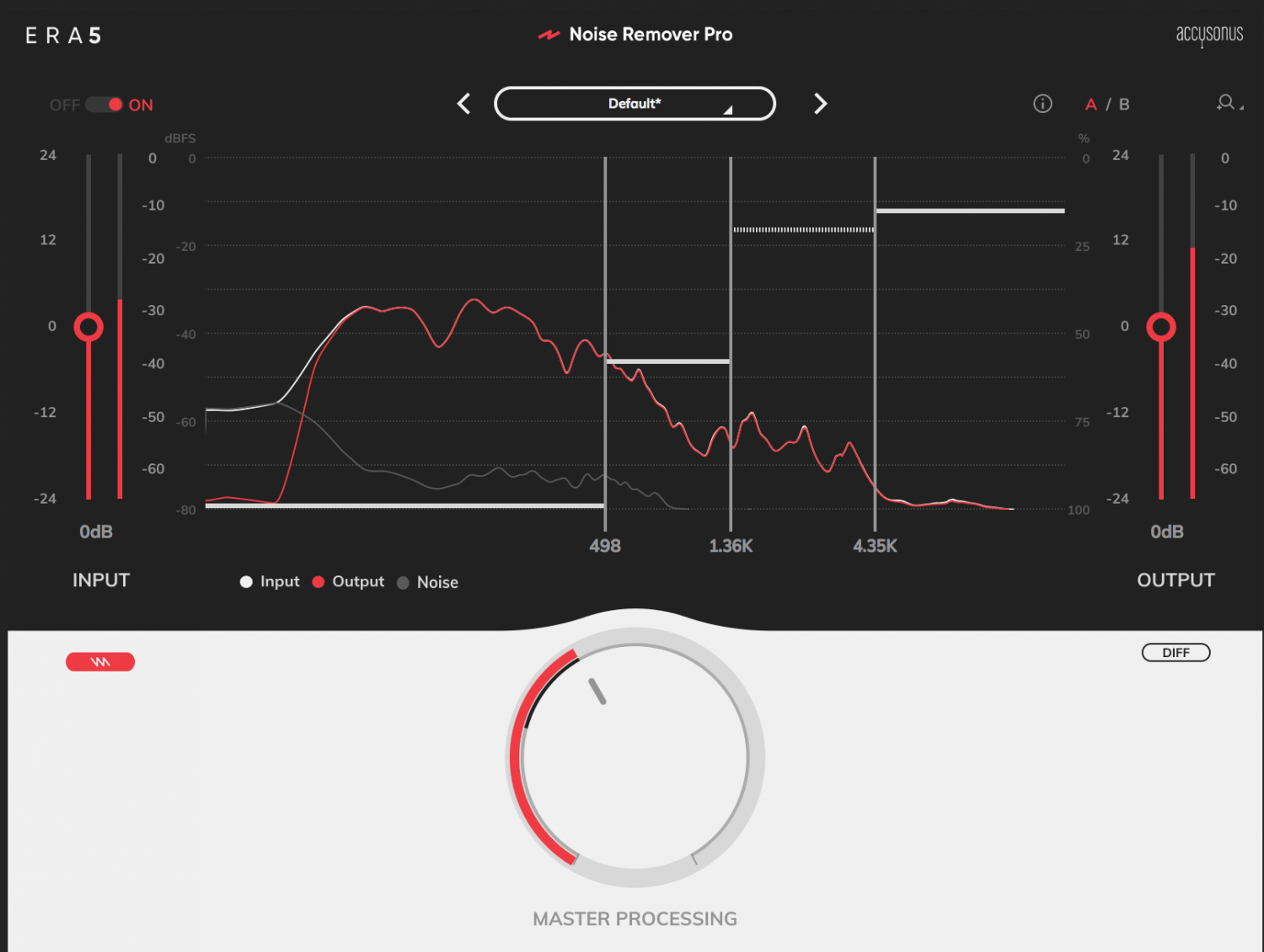 When Adobe Photoshop was introduced, millions of amateur photographers realized that they didn’t need to use proper photographic protocols to create a great photo, they only needed to take a reasonably bad photo and fix it in Adobe’s wonder program. Now, most photographers have no idea about film grain, proper exposure, contrast and shutter speed. Doesn’t matter. Photoshop will do it all for you. The same become true of recording audio. It doesn’t matter if you have a good microphone, placement or quiet room, there are programs now that will fix just about every kind of bad audio issue there is. The most notable issue is general and persistent noise. Whether it’s a refrigerator, generator, fans or din from next door, there are are apps for that. Accusonus in its last version of audio fix plugins, the ERA 4, released an incredibly effective and easy to use plugin called “Noise Remover.” We reviewed it and our favorite, ERA-D here. Now with the release of their newest bundle, ERA 5, they’ve released an ERA-D-style version of Noise Remover called Noise Remover Pro. Let’s give it a spin and see how it compares with its former bigger brother.

Noise removal takes two roads to success: algorithmic and learned. I’ll not be speaking about active drawing on a histogram – which is another way to deal with noise. We go into depth on all three of these in the Cinema Sound Education in the “Fix” volume.

The learned denoising variety is the most effective, since you “teach” the plugin what the noise is you wish to remove. After doing this, the plugin removes everything which matches the “learned audio’s” profile, and voila, the audio file is happily cleaned. And while this method is the most effective, it isn’t always the most practical. Why? Well, for starters, you need several seconds of uninterrupted noise-only sound. Many times this isn’t possible. Also, many times the noise is so similar to the sound of the clean audio that artifacts are the result. They usually sound like “chirping” or other weird unnatural noises.

With the advent of machine learning, algorithmic plugins are becoming every bit as effective as learned algorithms. With millions of recordings analyzed, these plugins have a near-human like intelligence about what is noise and what isn’t. They quickly and effectively strip out constant noise of all types with ease.

The Accusonus Noise Remover from the ERA 4 bundle did a good job at basic noise removal. The multi-band ERA-D plugin did an incredible job at it. Not only did it seem like it had a better and “smarter” algorithm, but it also had 4 frequency bands to hone down the denoising effect, reduce artifacts and get better noise handling. Even better, it had a “dechirp” filter which took care of really nasty artifacts from extreme denoising. Oh, and it also had remove reverb present on every band as well. Super nice.

With the ERA 5 bundle, Accusonus has added that 4-band capability to the Noise Remover plugin in the form of a “pro” version. And while there’s no dechirp or remove reverb functionality, this pro version is a massive upgrade from any dedicated denoise only plugin Accusonus has created in the past.

First, the ability to have separate bands of denoising plugin power should not be underestimated. Most of the issues which normal full bandwidth plugins have are centered around their constant need to denoise everything – even when the noise might only be in a certain frequency band. In fact, most noise takes place in the higher frequencies. But if you had a full bandwidth denoise plugin, it would possibly create issues in lower frequencies. It’s also an issue if rumble is the noise to be removed. And although a “learn” denoiser has no issues with this due to its ability to be told what the noise to be removed is, most algorithmic full bandwidth plugins can cause unwanted issues in otherwise clean frequencies.

Second, Noise Remover Pro allows for a selection of “type” of noise – either “noisy” or musical. For example: if there were a “whine” from a generator or overhead light present, using the tonal element selector allows Noise Remover Pro to focus on those elements more than just random hiss/noise elements.

Third, Accusonus plugins are known for their ease of use. Many times, the main function of a plugin is a single giant knob. The more you turn that knob up, the more the the effect of the plugin. In this case, the knob is still there, but it can be applied corporately or separately to the 4 frequency bands. Moreover, you can select to have 1-4 bands, link them, listen to them/audition them, and hear what the noise reduction sounds like. These are features that denoising plugins double the price offer – and most others do not. I find the ability to listen to what is actually being removed to be helpful, because it informs me as to how much of the dialog is being truncated along with the noise. From here I can adjust settings to maximize noise removal vs. voice removal.

Fourth, Accusonus saw fit to include a host of standard functions for the most typical of noise scenarios via presets. These can be a great place to start when attacking badly recorded audio.

As with any restoration plugin, there’s no real solution for badly recorded audio – only bandaids. And those fixes become more and more exposed in a mix the more effects and alteration of the sound occurs. But, hey, I’ll take an effected and denoised audio file over a noisy one any day. And if you’re looking for an easy to use, rare multi-band denoise solution, the ERA 5 Noise Remover Pro is a wonderful solution.

Review: Direct Sound’s EX29 Plus – Dance to the Silence