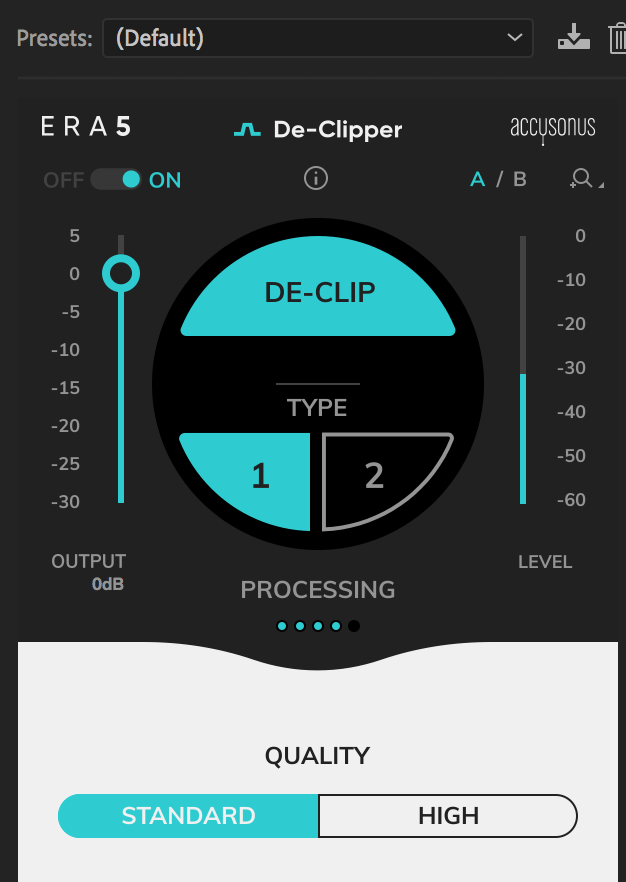 Not too many years ago (like 8), if you clipped your recording by going over zero dB, it was ruined. There was nothing you could do. You blew it. Everyone knew it. And it was Take 2. But with the advent of algorithmic and machine learning software plugins, even the most potent clipping can be turned into near-pleasurable sound. Almost. In other articles we’ve reviewed the ERA 4 plugins…which we love. This article is a review of the Accusonus new ERA 5 De-Clipper. Let’s see how it stacks up against the foul beast of distortion.

What is Clipping or Distortion? It’s basically what happens when all bits of an audio signal return the number 1. There’s just no more bits left to record anything. The input level is overloading the digital converter. Perhaps the plugin used is overloading the next leg in the digital signal chain. Whatever the way it got there, loud audio signals are being cut off from a digital wall: 0 dB. There’s nothing which can be recorded louder than 0 dB. Why? Because 0 dB is the loudest that digital audio can be.

Back in the analog days we could drive our recording inputs up to +15 dB in some cases and get a really great crunchy and snappy sound for our drums or other instrument. It was actually a “cool vibe.”

But that was analog. It’s why we call them “the good old days.”

Digital distortion is slightly better than getting your toenails ripped off. We want to avoid it at all costs. The trouble is, sometimes we can’t:

Maybe the actor suddenly starts yelling where she was whispering before: Over. Maybe the EQ with the big low frequency shelf gets a giant electric bass low note that is turned into a tsunami of energy: Over. Or perhaps all 768 tracks of the ProTools HDX 3 system, summed together, is about +15 dB: Over.

In a situation where audio is over 0 dB, fidelity of loud signals are lost forever never to return. Many people think that these “declipping” plugins now being used everywhere “bring back” the lost audio bits.

Nothing can be further from the truth.

At best, a declipping plugin can replicate and even simulate the sound of what was lost, but it will never be the original. Unprocessed, a declipped signal can pass as the real thing, but the minute you put it under a compressor, EQ, effect, you’ll hear the graininess.

That said, some of these declipping plugins are really good. Missing in several digital audio workstations is a good declipper. Fortunately, companies like Accusonus are giving us powerful solutions for distortion of all kinds.

In Accusonus’ newest release in the form of the ERA 5 bundle (filled with all manner of plugins which are reviewed here on the Cinema Sound site), is it’s esteemed “De-Clipper” plugin.

On the surface, it appears to be quite straight-forward to use (and it is). Like most Accusonus products, there are few controls. The power of the plugin is “under the hood” deep in thousands of lines of code. Most Accusonus plugins have a “keep it simple to gain the best results” model. Although we tend to feel like plugins should have the motto: “any good professional plugin should have enough power and control to truly destroy the sound of a pristine recording.”

That said, the Accusons products don’t disappoint. We tested the De-Clipper in the latest version of Adobe Audition.

As always, the ease of use of the plugin was apparent. It started working on our fried-eggs audio immediately. Although we discovered quickly that our 2013 i7 quad Macbook Pro couldn’t play back a single track of audio processed by De-Clipper in real time. Worse, “prerender” is sufficiently slow that it became too cumbersome to use…and this was in “standard” mode.

The standard mode did a great job of returning our lost data and creating excellent clarity – almost as if it had never been distorted.

Mode 2, it seems to me, is a more sensitive and careful distortion sleuth. It detects more “repeated samples” and does a better job of dealing with them. Similarly, the “high” processing setting can create great results from the worst distortion – but the processing power required to do so is going to require 24 processing cores at minimum.

As with any declipping plugin, audio artifacts will occur if the settings are high enough and the distortion bad enough. Unlike denoising/dereverb plugins I don’t recommend using multiple passes of declipping in order to get better results. If it doesn’t work on the first pass, it isn’t going to work on the 7th pass either.

DeClipper is super easy to use, and it works in all AU/VST environments. Of course, you can go out and spend $1,100+ on iZotope RX’s newest iteration. But for declipping, Accusonus’ De-Clipper is hot on RX’s heels for capability and the effective elimination of distortion.

We’re not fans of the pricing structure – which is a monthly subscription. But for the money, the value of the middle and larger packages are substantial. I’d also suggest you find a way to get your hands on the ERA4 ERA-D module which has some significant advantages over just about anything in the ERA5 bundle.