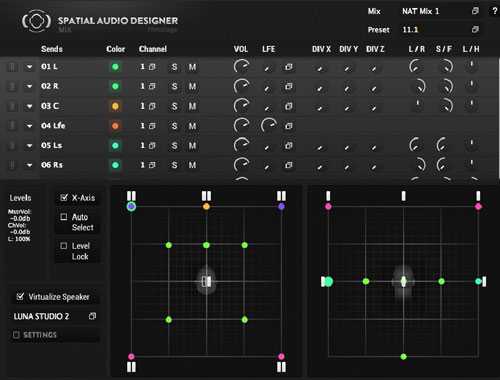 Just imagine if you could get full surround sound into any pair of headphones – and deliver it from Youtube? Well, it’s a reality, and for a very reasonable price, you can have incredible immersive audio on any of your productions anywhere using Spatial Audio Designer.

I’ve actually known about Spatial Audio Designer for several years – ever since we introduced it on the Sound Advice Tour. For 33 cities we

played a demo which had the music from Iron Man coming out of the left-mid-height speaker array in a 22.2 virtual surround system. It never failed (as long as folks weren’t using noise cancelling headphones) to have people look up and try to see “where the sound was coming from” or take their headphones off to confirm that we weren’t playing audio from some ceiling source. I use SAD all the time, and we certainly use it strongly in the Mix Volume of the MZed Pro Member education in order to demonstrate surround mixing in a two-channel environment.

We caught up with Tom Ammerman, the designer of SAD at NAB 2017, and we had him give us a demo of the plugin, which works in VST, VST3 and AU. I’ve personally used it flawlessly in Pro Tools, Adobe Audition and Logic Pro. Tom gives us a quick demonstration of the voodoo behind SAD in 5.1 and 11.1 (7.1 + quad height). DO watch this clip with headphones on. If you listen with conventional speakers, it’ll sound lousy. See if you aren’t amazed by it.

SAD also has the capability of taking complex 3D audio mixes (11.1 and up) and down converting them to stereo – which is a feat that no DAW plugin can do. There are several varieties of Spatial Audio Designer which can be purchased directly from New Audio Technology, but the one a filmmaker would want starts at around $400 and goes up to $1,000 for full 3D surround.