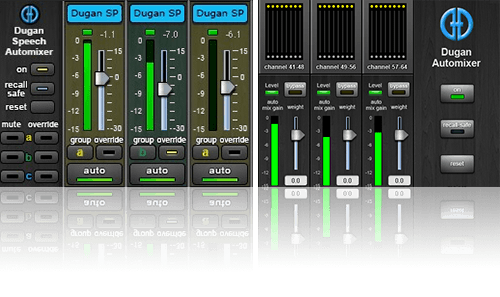 The DAM changes how we mix multi-mic dialog forever.

Here on Cinema Sound we say to record dialog with as many microphones as possible, but only use one in the mix. All of that has changed with the introduction of the Dugan AutoMixer from Waves.

The big issue, as we discuss in the MZed Pro Member Education, is the issue of phase cancellation whenever two microphones are used to

record the same subject. They may sound fine individually, but when you sum them together – especially in mono – you hear that weird sweeping or whooshing noise which creates a “metallic” feel. This is caused by micro delays between the voice’s direct sound hitting the microphones at different times. Two or more delayed sounds create phasing issues when the delays are in the single millisecond range, and using multiple microphones is suicide.

That is, until the Dugan AutoMixer came along. It uses a 70s-era mathematical model to create a 21st century solution for anyone who wants to use the never-to-be-done horror of mixing with multiple microphones on the same source. This comes is especially handy when having to record multiple people at the same time with multiple microphones. The usual requirement is a massive amount of editing microphones from person to person and managing complex crossfades and mixing. The DAM does all of this automatically.

To be fair, it’s not the most inexpensive piece of equipment you’ll own especially since it requires a pretty powerful DAW and Digi-Grid from waves, but if you find yourself doing a lot of this kind of thing, you’ll save far more than your investment in time and effort.

Besides, it’s so cool. Check out this demonstration I was given on the floor of NAB at the Waves booth. The Dugan AutoMixer is $599 from Waves directly.
#cinemasound #newsshooter

You can find out more about the incredible audio voodoo which is working under the hood by looking up the AutoMixer’s inventor, Mr. Dan Dugan.

All 13+ Hours of Fix Volume Now Available for Discount Purchase!