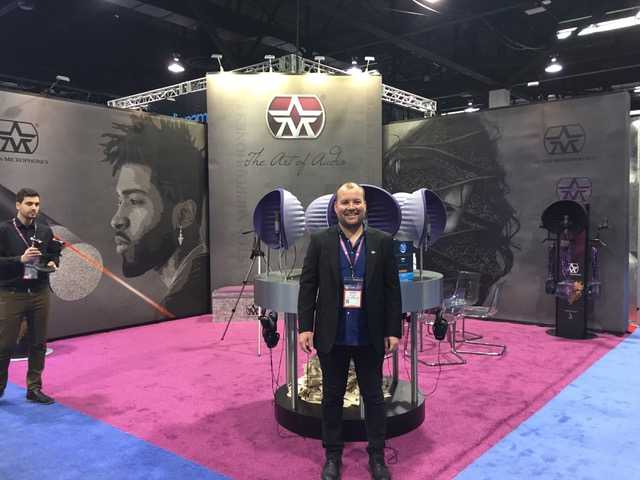 James at one of the many Conventions he attends for Aston.

We were able to catch up with James Biddle the CEO of Aston Microphones USA – the exclusive US distributor of the amazing Aston HALO which we reviewed here at Cinema Sound. In this brief interview we learn about James, where he came from and some tips for independent media creatives.

Cinema Sound: You’ve got quite a diverse background. How did you get started? What was your motivation for making microphones and support systems?

James Biddle: I’ve always loved music, but I am a terrible musician. But I always knew I wanted to work within the industry. Since I was young I have had a real passion for all things audio. But to keep my parents happy, I started out studying law at nights and working in legal firms as a law clerk and paralegal. After 3 years I didn’t like what I saw at the end of the tunnel.

CS: The freight train of destiny.

JB: Exactly. So I quit my job, dropped out of uni[versity], and enrolled in a Business Degree that revolved around music. 2 years into that I secured a role with an Australian microphone manufacturer, who I stayed with for 7 years which was divided up as 4 years in Australia, 3 years in the US. During this time I learned a lot, and met a lot of great people in the industry. I finished up with them in 2014. In late 2015, I got an opportunity to do my own thing with Aston – I couldn’t be more proud of what we have achieved in such a short space of time.

CS: Aston is always innovating some great new ways to get sound into voltage. But, there’s 14 million companies making audio products, why did you want to jump into that fray?

JB: Well, until you asked that question, I thought there were only a few of us doing it and it was a niche industry, so I guess being completely naive! [laughs]

CS: We doubt that sincerely. Seriously, if you go to the NAMM show, you’ll see dozens of microphone manufacturers of all sizes vying for marketshare in the music and multimedia space. What gives Aston the edge?

JB: Aston has reinvented the microphone as the world knows it, by using inexpensive (but incredible) exterior components that have never been traditionally used in microphone manufacturing. This ingenuity allows Aston to manufacture microphones in the UK at a price that is comparable with microphones that are manufactured in China – but at a quality level that is significantly higher.

CS: What’s the main issue you find independent media creatives run into or would like to see solved?

JB: Seamless gear compatibility – there always seems to be one adapter too many.

CS: We have drawers of too many. Well said. If there was one thing you wish media creatives understood, what would it be?

JB: Audio is as important as video!

CS: How big of a role do you believe sound/recording education should play in the careers or investment of independent media creatives?

JB: I think sound education should play a significant role, as it such a critical component of their day to day, but because it is invisible, it is easy to overlook.

CS: With the Halo, you’ve remade the concept of the Porta-recording-booth. What were the biggest things you wanted to see change  in this kind of system?

JB: Great question. It comes down to these things:

1. Weight – predecessor models were too heavy, and would easily tip over mic stands

2. Function – it doesn’t take Sherlock Holmes to figure out that you need a top and bottom -in addition to two sides and a back – to stop reflections! The floor and the ceiling are often the most reflective surfaces in any room – studio or not. The Halo solves this issue.

3. Statement – the Halo looks incredible. The vast majority of our competitors in this space clearly didn’t consider aesthetics in their design. We’re huge believers in things being incredible in both function and design. It’s eye catching. People love checking it out, and talking about it.

CS: One of our favorite axioms comes from the aerospace world: if the plane looks good, it’ll fly good. You’ve totally made that axiom right with the Halo. Are you coming out with any more cool colors?

CS: Ah. Giving away nothing. Nice. Anything you’d like our Cinema Sound members to know?

JB: We’re eco friendly! The Halo is actually made from 70% recycled PET plastic, stripped thinner than a hair, and repurposed into the beautiful, lightweight and efficient product that is by far the most effective on the market.

CS: Thanks so much for stopping in, James. We’re looking forward to the next amazing thing from Aston!