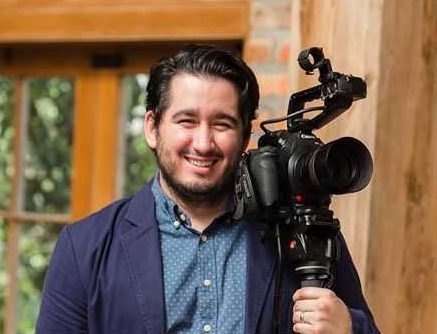 At Cinema Sound we have over 1,000 members and many of them are quite active in their careers as independent media creators and on the blog and facebook pages. Cinema Sound Member Jordan Beard is one of the most active, and he’s contributed to no small amount of the Cinema Sound world as we’ve developed. You should also know he’s the admin for the secret Cinema Sound Facebook page. We’re excited to have him for an interview! Jordan, thanks for having us.

Jordan Beard: I’m excited! Where do we start?

CS: Well, you’ve been a member of Cinema Sound for some time. Tell us what you do.

JB: I am basically a one man band video company called Harmonic Films https://www.facebook.com/HarmonicFilms (still working on fixing up the website after I had nuked it a while back)  based out of Denham Springs which is close to Baton Rouge, the capital of Louisiana, and by one man band, I mean that I have to line up the clients, do pre-production, film everything, then do ALL the post production work that’s involved in the project.

CS: It’s a lot of work to have to do everything yourself.

JB: It can certainly get challenging wearing all the hats. While weddings are still my main source of income for me and my family, I’ve been slowly moving towards more commercial/corporate projects that have landed in my lap, and I have been loving it! I’ll occasionally film a band promo or music video for a band, or do a local business promo along with being the subcontractor for a local church to do their Sunday announcements. On top of this being a busy wedding season, I’m in the middle of doing all the post-production for a second short film that I was also the DP.

CS: That’s super exciting! How did you land your post-production gig?

JB: The second short film I’ve ever done was the same director that I did my FIRST short film with. I’m doing this 2nd short film as a favor for him since he was great to work with and this was a great opportunity to gain some more experience being Cam Op, DP, Sound Editor/Design, Editor, and Colorist

CS: What’s the most important aspect of Cinema Sound for you?

JB: Mark’s in depth look into editing/fixing/mixing sound can definitely be overwhelming at first, but I know that this is something that you won’t find on a youtube search, and if you do, you have no clue who Joe Blow is. While I am a big believer in “the proof is in the pudding”, knowing that Mark at Cinema Sound has dealt with wide ranging audio production from lower budget to higher budget productions makes me feel confident that he knows what he’s talking about.

CS: Can you describe one or more examples of how you’ve been able to directly apply the Cinema Sound education to your productions for the better?

JB: It seems like he’s constantly putting out new tutorials each day to use! Since I’m mostly weddings where footage and audio captured is VERY uncontrolled and raw, the biggest one (two) I’ve used has been Noise Reduction and Sound Remover. Since I mic up my groom and the officiant in weddings with lav mics, I’ve been able to remove the “click click” of a Photographer’s camera taking pictures when she was RIGHT NEXT TO THE GROOM TAKING PICTURES. While this is not the norm, and it was super annoying to have to fix, I had to do it because it was during the vows and this video was going online for people to see! It just bothered so much to have it in there and I was fortunate enough to be able to take it out without degrading the integrity of the actual voice from the groom’s vows.

CS: What kind of gear do you use?

JB: Let’s start with my DAW. I use Audition. For my NLE, I use Premiere Pro. I hope to grab some JBL studio monitors when I get my home office setup but I’m not there yet. [this has since been done!]

CS: Which ones and why JBL?

JB: The ones I have been keeping an eyo on has been the JBL LSR 305 MkII because of a review Mark did for Cinema Sound https://www.cinemasound.com/jbl-lsr-305-mk-ii-review/  The price is very reasonable and his review was pretty convincing!

CS: Why did you go with Audition instead of another DAW?

JB: With Adobe since I am a one man band, I use their products for several different reasons. The main program I operate out of is Premiere Pro. Occasionally I’ll have to open up After Effects for some graphics (although I love how much more they’re integrating motion graphics into Premiere Pro) and for major audio issues I’ll use Adobe Audition to clean up or fix audio problems. I mostly like how Adobe products are seamlessly integrated with each other!

JB: Hard Rock! It’s as easy as right clicking in Premiere and telling it to open it in Audition or After Effects. The fact that they are created to flow within each other makes it the main reason I haven’t tried other competitor products. I just haven’t experienced problems trying to import one thing into another…it just works! Adobe hits the mark with their programs being perfect for prosumers, but also powerful enough for professionals to use as well.

CS: We’ll also mention Media Encoder as the best way we’ve found to export finals where using the maximum processing power of your multi-threading capable computer is desired. Give us an example of how Adobe saved you on a gig.

JB: One time, I plugged my lav mic into the headphone port of my H1 Zoom for a wedding. This lav mic was attached to the groom and the H1 was in his pocket and this was supposed to being capturing their vows.

CS: That post/panic entry is still on the Facebook Group. We got nervous for you!

JB: Talk about a sick to the stomach feeling once we took the mics off of the groom! Fortunately the groom was trained in the military and was VERY still during their vows and Adobe Premiere Pro was able to boost and clean up the audio that was picking up their voices from his pocket! I only needed to clean up the vows fortunately, so I got what I needed!
Another time, a “first look” for a bride and groom was going to be done outside under a deck but in Louisiana heat (think hot and VERY muggy) and the venue had on HIGH powered fans to keep things cool. While we do mic up the groom to capture any sweet things that he says during their first look, I knew that with those fans it was going to be pretty loud. I was able to take out a LOT fan noise to make their conversation a lot more distinct and not as distracting. I think I did this just in Premiere Pro too since I hadn’t done anything with Audition at that point.

JB: You know, I’ve always had trouble looking down the road and figuring out where I’d be. 5-6 years ago I was a Band Director and just started doing video work on the side and now video is my full time job!

CS: Can you give us the run down on how that transition happened?

JB: I originally had a friend who worked for a company that was filming wedding videos, and he would show me things every now and then. When I think back about it, I didn’t know the difference between 720p and 1080p and which one was the better one!

CS: Depending on what year we’re talking about, most videographers didn’t either! [laughs]

JB: That friend was getting a Canon 5d mk2 and wanted to sell his Canon 7d to me and I bought it as an investment to hopefully learn so I could make some extra money on the side by being his 2nd videographer with him on weddings. I had a friend from college (who was guitar music major) and he brought up the idea of starting our own company, and at the time we both had part time jobs. I was a part time Band Director to a new music program, and he was a part time Worship Leader at a church, and he did their video announcements. We started the company and settled on “Harmonic Films” as a tribute to our musical education! After about 4-ish years, he left to work for another company, and I bought him out to become the sole owner/operator of the business.

CS: That’s an incredible story of perseverance! What’s next?

JB: I’d like to be out of the wedding business completely (It’s a super important job! I’ve just been doing it for a while) and doing more commercial/corporate work that will sustain me and my family. Whether that means as an editor, a camera operator, sound guy, key grip, or any of the multifaceted aspects of the job we call “video” work, I truly enjoy doing it all and being a multitool/jack of all trades sorta guy.

CS: If you had to give one piece of advice to the membership of Cinema Sound – who are doing their best to create powerfully immersive content for their audience – what would it be?

JB: As a former educator, I’d say keep on learning and asking questions! It’s how you learn and how you grow! And another important piece is, as you learn share with those who don’t know! Don’t forget that at one point you yourself didn’t know how to do something and you had to ask someone for help.

CS: Thank you so much joining us for this interview. We’re looking forward to hanging with you in the Cinema Sound-verse and hearing more about your successes!