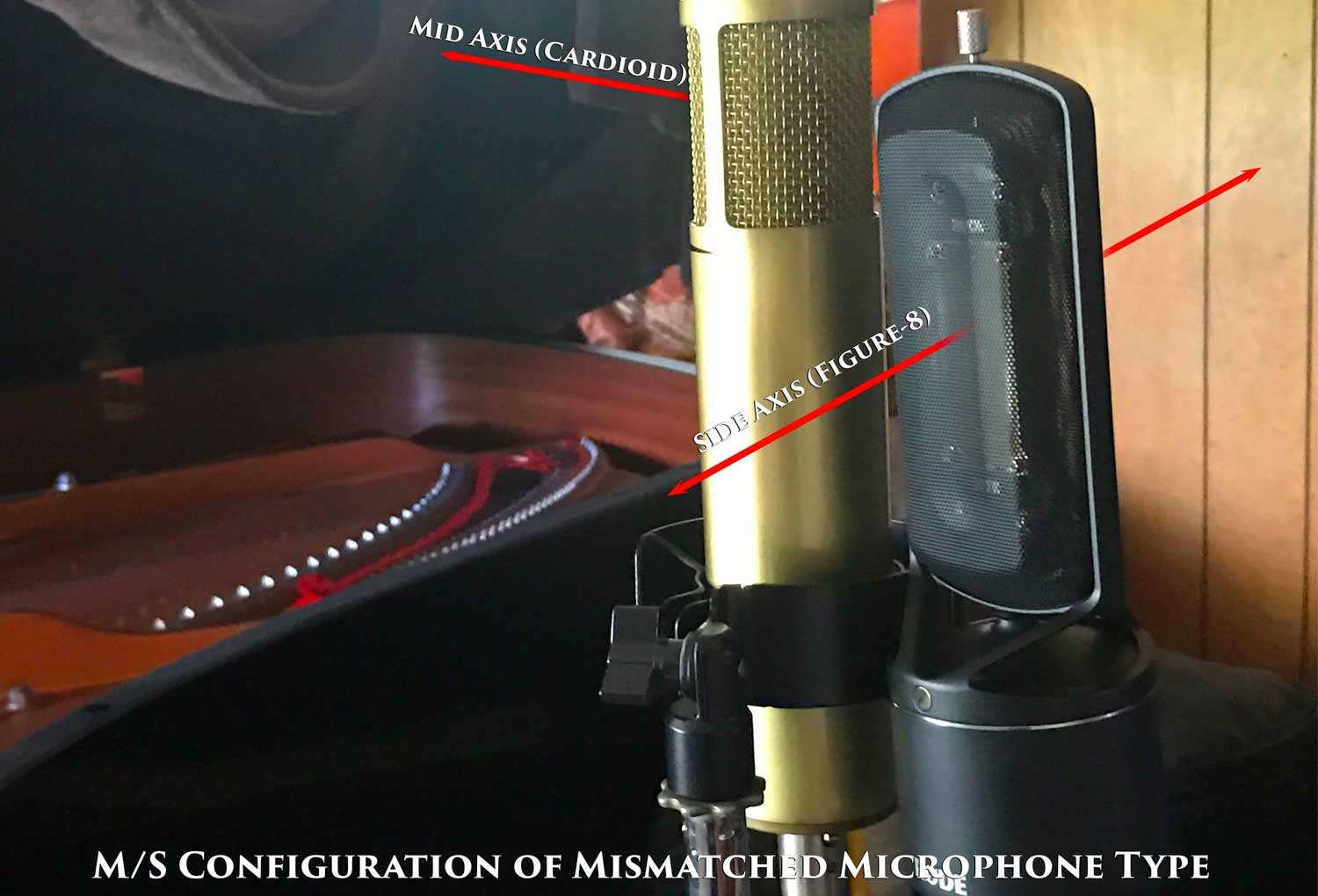 The 747 and NT-R are VERY close together but out of phase.

Although recording on set is typically monophonic in nature, there are times when we must record in stereo as in the case of ambiences, sound effects and music. But sometimes we don’t have compatible, X/Y or stereo microphones on hand. In this article I’ll show you my experience with getting great stereo recordings with a Cardioid & Figure 8 mic.

1. You’re on set at a location where there’s an ambience that is super dope, but you don’t

have a stereo mic handy. All you have is a cardioid mic (condenser) and a mic that has a figure-8 pattern (like a Røde NT-2A, or NT-R).

2. You’re at a place where there’s live music being played and, again, you don’t have a good stereo mic, a matched pair of mono mics or even mics from the same manufacturer, but you do have a mic with a figure-8 polar pattern and a lav or cardioid microphone.

What I’m about to demonstrate for you is the wonder of Mid-Side recording. Tweet: I find M/S recording superior in just about every way to stereo microphone recording. @cinemasound_ Naturally things are made very easy if you have an M/S mic, but most of us don’t. Worse yet, most don’t know what to do with a mid-side recording once you have one. It’s certainly more involved than just panning the two channels you get hard right and left. Once you understand this process, however, you can make incredible recordings with mismatched microphones and all kinds of things. The key lies in having a microphone that has a figure-8 polar pattern. 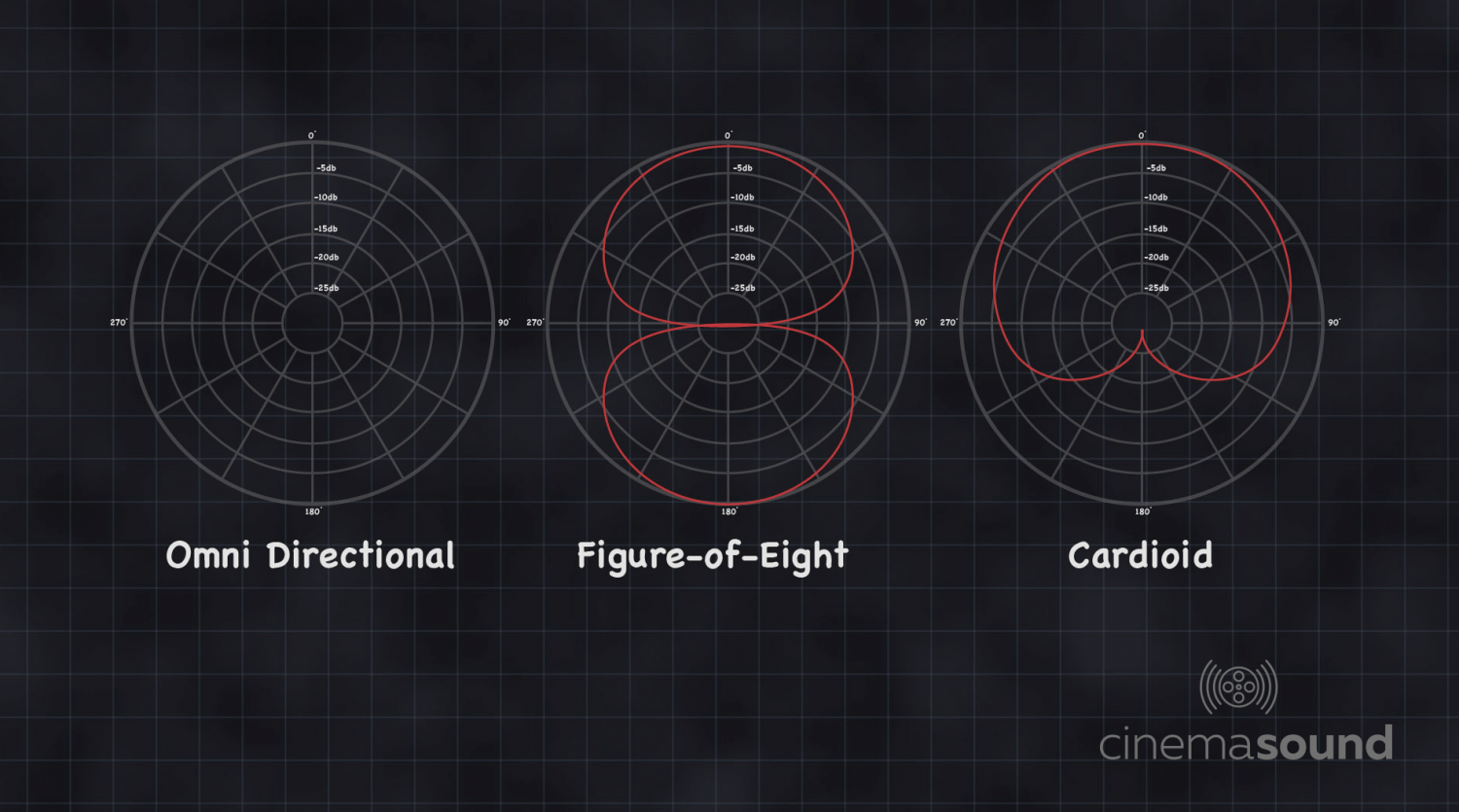 A few Polar Patterns used on set and in studio.The Figure-8
The figure-8 polar pattern is something akin to having two cardioid polar patterns on the front and on the back of a microphone. Ideally, this mic has exactly the same sound from the front axis as it does from the back. For production or post we almost never use the figure-8 polar pattern. For music, however, it’s a staple among polar patterns for recording groups, choirs, and all sorts of scenarios where recording front and back into a single channel is desirable while rejecting the sides. Many condenser mics have this setting as an option along with omnidirectional and various forms of cardioid. Ribbon microphones, because of the nature of the “diaphragm” (which is no diaphragm at all) can receive sound from both front and back and is the only kind of microphone where both front and back are above 95% identical.

For us in production land, though, the figure-8 microphone is essential when we want to record an M/S recording. Most of the time, a microphone which has the ability to be figure-8 is NOT something you want to have sitting on your audio cart or bouncing about in your audio back. Why? They’re usually highly sensitive and will never go on a boom pole. To say nothing of a ribbon mic which, with the right bump, will destroy itself completely.

The Magic of M/S
What is Mid-Side recording? Simply, it is taking a single cardioid pattern microphone which is pointed at the subject, and a figure-8 pattern microphone positioned directly behind the cardioid and rotated 90º (so it is sensitive to the sides instead of the front), recording both channels separately, then processing them in post. As to the processing part, I’ll cover that in another article, and it’s covered in depth in the Pro Member Education.

As a results of the placement of the microphones, they are out of phase with each other. Normally, two microphones out of phase is a really bad thing especially if you’re summing them together in the mix.

The Rule Is: record a subject with as many microphones as you like, but only use one at a time in the mix.

But with M/S recording, having the two microphones out of phase is essential for the process. WUT!?  I know. Crazy. Rules are meant to be broken now and again, right? By placing the cardioid mic to capture the front sound and the figure-8 mic to capture the side sounds, you have a much wider field of sound to capture than with simple dual 90º mics at 45º (standard X/Y stereo).

I’ve made a set of examples recording my Yamaha C7 piano while I perform the Chopin Ab Polonaise. Please forgive the mistakes in the performance. Pianos are notoriously difficult to record, because there are literally several hundred sound sources which must be captured simultaneously (the strings) in addition to the sound being bounced off an open lid. The worst audio situation to have to deal with. But since the human brain doesn’t have much of a problem listening to a piano when it stands in front of one, why would some microphones? Well, the answers for that are found in the Record Volume of the Pro Member Education. It’ll suffice to say that if you can get a microphone situation that records a piano in a room where it doesn’t sound muffled or tinny and retain the dynamics of the instrument as well as get a wide stereo field, you’ve got something which will work extremely well for ambiences, music in general and stereo sound effects. I’m pretty happy with how this works.

The Set Up
I wouldn’t normally do this set up this way. But for example’s sake, and to demonstrate how good this system works, I’m using a very rare DVA (Royer Labs) 747 Tube Mic in the Cardioid polar pattern setting (it also can do omni, figure-8 and mixtures in between), and the Røde NT-R (a ribbon mic  thus always figure-8). Tweet: Ideally you want at least the same manufacturer of microphones to be in your M/S setup @cinemasound_ if not actually the same kind of microphone. I’ve mounted them on separate stands very close to each other with the NT-R behind the 747.

A Brief Treatise on Sample Rates

You’ll notice three of the four tracks are posted at 48K, and the last at the original 192K which is the sample rate at which I recorded all tracks. I’m sure SoundCloud highly compresses things, I’m also sure you’re not getting the 192K fidelity, but I thought it appropriate to have it up there for the audiophiles among us. I ran both mics without any special preamps into my Zoom F8 set to 24 bits/192kHz. They were brought into a 192kHz session in Logic Pro where they were processed as described in the article on M/S processing, and exported at 48kHz (except for the last).

Some folks scoff at recording with high sample rates. “You can’t hear the difference.” And indeed, in many cases you can’t. I challenge anyone to notice a difference between a 96kHz recording and a 192kHz recording where both are 24 bit. But the proof is in the plugins. If you do so much as a fader and pan change, the evidence becomes crystal clear. And since this recording requires both panning and phase inversion + summing, even though we’re downconverting to 48kHz, keeping things in 192kHz (or as high as you can) is critical. Much like recording in HD to downconvert to DV. You’d never argue with someone about having no value or wasted bandwidth shooting in HD when the final was going to be in SD, right? If you’re doing all your processing at 1080p, that’s the ONLY way you should do that: keep everything at the highest bandwidth possible…with the last process being the downconvertion. It’s exactly the same with audio. If there were a way to process Sony’s 2.8mHz recording process I’d be using that…then downconverting to 48kHz.

We have one track which is the mono Cardioid DVA 747.

Another which is the mono Røde NT-R

Another which is the correct M/S mixture of them both

Notice the incredible difference between the mono mics (whereas both mics do a very good job of representing the sound of the piano) and the resulting M/S composite. It’s much wider and more beautiful than a standard X/Y mic would be (especially if you know anything about the brassy and bright nature of a Yamaha piano), and it’s wonderfully mono compatible. Feel free to download the mono tracks and experiment with them yourself. Panning both just left and right seeing what you get (not so great) and then doing your own M/S composite.

Although you can turn down the volume of the Mid (747) mic to create an even wider stereo field, the more one does that, the less mono compatible the sound is and the darker the sound gets (because essentially the NT-R is being physically blocked by the 747). Our audio engineer from the Sound Advice Tour Andres Acosta experimented with this with some Oktava microphones and had similar results on his upright piano.

Again, when you listen, please forgive my mistakes.

Even though this is a musical example, this works wonderfully with ambiences, sound effects and any situation where you need to have a super wide stereo recording of an already wide sound source.

Shootout with Sony A6300, Saramonic Vmic & Vmic Pro for Dialog