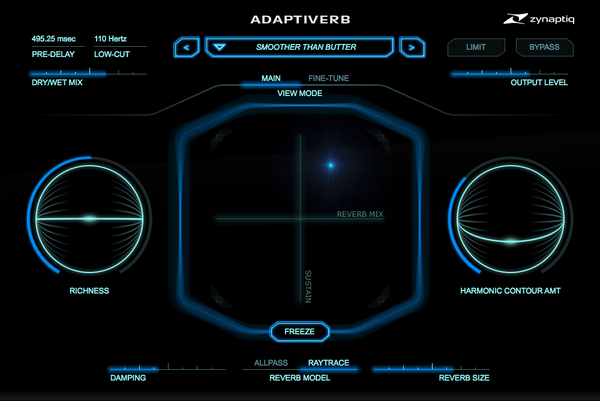 Zynpatiq's Adaptiverb: a perfect plugin for effects and a great verb in general.

There are several types of plugins which are cornerstone to getting great cinematic mixes. In the top three are EQ, Compression, Limiting and denoising. But none of these will get you anywhere unless you have a reverb plugin…or two…or three…and know how to use them. In this article I’ll explain what reverb is and isn’t and how to use it to get your $50,000,000 impact on your audience.

What’s in a Name?

I hear a lot of folks interchanging the words “Echo” and “Reverb.” Let’s make sure we get this handled first. Echo defines what happens when

perceivable singular reflections are send back to a listener. What the heck does that mean? It’s what happens when you yell into a canyon and hear what you yelled repeated. “HELLO?… Hello?… hello…” That kind of thing. As long as you can hear a discernable repeat, it’s echo. Whether it’s a single repeat or multiple, that’s the definition. Reverb (not to be confused with my first feature film), is hundreds if not thousands of echos all mashed together so tightly in time that it appears to sound like a cohesive whole. What the heck does that mean? It’s the sound you get in a large interior concert space and yell, “Hello?” You don’t hear repeats, you just hear a wash of “room reverb.” Your voice is reflected thousands of times over the surfaces of that room and sent back to you within a few microseconds of each other. It’s pretty awesome when you think about it.

There’s another consideration to not get confused: Early Reflections (E/R). These are the very first echoes which come back from the surfaces of the environment you’ve yelled “Hello?” into. They’re really just closely spaced echoes and are sometimes considered reverb because they are close together in time. We distinguish them from both Echo and Reverb because of where they occur in time. If you’re in a chapel where there’s a giant reflective mirror or window in front of you when you yell your greeting, you’ll get the first reflection from the window/surface first and anything else which is close to you. It might even sound like echoes. Closely thereafter, though, it’ll be actual echoes and reverb. To give the illusion of being physically “near” something, Early Reflections need to be present.

In this article we discuss at length the difference between Algorithmic Reverb plugins and Convolution Reverb Plugins. For those of you editors who are never going to open a Digital Audio Workstation app, you should know these fun facts about which to choose:

Ideally you want to have both in your arsenal of computer plugins. There’s also stereo and surround reverbs which are both Algo- and Convo-.

What Reverb Does In A Mix

Although there’s a lot of technical jargon which a lot of folks talk about in regards to what a reverb plugin does in a mix, in my mind it does one thing: drops a sound deeper back in the Aural Cube. We talk a lot in the MZed Pro Member Education and I cover this in deep length in my book  and on the blog about the need for each sound in a mix to have a distinct spot in the Aural Cube, and reverb is the tool we use to push sounds backward- or deeper “behind” in a mix. Sounds which are drier appear more forward while sounds which are “wetter” or more reverberous appear to the rear.

Naturally, reverb allows us to do a bunch of practical things like recreate the sound of a room to better mix in ADR, or add warmth to a really piercing signal or use it to help with music edits – all covered, again, in articles here or in the MZPE. It’ll suffice to say that reverb adds an additional element to a mix/channel/sound which gives it the feeling of being “pushed back” in the Aural Cube.

The issues using reverb in a mix, first, are the limitations of your computer. If you’re using convolution reverbs, your computer and NLE will be doing overtime computing in order to play back your timeline. You’ll want to take special care if you’re also doing visual plugins in real-time to avoid “chunking of frames” or worse.

Second, you’ll find that some NLE’s (like FCPX) will actually cut the reverb off once the end of the clip is reached, even though you wanted it to continue naturally afterwards as reverb would. There’s not a whole lot which can be done in such a circumstance except attempt to “nest” the clips into a longer folder or sequence whereas you can lengthen its out point to accommodate the long reverb time. Boo.

Third, reverb, used without care, can cause a “mush” out of a perfectly good mix (especially in music mixes). It’s important that the Aural Cube location of sounds have the more important bits (like dialog) more dry and forward. If there’s dialog in a giant room on screen, then extra care needs to be taken with the dialog and other sounds in the mix in order to retain dialog’s “dry superiority” over other reverberous sounds – even though all sounds will have reverb in such a case.

Lastly, choosing the wrong kind of reverb isn’t the end of the world, but certainly trying to get an algorithmic reverb to sound “just like” an acoustic space seen on screen is a mistake. It will take so long to create a good facsimile of that room, that you could have saved money and time by just buying a convolution ‘verb. Similarly, it’s not a good idea to get a “perfect room” sound on a music application, when convolution reverbs, in my humble opinion, are ill-suited to enhance music mixes (with the exception of orchestral sample mixes). Choose the kind of reverb you need wisely and use this education to do it.

There are three possibilities for implementing the panoramic use of reverbs and some may surprise the uninitiated.

Reverb plugins, even algorithmic ones, take far more computer power than nearly any other kind of plugin. Instantiating two or three is no problem, but when you have a complicated mix with 9 or 10 stereo reverbs, and 3 or 4 surround reverbs, your computer may choke on playback. In this case, using bussing is important. What’s bussing? Well, it has nothing to do with travel to downtown. A bus is a silly name for something which carries a signal somewhere else. In this case, we place a resource intensive plugin (like a reverb) on a bus which many clips or tracks can use. For example: if we’re in a scene where dialog, foley and effects need to access the same convolution reverb representation of the giant sewer space our heroes are in. We put the reverb on a bus, and then assign a certain amount of the outputs from channels/clips to that bus, and voila! One reverb plugin is able to serve multiple clips and channels. We talk about how to route sounds to busses in DAWs in the MZPME, but NLEs we’ll be covering here on Cinema Sound blog posts. Stay tuned!

Recommended Reverbs and Why

This is by no means exhaustive, but I’m focusing on affordable reverbs which you can get the most value from in your NLEs and, of course, in your

DAWs. Full disclosure: most of these are from sponsors, but I’d never push on you something that wasn’t above a 100 CS rating even if it were a sponsor product.

Zynaptic Adaptiverb. Use this as an all-around great reverb and the best in this list for creating amazing sound effects and altered reality ambiences. M/S/5.1

Valhalla DSP Valhalla Room. Use this as an all-around great way to plug the hole of whatever simple algorithmic reverb needs you might have. I use this for all kinds of musical applications, and at $50… M/S

Adobe Studio Reverb. This is a great reverb if you have the computer resources handy and comes stock with Adobe products including Premiere and Audition. M/S

Waves TrueVerb. Although it’s the most processor hungry of this bunch, it has the most capacity to emulate a convolution reverb. It also creates some beautifully rich reverbs. M/S

East/West Quantum Leap Spaces. This is a super affordable, albeit buggy, Convo reverb you can get at Amazon. It’s got beautiful rooms meticulously recorded. It’s ideal for musical applications, but it can work anywhere that you need studio or hall spaces. M/S

Waves IR(L). This is the defacto standard for affordable Convo verbs. It comes with an impressive array of Impulse Responses already, but you can easily load in your own and garner perfect and impressive results. M/S/5.1

Adobe Convolution Reverb. This is a wonderful reverb which, although they’re still working the bugs out of loading your own IRs, sounds amazing.

There’s even a dedicated surround version which is one of the best sounding surround implementations of reverbs out there. Comes standard with Adobe products. M/S/5.1

Audio Ease Altiverb. This is the defacto standard for Convo-verbs, period. Yeah. It’s pricey. Yeah. It’ll kill off your computer resources, but it does the job. I actually rarely use it. I think it’s terrible for music, but in the world of getting things sounding perfectly like a particular room, you’re not going to do better than Altiverb. M/S/5.1

Hopefully this article has given you some new ideas for using your friendly neighborhood reverb plugins and perhaps even inspired you to get down and dirty with mixing in your timeline as a start toward getting your $50,000,000 impact on your audience.

Have your own experience with Reverb plugins? Let us know or Tweet about it!

Understanding the Foley and SFX of Blade of Honor