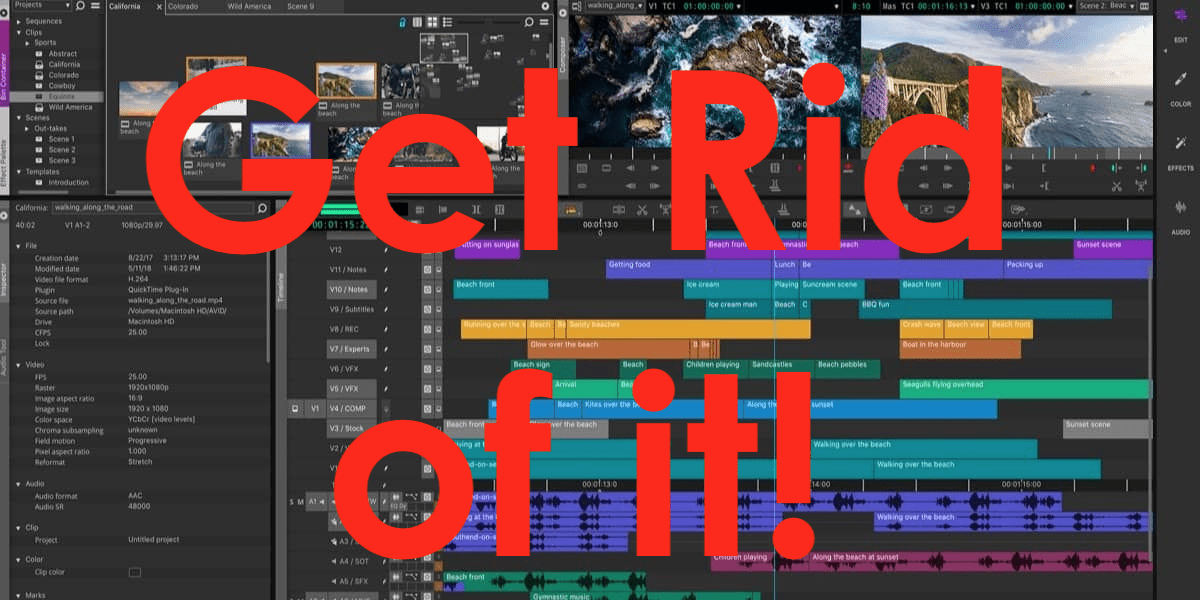 For years now we’ve been talking about which NLE or DAW is the “best one.” “This one has this” and “that one has that.” In the end, for the most part, each NLE/DAW has its own merits, and each seems to work well in a particular field or kind of media. I say, “for the most part” for a reason. Some simply don’t measure up to prime time delivery – or they make it so difficult to create a professional delivery that it isn’t feasible to use. Some of you already know which DAW/NLEs I’m talking about. Before I start naming names, (and I will) let’s talk about the mandatory features of any professional NLE/DAW and see if the ones we’re using have such features. Yours doesn’t have them? Get rid of it!

There are fundamental basics which need to be established in a DAW/NLE for anyone to consider using such a program for professional deliveries. Even if you’re just doing youtube single-phone shots, your NLE should have these basics or else you’re working too hard to get the results you need. I’m lumping DAWs in with NLEs because a great NLE should be able to function like a DAW in many respects, and most of the editing we do in audio-only DAW-land should function the same way in NLE-multimedia-land. We’ll be examining Adobe Premiere Pro, Final Cut Pro X, Avid Media Composer and Black Magic Resolve. If it doesn’t do these things, get rid of it.

Let me mention that all of these programs are stable. That means they should crash while being run at their best settings once a day or less. I know that may sound like a lot, but NLE/DAWs inherently push CPUs to their maximum. Even the most stable of the programs listed here crash once every other day or have to be restarted for some buggy issue. If your NLE/DAW requires a program restart more than this, get rid of it (or find out what’s wrong in your CPU).

To be fair, no program gets all of these right. And to just say “get rid of it” if it’s missing a couple of these is foolish if you’ve invested time and money in your NLE. Here’s the breakdown as I see it:

With Dynamic Linking to a host of professional applications, excellent customer support, and a large user base, although it’s nowhere near as cheap as FCPX or DR, if you’re doing any kind of multimedia work where you need to create professional results and have maximum flexibility in nearly all areas, Premiere should be your go to.

Resolve is growing by leaps and bounds. With the advent of Fairlight and Fusion, it’s become a platform where projects can originate and deliver all-in-one. And although the Fairlight page has a ways to go before it’s ready for prime time, it’s still an excellent platform to be working on your projects. It doesn’t hurt that the base version (which disallows a few critical aspects – like adding visual plugins at all) is free.

The former Hollywood de facto NLE has slipped in my estimation. Not because it’s gotten worse as a useful tool, but because it didn’t keep up with the competition. Add to this the requirement for expensive hardware to make it work as intended, and we find Avid losing market share every day.

Personally, I like using FCPX on small videos where I don’t need to deal with anything in audio, and need a motion graphic or two – maybe some simple color correction. More than this? No way. Have I done large format narrative editing on FCPX? Yes. And it took me, literally, 4 times as long to get the same prodct with PP or DR. Without any good way of getting audio out of the software in a manner that doesn’t cost a day in assistant editing, limited codec export, and a wonky way of editing, FCPX is definitely the least amongst these four in my book.

Of course you’ll have your own opinions (and rants), so please drop those here. I’m always open to new ideas and even new ways of accomplishing things – which might raise the score of some of these. But if you’re using one of these systems that scores below 6, honestly, think about maybe…well..just…get rid of it.