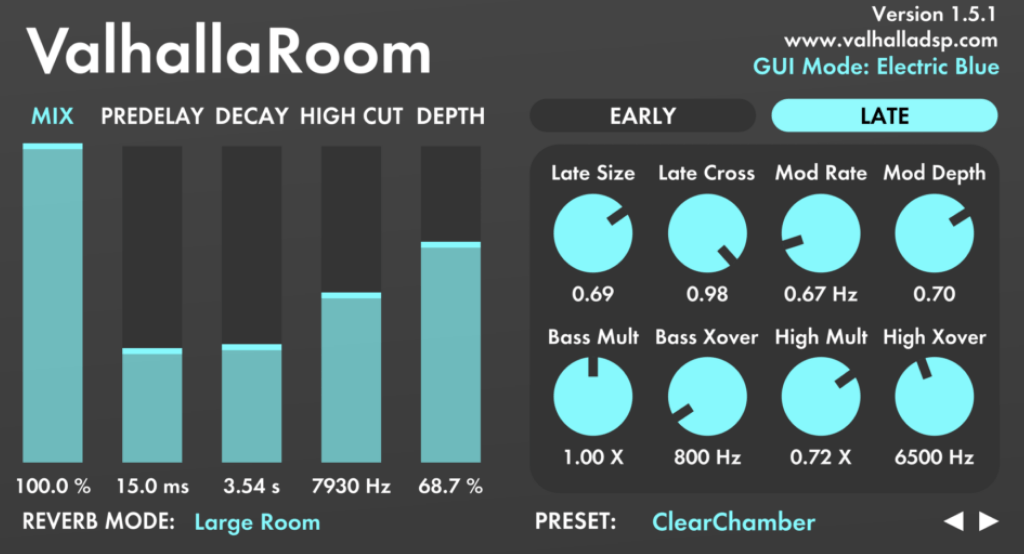 If you’ve spent any time on the Pro Member’s Education Volumes 3 or 4, you know I’m an avid user (no pun intended) of Valhalla DSP plugins. From their free Freq Echo to their Shimmer and Room products. This is the first update to Room I’ve seen since using it and the first major update to Vintage and Shimmer I can remember.

In Room, good man Sean Costello, the genius behind the VDSP products, left everything which is great about

Room alone and focused on the GUI. Now you have several ways to look at it, and it has a smaller, easier to navigate interface. I personally like the “aqua” colored version of it. It was always easy to use, but it’s easier now. Nice.

He also gave us some under the hood fixes like handling the zipper issues with the mix slider and giving us a new super efficient reverb algorithm: Sulaco.

Shimmer 1.04 beta now boasts not only its trademark stereo inputs but now mono in – and – out versions for when you need the Shimmer effect on single channels – which is every day in sound effects land. It also has some OS fixes and enhancements. Shimmer is not as CPU “lean” as it’s brethren are, so efficiency upgrades are welcome for this one.

VV gets a pretty strong update with two new algorithms Chaotic Hall and Chaotic Chamber combine vintage-style digital reverb algorithms with sonic artifacts inspired by tape echoes, to product lush reverbs that easily fit into a mix. The’ve also added a new “dark” GUI option for the NOW mode. If you love the sound of those old plate/hall verbs, VV is something you should have in your arsenal.

The Price is Right

First, Sean is a super cool dude who responds to his e-mail personally. Second, for $50 a plugin you can buy all his plugins for the price of some other manufacturers’ single reverb. Third, if you already own one of these plugins, your update is free.

Look for the review of Valhallah Room to come to Cinema Sound soon.

Do you use Room, Vintage or Shimmer? Let us know or Tweet about it!