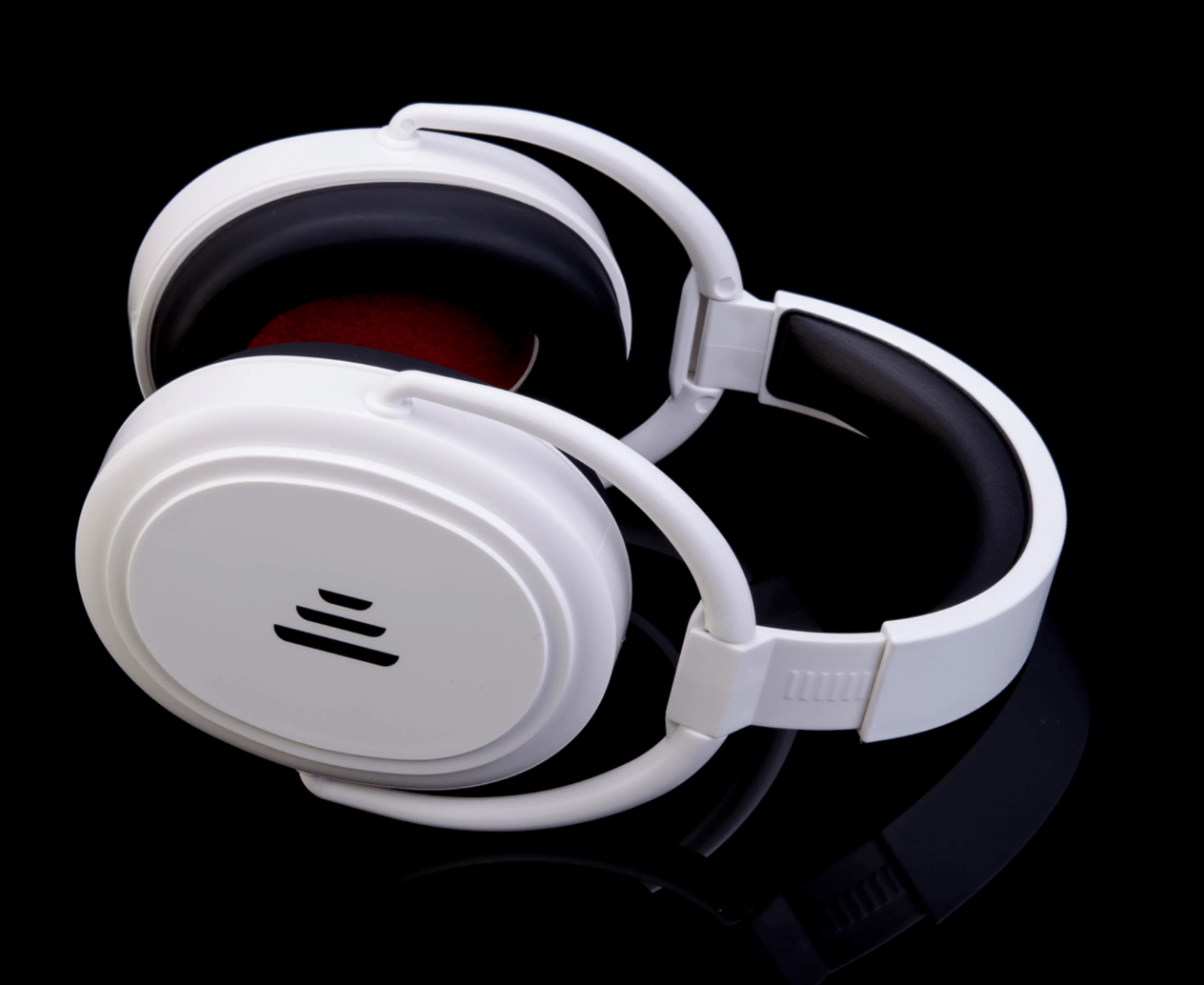 At Cinema Sound, we’re always using headphones for all kinds of things. Whether it’s testing the nature of a mix against speakers in some AKG K371s, to having to do an update to a mix for a client in an airport with the Cinema Sound Extreme Audio EX29s, to just donning some silly consumer buds to hear how “everyone else” will hear it. But when it comes to mixing, we need to be sure our mixes will translate to as many pairs of headphones as possible. We’ve been using the Direct Sound EX29s for years (we sell our own branded version after all), and the latest headphone offering from Direct Sound, the Studio +, is what this review is all about. Can it stand up to the great listening environment of the 371s or the flat response of the EX29s? Let’s see if the Direct Sound Studio + Headphones are up to the challenge.

As we’re always asserting, having flat headphones is at least as important as having flat sounding speakers. What’s “flat” mean? A speaker or headphone which outputs a passive frequency response – or said differently – the speaker/headphone doesn’t color the sound in any way. If you listen to your Bose system, you’ll notice that there’s loads of bass, highs and the mid frequencies are reduced. This is excellent for fun listening, but TERRIBLE for doing mixing? Why? Because if you mixed on a system tuned to have this kind of frequency response, you’d be inadvertently turning down the lows and highs and boosting the mids to compensate. And when anyone listened to your mix on anything other than a Bose system it would sound like audio through a phone. The more flat the frequency response of the speakers, headphones and room, the better the chances of our mixes translating everywhere.

So when it comes to headphones, it’s no different. We want as flat a frequency response as possible. We always need to take into account the nature of bone conduction in our skulls – which means bass response will always arrive at our brains a little sooner than the other frequencies, because sound travels through solids (bone) MUCH, MUCH faster than air. This means that there’s always going to be a bit of “wonkiness” when it comes to bass. The more skull-mass one has, the more wonky the bass response will be – especially in over-ear headphones like the 371s, Studio + and EX 29s.

Never, ever mix on phase cancelling noise attenuating headphones. Especially when working on surround/binaural/3D mixing. The nature of the phase cancellation can cause strong issues in panoramic field perception as well as other frequency issues – especially if you’re in a room with constant noise or tones.

Lastly, unlike speakers, where you can get a killer pair of reference monitors for under $200 (JBL LSR 306s), you get what you pay for, dollar-for-dollar with headphones. Cheap headphones are going to sound cheap. And up to $500, expensive headphones hold their value in sound quality. Above $500, and you’re paying for something other than sound quality.

In the beautifully packaged box, you get the headphones which, like all professional Direct Sound headphones, have the inside of the right channel colored red. “Red for Right.” It makes it ever-easy to figure out which driver goes on which side of my skull. We also get a 1/4″ – 3.5mm adapter attached to a high quality 3.5mm extension cable.

I love the fact the modern headphones are now coming with “break away cable” design. Where the connection from the headphone port on the amplifier to the headphone actually happens a foot or less from the headphones themselves. I don’t know about you, but I’m always accidentally yanking on headphone cables from twisting about or accidentally standing up with headphones on. This puts terrible strain on cables. But with the Direct Sound (and AKG designs), the 3.5mm cable easily disconnects saving permanent damage to connections. And with the included extension cable, it’s easy to not only connect your headphones to remote amplifiers, but also daisy-chain extenders together when multiple Direct Sound headphones are purchased.

For this review, we’ve added in the AKG K371 and EX 29 MKII headphones we’ve reviewed previously in this article for comparison and contrast. It should be noted that just about anything from AKG is going to a good investment. We still have a pair of AKG k240s from 20 years ago. They still work great. AKG’s service is superior, and the company has been around for decades and will be around for decades for anything else you meed need serviced. This, of course, applies to their microphones as well. I mean, is there a studio anywhere that doesn’t have some model of 414?

We’ll be contrasting the following aspects:

Direct Sound touts the Studio + headphones as good for on stage and live performance, and given our experience with them we can see why. As far as frequency response goes, they’re the least flat of the three we’ve tested and lack the high frequency clarity of the other two. However, they do have a calm 1.5k-2k boost which gives the perception of loudness without detracting from overall depth or dimension. For on stage work, this can be an advantage since too much high frequency response can cause ear fatigue, and if one is mixing it’s very easy to fall into the dark hole of ever-adding high frequencies to compensate.

As for comfort, the Studio + are superior to the EX29s, because the foam padding is much larger. Our ears fit far better in the Studio + housing than the EX29. As a result, they scored highest in comfort. And, not surprisingly, since the entire ear structure is covered with foam, they are superior by no small margin in external noise rejection. This surprised us, since the spec on the Direct Sound website says otherwise. It’s clear to anyone who A-Bs the two, however: the Studio+ are far better at isolation.

The lower profile of the Studio + gives it a stronger score for structure and build than the EX29s, but it scores lowest in all the use categories because it’s both the least flat, and the least able to produce clear high frequencies. On set or while tracking vocals/ADR/VO we want to be able to hear strong high frequencies (which is why the K371s score high there due to their very clear highs). For mixing, as stated above, we want flat sound headphones. But in this case, the Studio + delivers neither. And because of their 1.5k bump they’re also not a lot of fun to listen to.

That said, indeed they are rugged, and well designed for on-stage/musician use. Like the other two, the Studio + plus delivers punishing sound pressure levels without any perceivable distortion.

As to why they are $30 more than their bigger brother we’re not sure. In fact, for multi-media use we’d suggest the other two are better value in every way – except for external rejection. There, the Studio + is superior. Thus, if you knew that you were going to be forced to listen – even on set – in a noisy environment, the rejection of the Studio + headphones is the best we’ve heard in any headphone – including phase cancelling. Add to this a vastly improved comfort, and you’ll discover that having a pair of these on hand when in noisy environments will really save you. As a result, the Direct Sound Studio + headphones receive a 115 CS rating.

External Rejection: We noted that the cable connection which is a mini-XLR connection (which we successfully tested to work with our Saramonic Smart Mixer for connecting our 3.5mm Cannon C100) makes no small amount of noise when the user is in motion. Connected directly to the Left headphone, nearly any motion or impact on the cable disturbs listening.

Structure: It was felt that the flexible nature of the EX29s head piece, although it can be easily removed and replaced, also made the headphones feel a bit delicate. Also, Mark has had more than one of his headphones’ ear cushions fall off and need to be super glued back on (although he uses his incessantly every day).

Flat Frequency Response: The AKGs did not fare as well in this category, because – ironically they’re fun to listen to. Lots of super lows (spec takes these things to 5 Hz – and we believe it), a strong bump in the 1.8-3k zone and a general feel of “loudness” has their score be lower here. The EX 29s score quite high here, and is, really, one of their most redeeming qualities: flat frequency response. Generally, the EX29s have a super clean frequency response above 8K. However, the AKGs are vastly superior in handling bass – even if it’s a bit hyped.

Transient Response: Although there’s no really good way to test headphones for this (at least in our studio), we listened for the “leading edge” of highly transient music and punchy dialog. Here, ironically, we all felt like the Apple earbuds did the best – although the overall frequency responses was awful. This is perhaps due to it’s incredibly small diaphragm.

Noise Floor: The Apple Earbuds may have had a false reading for true noise floor, because they have a T/R/R/S connection, and there may be some added noise there from adapters which don’t accommodate that extra ring – whereas on the phone it is.

Max Volume: Even though the specs of these headphones says 114, we assure you, these babies are more than able to give beautifully crystal clear sound at a level which will not only cause you quick damage but also pain. Also note that the EX 29s felt like they were 1-2 dB less than the K371s when both had the same output fed to them.

On-Set: Several listeners felt that if you were stuck and had NO headphones, the Apple Earbuds would suffice for at least checking to be sure things were going down – and because of their hyped high frequencies were good for finding bogies – if they were driven loudly enough.

Cost: The Cinema Sound EX-29 Headphones are this price if you are a Cinema Sound Member. Otherwise, they are $140.

Review: Direct Sound’s EX29 Plus – Dance to the Silence