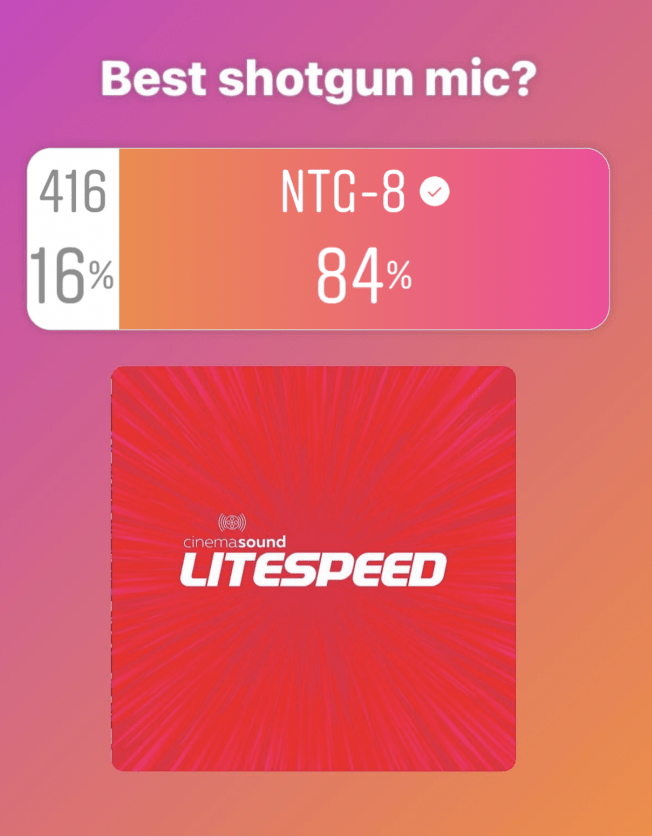 On our ever-growing InstaGram page we’ve been running some not-so-secret showdowns between software and hardware we use and we know you all use. Below is our not-very-scientific but nonetheless interesting results for the Cinema Sound Showdown Results!

We’ll start with Post Production and go backwards to recording and music.

We thought we’d start with an easy one: we all have to use RX – but which denoise tool works best? We were a little surprised to find that a slight margin was given to Spectral Denoise instead of the big powerhouse brought into RX6: Dialog Isolate. For the record: we agree. SD is better. Generally.

Next we thought we’d tackle the big NLE debate:

Resolve handily won the overall vote for best NLE. When we probed further into our 12k InstaGram followers, we found something interesting:

Very Interesting. It appears that even with Resolve’s “updated audio” capabilities, Premiere Pro is still easily on par with Resolve’s Fairlight page for audio production – as far as our members are concerned. We’ll agree there as well – although we’d give Premiere the win.

Then it’s on to Recording Gear:

Saramonic handily took the lead over its Røde competition for best all around on Camera Mic (at least between these two). We’d also agree with this especially in the case of having to deal with wind noise. The Saramonic wind shield – on nearly every one of its microphones – is incredible.

Not too strange. We prefer the MicPre 6 from Sound Devices, and it’s roughly the same price as the Zoom F8N.

Then the most SURPRISING and fascinating results come in the form of on-set and music microphones. We’ll start with music. We had to ask about snare drum microphones. We didn’t ask about bass drum mics, because there are so many styles of music which require different kinds of microphones. You’d never put an RE20 into a rock session’s bass drum, but you wouldn’t put a 421 into a jazz session’s bass drum either. For snares, however, a good mic is still a good mic. And we went for the staple dynamics that are used in every studio around the world.

We were sure the SM58 from Shure would take the cake, but not so. The Sennheiser MD421 with it’s snappy transient response is the clear winner. We’d agree with this too. To be fair, the 421 is 4X the price of the 58.

Then for Ambisonic microphones, we were surprised to find out that the Røde mic is slightly more favored over the Sennheiser in our test. You can see our comparison of them both here.

When it comes to higher-level lavalier/wireless mics, we were shocked at the response. We love the UWP Sony mics and find them superior, but the Sennheiser G4s DOMINATED.

And the biggest shocker of all was the shotgun mic. We were sure the age-old-standard Sennheiser 416 would win out. Not. Even. Close. Our favorite – if not biggest – shotgun mic the Røde NTG-8 won without question.

5 Reasons to All ADR Dialog in Your Project