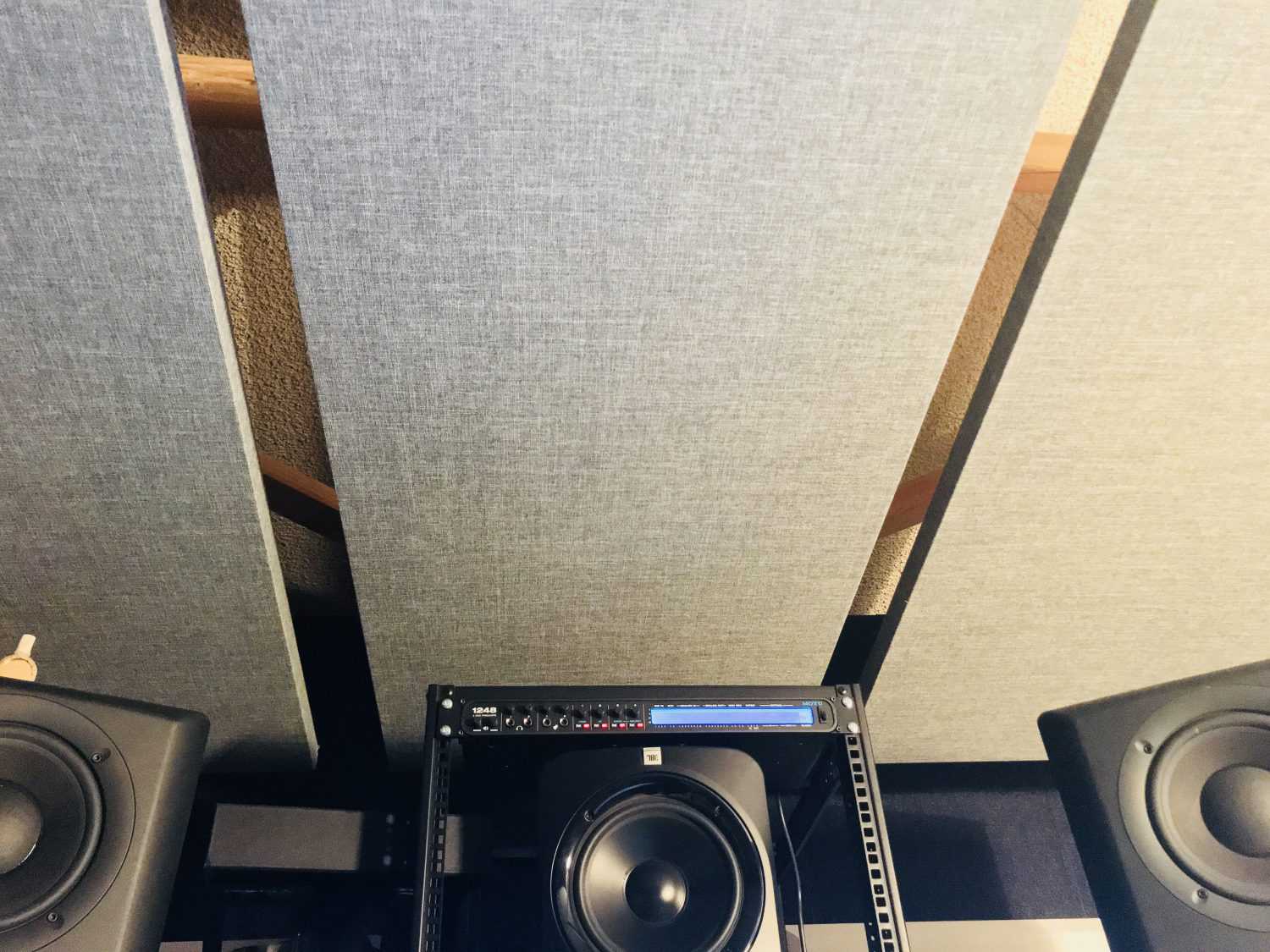 We’ve gotten several requests for how we built the Cinema Sound Studio “B” as a temporary studio. Since I’m no architect, I’m afraid I can’t provide you with the architectural drawings, but hopefully this article will help you understand how we did it. Hopefully you’ll be inspired to build your own.

Our mission was to build a studio that served two purposes: 1. to have a working, small footprint studio whose mixes translated anywhere. 2: to look good enough to be able to shoot educational videos for Cinema Sound in it, and be able to handle a 3 -point lighting scenario. We also wanted the budget for the build to be under $1,000.

As I’ve said in many articles, in any group of men I’m always the least handy, and so there was no way I was going to do this myself. Fortunately, the former CEO of MZed, Jeff Medford, is very handy and also has been a part of the set design for all of the Mzed tours – including Shane Hurlbut’s tours where massive sets had to be built and torn down every night. He fashioned this simple but effective design:

None of the diagrams in this article are to scale, but they should give you a good idea as to what we did. The idea was to have walls which were slightly shorter than an 8’ ceiling so the studio wouldn’t ruin or even interface with the  existing room’s ceiling. It was also decided that the room should have no parallel walls, and a 5º deviation would be required from each facing wall at minimum.

In these frames we placed 1” fibre board. I know. Fibre board doesn’t do a lot for rejecting sound or absorbing it. Because the frame is made out of simple 2X4s, we had to keep weight to a minimum. Also, the wall’s primary purpose was to create a visual “wall” which we could use to easily light and add texture and treatment to after installation was complete. These boards were locked into the frame with 3” wood screws. We used 100 lb strength zip ties attached to 3” screws on the highest, middle and lowest parts of the frames in order to connect the walls temporarily. This also allowed us to experiment with the dimensions of the room until we achieved a solution which worked best.

Once the dimensions of the room were solidified, we added self-adhesive carpet squares to the fibre board on the “studio” side

in order to give a better look than the horrible silver printed boards, and to begin knocking down frequencies from 8K and up. Unfortunately, the “self-adhesive” part of the carpet squares had no interest in attaching to the fibre board panels, so we had to employ the liberal use of a glue gun to insure permanent connection.

At this point, our materials budget was $750, and this reflected the basic design we had in mind.

Once we realized the Primacoustic audio treatment would add another 100 lbs to the walls given our method of installation (which you can read about in this article), we had to reinforce the walls.

I got mentorship from two of my General Contractor friends and created additional bracing along the top of the frames of the walls. The idea being that since the treatment panels would be hanging from eye hooks screwed into the tops of the walls, the frame would want to buckle

inward from the top. Bracing the top of the frames from the middle with a diagonal 2X4 brace would keep that from happening and firm up the structure in general. They also advised that the frame itself be shored with diagonal bracing which I achieved with 1X4 pieces. We also decided to add a single vertical presentation 2X4 to cross the entire studio over the diagonal bracing in order to shore the upper frame from the tension the Nimbus ceiling panels’ cabling would have. Since we were deviating from the recommended specs for Nimbus installation, the horizontal tension to hold those panels at the right position would create added stress on the walls. The vertical brace would keep any frame bending from happening. It also allowed for unexpectedly lucky mounting positions for the Nimbus panels.

The walls themselves are still held together with zip ties, and the bottoms of the walls are slightly unstable, but with the top-mounted bracing, the walls and studio will easily survive any sub-catastrophic earthquake (we’re in Los Angeles after all), and easily holds the weight of the treatment.

The 30” door installation was the most difficult part of the build, and it required clever solutions to be brought. Since door frames are mounted to perpendicular walls, normal installation methods were never going to work, because the walls meeting the door frame were everything but at 90º. At the advice of an employee of Lowe’s, we employed piano hinges to hold the door frame to the walls which allowed us freedom to position the angle of the walls any way we needed them to be. We also had to mount the door about an inch off the floor in order to have the flexibility of the walls themselves not inhibit the swinging of the door.

Now that the studio serves as a great mixing environment and a great shooting environment, the last aspect of the studio will be to have sounds from outside the studio to be reduced. This will require adding additional treatment to the fibre board walls in the form of mineral wool pressed against the panels adding another 7-12 dB of reduction of frequencies down to 400 Hz or so. We’ll also need to work out a treatment for the door itself, since it’s reflective nature – even though it’s porous – causes some strange reflection issues from sound made by the right speaker. The total cost for the hardware: $875.

Hopefully this long novel of an article gives you some inspiration as to how to build your own semi-portable studio. Let us know if you have any other grand ideas about how to build an inexpensive studio in the Cinema Sound forum.

If You Don’t Do This, You’ll Fry Your Gear!

The Powering That Be: Getting the Right Speakers In Your Room