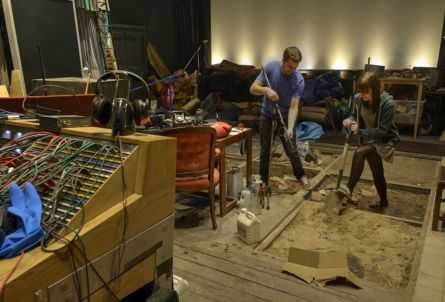 Foley is that mysterious budget item which is often overlooked and kills the project.

It’s the Age-Old-Question: “how much will this cost?” I hear it about audio post about once a week from someone. If you can understand why things cost money in post production, then you can begin to understand how to budget for it. Audio post isn’t the easiest thing to figure out, so let’s dive in to budgeting for this tricky line item.

Honestly, you can stop reading this article here. In general, on budgets which are $50,000 and higher, you can expect to spend 10% of your entire

production budget on sound. This includes music. How much of this budget is music? In my experience, music is 70% of the audio budget – or 7% of the whole. This would including original musical scores which are completely original, completely library, or some hybrid. This DOES NOT include scores which require licensed masters. What do I mean? Well, if you have a $100,000 film, and you want to license 15 seconds of Michael Jackson’s “Thriller” that’s great! Only, you budget will now be $600,000 with a $500,000 world-wide-non-exclusive license for that 15 seconds.

Why is music so high? Consider what I teach in the Pro Member Education: “Music is the giant thumb which MASHES any other emotional intent into what it says it should be.” Have a horror scene of someone getting their thumbs ripped off in a car door? Well, play Mexican polka music underneath and everyone is laughing. So we want to get the music right, and usually that costs no small amount of coin. If you watch the chapter in the Music Volume on structuring the deal with a composer you’ll have a better sense of where to start the negotiations, but there’s very little negotiations available with library music. In fact, I cover how to get your original score price down to perhaps <1% if you structure the deal correctly and aren’t a “white knuckler.” Contrary to popular belief, library music scores licensed for anything more than festival licenses are usually comparable to the cost of hiring a hungry composer or more. You can price excellent library music at Music Bed, and I’ll happily be proven wrong in this if you can show me a music cue lineup which demonstrates it. Don’t forget to cash in on your CinemaSound discount.

I’m also factoring in the cost of musicians, singers, music editing and mixing into this 7%, and unless you’re a master music editor or a musician yourself, you’ll probably want to have this kind of work done in your post audio workflow. Music ain’t cheap – and it should never be free. Just because Napster ruined us in the 90s, doesn’t mean that getting the perfect emotional feel for your film is something you can pull from your aunt’s cousin’s wife’s dog’s brother. And never EVER consider using someone else’s music without a license. Notice “license” not “permission.” Permission means nothing if you start making money with your production. “Permission” is what the attorney representing the music you have permission to use loves to hear is your standing for use in your project. Why? Because they wait until you’ve made some money – maybe three years of net income – and then send a Cease and Desist letter stating that you have no license for the music. They’ll either then negotiate a ridiculous license which you can’t afford and force you to pull it out of the film and lose your distribution deal – OR – they’ll just sue you (and win), because you’re using music without any monetary compensation to the composer or artists. You know that concept “Statute of Limitations?” Doesn’t apply in copyright law at this time, and they can choose to sue you years or decades after your “infringement” – and they’re due treble damages (three times the amount of what they’re due) plus attorneys fees. Also, you cannot have copyright assignment done verbally. It must be a written agreement. No written agreement? You’re using their music without a license, and you can get reamed for it.

Now look, I’m no attorney, and I’m not advising you in ANY WAY. This is just my experience. If you’re unsure of what to do, get in touch with me and I’ll send you to a reputable music supervisor, who will charge you a reasonable fee to insure that everything you need to do is explained to you, and you can decided how to proceed. Music licenses (not library music – which is easy) are very complicated and usually very expensive. Please forgive the rant. If I had a quid for every time a filmmaker said, “oh, but they’ll never find out…”

Depending on how you recorded the audio of your production and if you’re planning on ADR-ing the whole thing, you can expect a week or more

of dialog cleanup for your feature length program. Understand a good DX cleaner will cost $500/day if they’re worth their salt. This is $2,500 – usually packaged to $2k. On a $50,000 production, however, you don’t have that kind of budget and you’ll end up doing it all yourself. At this point, it’s a great $249 investment to learn all there is to learn in the FIX volume here on Cinema Sound. If you’re ADR-ing, and they’re looping, you’ll be able to get through all the DX in a feature length film in about 3-4 days. This includes the cost of the actors coming in (usually their day rate), plus engineer and studio ($500-$5,000/day). Again, on a $50,000 production there’s no budget for ADR, and cleaning up the DX yourself is your best move.

This is where the budget can vary wildly depending on the genre. A drama? This usually is just folded into the foley budget. A sci-fi adventure? Frank Serafine said they worked on Tron for a year. What I typically do with SFX budgeting is figure everything else out and then see what I have left. The other disciplines do not vary much, and it makes judging what kind of creativity I’ll have to use to get this aspect of post done to budgetary spec.

You can certainly do foley yourself. You can accomplish most of it using libraries – especially the foley library we’ll be releasing here on Cinema Sound. There will always be some foley which you’ll have to perform, and it will usually comprise clothing or skin or some other very subtle effect seen at CU on screen. For this, just use your closet, a Røde NTG 4, and have fun. Foley should theoretically cost you little to nothing if you are industrious. If you are settled on having a pro do it, you can expect a single artist to require 6 days or more to get a feature length drama’s worth of foley completed. A good foley artist and studio are $500-$1,500/day. I’m going to say this here: you must not commit false economy on foley. Foley is the glue which holds your audience in the immersion of your story. If it’s fake or “machine gunny,” they’ll be looking at their texts in a darkened theater in no time.

For budgeting purposes, ambiences are typically placed in the sound effects budget. If you’re on a string budget, consider cutting them in yourself. It’ll take a day in a DAW or even an NLE, and they’ll be done. Be sure to consider layering them for your surround channels, because putting the same ambiences up front won’t work the same way in the surround speakers channels.

There are several creative ways to get a super-pro mix. The usual “Hollywood” way is to just spend the money and do the entire mix in a big

“dub stage.” Sure. It’s a party, and it’s awesome, but it’ll kill your budget. Instead, have your mixer – or even an assistant mixer – do a complete mix in their apartment or some other small budget studio. From there, you’ll have been able to input the majority of your notes and major changes will have been done. Once the mix is feeling good, then hire out the big place for your “Print Masters” for three to four days (feature). If you have a good mix going in, figure 6 hours to set everything up in the big studio, then 30 minutes a day, and an extra day for burns or last-minute issues. So, for a 60 minute production you’ll budget 3.5 days – 4 to round up – to get it done. Why do it this way? Well, it’ll take your mixer a minimum of two weeks to get a feature mixed. If 10 of those days are $500 days instead of $3,000 days, isn’t that better? For the low budget productions, you can bypass the “big rooms” by just playing the mix in several speakers, and listening to the stereo downmix on as many systems as possible (your car being one of the best) to insure that it plays “everywhere.”

Here’s some simple examples to give you an idea of what you’ll be spending for a few different budgetary levels of feature productions:

Notice how the percentages in each discipline change as the budgets increase. This is by no means the Bible of how to do this, but over time, I’ve seen this kind of budget work out especially when the filmmaker is willing to get her hands dirty in the DAW chair. Of course SFX and ambiences can be added in the timeline of the NLE, and many industrious and talented editors do this to good effect…thereby seeing a portion of the audio budget being saved. However, no amount of editorial sound can go without treatment or layering, and less of the audio budget is saved than would be otherwise reckoned.

Have a different view about this? Let us know, or Tweet about it!

Think You Have What It Takes To Mix? Take This Test from NPR