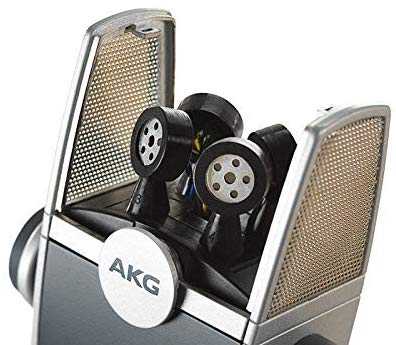 The Lyra has four capsules for multi-polar pattern capability

Podcasting is spreading like wildfire. It’s one of the easiest ways to get creative output to the masses, and because there’s rarely video involved, getting audio recorded is considered an “easy thing to do.” But as most discover the minute they listen back to their careful performances, recording and posting the audio of an interview is perhaps even more difficult to get right than shooting an interview. Thankfully, several venerable microphone manufacturers having come to market with help to the podcast producer. Today, we’re reviewing the just-emerged AKG Lyra podcast microphone. Having just used two of them in the production of our podcast education, we’ve had plenty of experience using them, and Mark puts forth his review of the AKG Lyra below.

The Basics of Podcasting

Most people think podcasting is just a “set up a couple of mics, and record into your phone” kind of situation. However, in some ways, podcasting is more difficult to get right than recording audio on set – and CERTAINLY more difficult than recording dialog or voice overs in studio. Unless you’re recording yourself and talent on one microphone in some kind of figure-8 polar pattern, dealing with two microphones in close proximity in the mix can be devastatingly difficult. Why? Phase cancellation and delays can easily render a well-recorded performance useless. We talk about how to deal with this in the Cinema Sound education in the “Record” volume as well as in the soon-to-be-release Podcast Survival Guide.

What makes podcasting difficult is understanding how to successfully and cleanly record more than one person with multiple microphones – especially when it comes to doing so in a noisy environment. The more people and the more microphones the more difficult.

It’s also important to understand that there’s no such thing as “the perfect podcasting microphone,” since every situation tests a microphone to perform in a different way. For example: if you’re in a noisy situation, dynamic microphones are typically the better choice over condenser microphones. Lavaliers are rarely the choice unless talent must move. Therefore, it’s important when considering to buy one microphone that brings maximum value to your situation that it be flexible. And this flexibility usually finds its way into a multi-polar pattern condenser microphone.

We talk about the value of condenser microphones at length in the Cinema Sound education and at live events, but they are superior in frequency response and sensitivity. And although this may lend itself to a greater noise floor in non-quiet environments, those issues are easily fixed in most DAWs like Adobe Audition.

And in this way, here is where AKG’s new offering in the form of the Lyra comes in full-steam.

What Comes in the Box

Currently, the Lyra comes in two packaged versions. One is simply the microphone and accompanying USB cables, stand, and stand adapters. You can purchase this configuration here, and see our open box video about this here. This you can purchase for under $150.

The second way is in the “Podcaster Essentials” package from AKG which includes the Lyra, a pair of AKG K371 headphones (which we review here), and a handy 3.5mm TRS splitter which allows to people to listen to the microphone output at the same time. This is super helpful when using the microphone in the “figure-8” or “Front and Back” setting. You can purchase the Podcaster Essentials here. This you can purchase for under $250.

How It Really Works

How did the Lyra perform in real-world use? First, let’s consider for a moment that this microphone costs a meager $149. This means AKG – who has a strong history of creating professional microphones which done the walls of the mic vault of every major studio in the world since the 1980s – had to cut some corners to bring this to market. The places where AKG has appeared to do this include the headphone preamp (super noisy and has strong artifacts), polar pattern clarity, general feel of the construction and materials used in the microphone itself, small capsules (although there are four of them). No analog outputs (except for the headphone output). And while in a $1,000+ microphone these issues would be unacceptable, in a $149 one, they are really hardly noticed. When we apply this microphone to the act of recording podcasts in reasonably quiet rooms, we were quite surprised by the clarity and effectiveness the mic created great sounding recordings of up to three people at a time.

Now, I don’t really condone USB microphoning as a rule, because I like to have maximum control over the interface settings, but I was pleasantly surprised at the clean nature of the sound that showed up (no digital artifacting).

Also consider, as with all “usb” microphones, this unit is perhaps more of an audio interface than a microphone. Why? Because a mic could have the best possible transducer components, but if the ADC or other digital components are poor quality, the sound to the computer is still going to be sub-par.

In this case, however, the Lyra does 24-bit and up to 192 kHz sample rate. As I’ve said throughout the existence of Cinema Sound, if an audio interface goes out to 192kHz it’s like to have all the components necessary to get great sound audio to-and-fro the computer, because even the cheapest components required to process 192kHz make processing 48kHz sound amazing. And, true-to-form, the Lyra seems to have little issue getting the sound of the four transducers in the capsule without digital “edge” or “aliasing” to the DAW through the USB-C/USB cable.

As to connectivity, if the Lyra is connected to the computer before the DAW is booted, things seem to work smoothly. But, if the microphone is disconnected while the DAW is running, 3 times out of 4, one side of the input doesn’t work, and the “mute” button must be pressed several times, DAW settings must be toggled and other voodoo to get the mic to return left and right channels on stereo polar patterns.

A multi-polar pattern microphone is essential to the podcaster who must work in varied situations. In this, the Lyra is exceptional. Two patterns for both stereo and mono channel outputs, the Lyra gives the most useful patterns for podcasting (omitting the reasonably useless omni-directional pattern altogether). This said, it should be noted that the polar patterns may seem “loose” because there is a strong vertical pickup pattern on the mic which helps deal with folks putting the mic on tables etc. As such, the mic does a good job of staying sensitive to talent which is a couple of feet above it. A “cardioid” front, “cardioid” front and rear, stereo front (“narrow stereo”) and a dual front and back stereo pattern. It should be noted that the front and back setting (really a figure 8) has limited rejection to the sides. A true figure-8 polar pattern has strong side rejection, however, the Lyra only has moderate rejection. This setting is much more useful for recording two people facing each other in a quiet room than it is for rejecting side noise. The polar patterns are easily selectable from a switch on the back of the microphone – although the blue indicator leds which let the user know which polar pattern is in use has its implementation on the front along with the headphone volume and mute button. The USB output volume being also on the back of the unit.

The included stand is a simple but sturdy support for the mic allowing for easy disassembly for mic stand implementation (which I strongly suggest over having the mic on a table top recording one’s navel). Do note that the cables (3.5mm and usb c) come out of the bottom of the mic, and the stand can pinch and impinge the cables if rotating the mic to and fro.

The sound of the Lyra is really quite lovely. Lots of high frequencies and balanced mids with a subtle bump in low frequencies. However, there is limited proximity effect. We surmise this is from the multi-capsule configuration of the mic. This means that talent can get close to the mic without having overt bass frequencies occur. Please note, however, that the Lyra is a condenser microphone and requires a pop filter if talent is going to be within a foot of the capsules otherwise plosives will ruin performances.

For $149, the Lyra should be in every podcaster’s arsenal. Although the mic has difficulty staying on focus to the talent in noisy environments, a podcaster should consider dynamic or shotgun microphones for such situations. For studio or reasonably quiet environments, the incredible value of the Lyra should not be overlooked. It’s why we give it a CS rating.

Purchase the Lyra by itself at this link,

Or at this link if you’d like the Podcaster Essentials (included K371 headphones and splitter).

Be sure to get your copy of the Cinema Sound Foley Library: MIDI controlled foley from your keyboard using the free version of Kontakt!