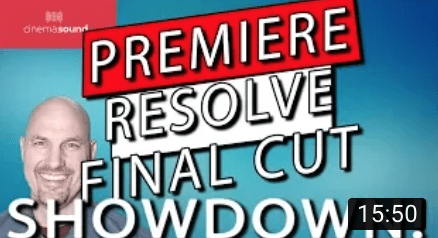 Over the years, NonLinear Editors have risen from the depths of Mickey Mouse software code that takes longer to cut a feature on than using a movieola, to the pinnacle of effectiveness and efficiency. And while everyone has their own preferences, when it comes to general “which one is best” I’m giving you my opinions on all three NLE Showdown (and I use all three).

First, let’s get the obvious out of the way. “Why aren’t you mentioning Avid?” Good question. I hate Avid. Not only the NLE, but I also hate the company. I hate Pro Tools as well. And just because I hate both of these software juggernauts which have become the de-facto standard in both DAW and NLE, it doesn’t mean I have to like them. I use Pro Tools on all kinds of things because it does certain things which no other DAW will do. Fact. Especially when it comes to massive track counts and hardware acceleration. But Avid is just another silly editor trying to keep up with the times and is about 2 years behind everyone else. It doesn’t really even stack up to its competitors. And the only folks you tend to use it are those who are from the “old country” in Hollywood and who are emotionally latched to the software and either don’t want to move forward or are forced to work with antiquated file formats. So, no. No Avid.

As to the others, each of these programs has powerful strengths and eye-rolling liabilities that I wish they’d fix. Both Premiere and Resolve are what I’d consider versions of what Final Cut 8 would have been. For many of us, Final Cut 7 was so good at what it did (back in the day) that we were sure that we’d never need another NLE – until Apple decided to make FCP 8, FCP “X” and completely throw its user base under the bus with a “revolutionary” way of editing: ie, snap-based timelines. Many folks find it faster to work with once the steep learning curve has been crested, and in fact I use FCPX for small projects that have a lot of motion graphics that need to be rendered, because no software renders faster or more efficiently on a Mac than FCPX. Nobody.

So since, Apple left “normal” editors out in the cold with FCPX, Premiere really became FCP 8, and then some. Now with over 60% of the editing market share, what many people used to consider a hobbyists program is now cutting major budget Hollywood motion pictures and has dozens of features that no other NLE (or DAW) has. The late comer to the NLE world is Resolve. And although under it’s pre-Black Magic Designs purchase name (Davinci) it was the de-facto Hollywood standard for color correction, with BMDs acquisition of Fusion, Fairlight and a host of other smart technologies, Resolve is now every bit as much a respectable NLE as its two counterparts.

But which one is better?

That’s sort of like asking “how long is a piece of string?” It depends.

What kind of media are you shooting on? Are you on a PC or Mac? Are you doing heavy motion graphics which need rendering? Are you mixing in the NLE or exporting audio, SFX, editing of audio to another solution? Do you need to be compatible in a single environment for post production? These questions and more really determine what kind of NLE you’re using from our list of three. Still, there are powerful revelations when some of the most important aspects of editing are revealed and put side-by-side. Things become clear. Very clear, in fact.

Here’s a table for what I think should be considered when rating a NLE. Each NLE has an “X” if it meets the criteria and explanations as needed. Let me know your thoughts in the thread!

Here’s a video we did on the subject of the comparison of these NLEs.

For me, Final Cut Pro X doesn’t even rate as a professional NLE. The fact that exporting audio for post production is nearly impossible in any kind of professional format, and that there are NO professional audio mixing tools of any kind or any organization means that audio MUST be exported to another format – and what FCPX vomits out as a track order requires an assistant editor to spend a day per hour of content organizing. No thanks. And while we have presets which help make FCPX work more efficiently for audio, there’s no solving that audio must be finished inside FCPX – and FCPX is horribly limiting. There’s not even a mixer in the program as of 9/20!

As to the other two, I find that I crack open Premiere when I know I need to work in a professional audio environment while in the NLE. If I need more than Premiere offers, I can easily dynamically link the session to Audition where it has more than enough power to handle mixes out to 128 tracks with ease. Also, with the advent of the Essential Sound Panel in Premiere (and Audition), mixing is a very efficient thing to do. I find I use Resolve when I know there needs to be extensive motion graphics, or color correction. The fact that Resolve can also easily create DCPs for theatrical release (not so needed after COVID, but still a nice feature – no pun intended) makes that workflow very easy. And of course, if footage has been shot in any kind of BlackMagic camera, you’re in Resolve no matter what.

Many times I’ll use either Premiere or Resolve to be the assembly or assistant editor job NLE which then gets imported into the other. Since Premiere has unlimited track count audio sync – but must be done one set of clips at a time – and Resolve has up to 8 track automatic sync, but has trouble exporting them, I end up using both programs in larger format projects to create audio telecine and rough assemblies.

10 Reasons You MUST Use an NLE Compressor In Your Timeline

Speed Up Adobe Audition with these Tips!

Audio Is 80% of the Audience Impact