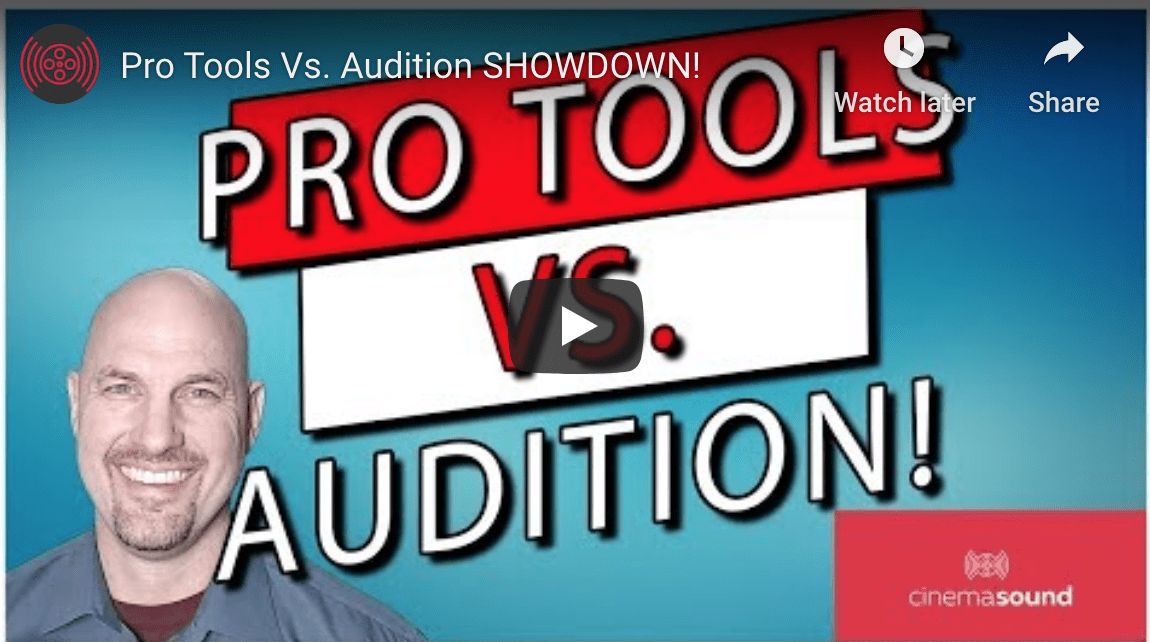 We’ve been talking for years about the virtues of Adobe Audition. How, if you’ve got Photoshop, you’ve got this amazing Digital Audio Workstation already built into your plan – for basically free. How it does things which no other DAW can do. How it so easy to use and the friend of all Premiere Pro Users. But how does Audition vs. Pro Tools REALLY stack up against the competition like? Let’s just see.

Look, if you’re wanting to see if I’m going to say that Audition beats Pro Tools at high track count, low-latency playback, you know I can’t. That’s what Pro Tools does best – maybe the only thing. I’m also not going to say that Audition does music production better than Logic Pro, Nuendo, Cuebase or others, because Audition doesn’t yet have MIDI implementation. But there’s plenty of things which Audition does that ARE pretty amazing. I’m going to create a table below and just do a side-by-side analysis of features to see what YOU think.

For now, if we’re comparing programs like Audacity, Hindenburg and other – what I would classify as – prosumer DAWs, Audition is King. There are a few things that Audacity has which are amazing, like the “Paul Stretch” algorithm which takes just about anything and stretches it to any length. I’ve never seen anything like it. But beyond that, there’s simply no comparison with Audition. Hindenburg has a lovely GUI and is clearly made for the podcaster. It has some lovely workability around editing and processing, but Audition has all of these features along with the power of the Essential Sound Panel. At the Prosumer level of work (32 tracks or less doing program material less than 12 minutes with moderate plugin use), you’re just not going to do better than Audition.

If we compare with pro apps like Logic Pro, Pro Tools and the like, Audition still rates well. Logic Pro still has the nonsensical flaw around surround panning (which Apple may never solve), and it’s primarily a music platform which can be turned into a DAW. Like Audition, Logic is a host-based program, but because it’s apple it does a superior job of using all processing cores of the CPU. This is one of the strong suits of Logic Pro. Of course, there’s no PC implementation for Logic. But the equivalent in the form of Cuebase is just as robust as Logic Pro (if not a little wonkier GUI). Both Logic and Cuebase beat Audition in the ability to maximize CPU resources and play high track count, high plugin count sessions with ease. Also, in general I’d rate Logic Pro and Cuebase’ native plugins as better sounding and more useful for post production (and music). That said, Audition has the best sounding and easiest to use Multiband Compressor, a +-96 dB EQ, a beautiful tube modelled compressor, and spectrographic editing – which none of the above referenced programs have (except for the mottled attempt in Audacity).

As for Pro Tools, well, it’s not the industry standard DAW for nothing. Armed with the most professional software capabilities and up to 700+ track count with hardware acceleration (add $13,000 to the price), you’ve got a powerful contender for the crown. For most people, Pro Tools does everything they want. The trouble is, it’s buggy. I can’t use Pro Tools on my HDX 2 system without it crashing once a day or more – much less trying to get any update to work without having to contact the moronic support. Still, when it works, it’s amazing. It’s native plugins are passable with the reverbs being awful. Also, unless files come from Avid, getting files into Pro Tools is nightmarish (as we all know). But do we really need all that horsepower for our 120 track independent production? I say, usually not. And given that most people are already using the Adobe creative suite (60% of the editing marketplace), Audition, thus being free, is a powerful contender for everyone else who wants professional grade audio production.

Here’s a table for what I think should be considered when rating a DAW, and how I think each of these DAWs rates. Let me know your thoughts in the thread!

Here’s a few videos we did on the subject of the comparison of these DAWs.