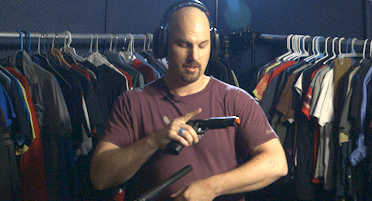 Foley must be done in order to create the fifty million dollar impact you’re project deserves. Tweet: If immersion is the ship that sales your audience where you want them to go, foley is the hull of that ship. And while it’s reasonably simple to record foley in your closet with the right room treatment and a good hypercardioid, there are a few techniques which can really help make your audience feel like they are right next to your actors and make the process of recording much easier.

Loop Record
Like automatic dialogue replacement, recording foley requires a great deal of repetitive takes. It’s rare that you would get your performance right even on take three or four, and being able to retain all of your takes in an organized and synchronize fashion is like gold on a stick. Having a digital audio workstation that can do loop record is a critical element to this process, but it isn’t necessary. It is possible to just run a secondary recorder, Record all of your takes in one Recording and one audio file, import that file into your digital audio workstation, synchronize your takes, and go from there. But that’s about six more steps that are otherwise not required if your sequencer or audio workstation can do loop record.

Wear Your Clothes
When doing clothing foley, many artists hold the clothing in their hands and rub hands together in order to make the appropriate sounds. This can create some very nice performances indeed and certainly allows for quick changes from one kind of clothing to the next. The trouble is it can never be as accurate as if the sound was made against clothing that was wrapped around the appropriate body part. If it’s shirt Foley, for example, then it’s much better to be actually wearing the shirt while making the sound the same goes for pants noises. Tweet: The most authentic performance always comes when the performer is able to wear the trousers themselves. In my case, it actually makes for quicker recording times because getting accurate performance while wearing the appropriate clothing is so much easier than trying to make it sound right while holding clothing in my hands.

Doing foot steps can be one of the most treacherous performances a Foley artist can manage. Especially when the feet are not visible. And, interestingly, even more so when the feet are visible. When feet are on camera, It’s critical to get the heel-toe performances correct, otherwise it jogs the audience out of the story and immersion. When the feet are off– camera there is more leeway and latitude for synchronization, but less latitude for performance. One would think that it would be easier to do such footsteps because the audience can’t see the feet. And while that is true, it spells certain doom for the artists who doesn’t take into account body mechanics and the timing of weight conduction leg to leg. Tweet: The best way to get accurate footstep performances when feet are not on camera is to simply watch shoulders. The human body, when appropriately trained to walk, counter swings arms and upper body to its legs. That means when be right leg moves forward the left arm swings back and vice versa. This causes the shoulders to follow. Being able to follow shoulders and see their vertical movement as well as forward movement reveals the perfect place to insert footstep samples. Naturally heel toe is much less important in this case, and using the subject’s shoulders as a guide, accurate fully footsteps can be obtained with minimal effort. 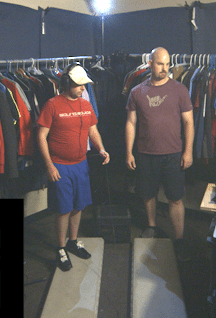 Grow A Beard
I’m always disgusted with the senior sound designers on television series and even some independent feature films who neglects to use the correct skin fully in a romantic scene where a Woman touches a man’s face. Go ahead. Right now, make a noise by sliding your fingers up and down the front of your hand. Notice how smooth and silky that sounds? Up in the 5k- 9k Hz range depending on the size of your hand and the size of your fingers. In many cases this is more than ample to fool audiences into thinking that Amanda is touching the woman’s face. Now, If you are a man, even if you have just shaved moments before reading this, run that same hand down your face. Hear the difference? A completely different sound. Once so different in tone and texture that there is no questioning it’s masculinity. But when sound designers make the mistake of using “any old skin” to emulate a well shaven man on screen, it takes all of the romance out for female viewers. They want to”feel” is masculine face which has a dramatically different sound then the female face. Don’t make this mistake when you do your Foley. Women, how can you do this? Well, either you borrow your boyfriend or husband, or you grow some leg hair. That’s right. I set it. Not very glamorous. But since you’re doing your Foley in a darkened closet anyway…

Foley is a lot of fun to do, and describes the difference between a student film experience and a rapt audience. We have several hours on how to make it work in the MZed Pro Membership Education. Experiment with this and see if you don’t have similar results. Let us know how you get on here, or Tweet about it!

How To: Set Up Audio for Post Houses in Premiere