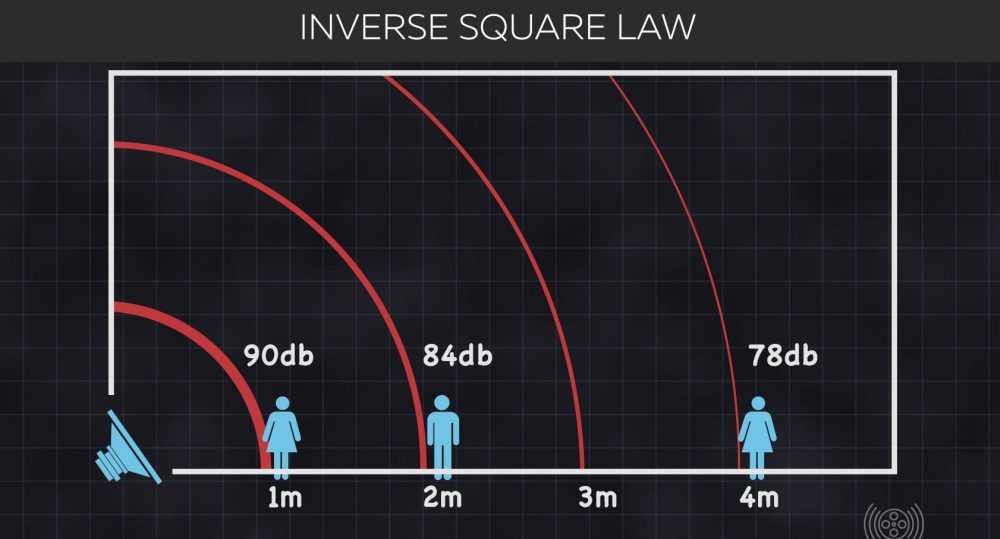 Inverse Square Law is one of those physics concepts we hope doesn’t show up on our final exam in college. It factors into camera work and is critical to understand in sound recording. Let’s take a look at the three things which has your dialog suck from your lack of understanding of Inverse Square Law.

What is Inverse Square Law (ISL)? In audio, it’s a simple mathematical formula which states that sound decreases/increases exponentially as you retreat from or approach a sound source. It’s a lot more complex than that, but for quick understanding of what matters, that’s it. Why do we care? We don’t. Unless you’ve got a lavalier and a shotgun mic recording the same actor.

As you can see from this image, if you have a sound source which is 90 dB at 1 meter, when you’re two meters

away it’s now 84 dB. That may not seem like much, but remember that to a dB meter, 3 dB is either double or half that actual energy of sound. To your brain, 6 dB is. This means that to your perception, a 1 meter retreat will feel like half of the sound has been lost. Crazy. I know. It continues as you retreat another meter with another attrition of 6 dB. And on it goes. It’s all either exponential or logarithmic depending on your religion.

Why does any of this matter?

Your Dialog Sucks Because:

One. Some sound recordists I know just set their levels and let a take happen without feeling like they need to

move any knobs…worse they’ll even rely on their built in monkey-vomit recorder compressors and limiters to insure things don’t go over. Insert buzzer sound here. In such a case, if an actor steps even 1 meter away from the shotgun mic, they’ve lost double their energy and half of the energy from the listener.

Yes. That’s true. But in post, how do we rectify the loss in volume? Right. We bring the fader up/volume up 6 dB. But what else are we bringing up? Right. The noise floor, background noise and worse. Boo. This is no way to make great sounding dialog happen. Plus, in post we add further compression and EQ to have the dialog balance with the rest of the mix – which exacerbates the issue.

Two. Take the example the other way. The actor walks towards the mic 1 meter. Remember the recordist with his hands off the knobs? Where does he set his levels? -12 dB usually. (I say do -10). Sure. Great. Now that the actor is 1 meter closer, they’re hitting -6 average…but what happens if on that take they got a little stronger? Yeah. You’re fried and went over zero. Gotta redo the take. Hope the performance was redoable. To say nothing of what happens if the actor steps 2 meters in. They’re going over even at regular volume.

“Mark, I can just set the volumes lower if there’s motion in the scene, and then it’s handled!”

True, but again, what you have to do in order to deal with that in post is to bring everything up…and in this case, you’re bringing up pre amp and machine noise – which in the case of a recorder like the Zoom H6, can be significant…and force you to take undue measures for clean up in post.

Three. Same example, but now add that the actor is wearing a lavalier. Let’s say she hits her marks perfectly, and the boom op nailed his positions too. Nice. But the issue is that the bozo sound recordist decided that in order to keep things “easy for you in post” he summed all channels – the lav and the shotgun – into mono. To help. Sheesh. So now, you’ve got two problems: 1. the distance between the two mics is constantly shifting, since the lav is relatively fixed in relation to the mouth of the actor, and the boom is always going closer and farther between the operator and actor. Summing those two mics creates a weird phase issue which you’ve heard if you’ve ever tried to put a lav and a boom together in a mix. 2. Because your brain is always lying to you, one of the things it does is make you think the first thing it hears is the loudest thing. Worse, it’ll “mute” anything which is actually softer and later if its relatively the same program material. And here we go: A lav which receives the sound of the actor’s voice FIRST, and is at a fixed distance to the mouth, and a shotgun which receives the sound LATER, and whose volume is going up and down thanks to distance changes and ISL. Are we ever going to hear the shotgun? Nope. Not too often. And now you’ve wasted the energy and money of having a boom op there at all. Probably should have just fired the recordist.

What does all of this mean? Well, first, as I always say throughout the MZed Pro Member Education, record with as many mics as possible, and unless you have the Waves Audio Dorough system, use only one-at-a-time. That solves the phase issue. Second, ALWAYS HAVE YOUR FINGERS ON THE MIC PREAMP KNOBS!!! You never know if the boom operator is going to guess the position of the actors correctly, or if an actor will hit their marks right. Most of the time they don’t, and you’ll need to react fast to insure good levels. You catch a sound recordist without their hands on the knobs, FIRE THEM IMMEDIATELY. Third, ALWAYS, ALWAYS record discreet tracks of audio. NEVER, EVER sum them to mono.

Did I mention, never?

Debunking the Analog to Digital Process