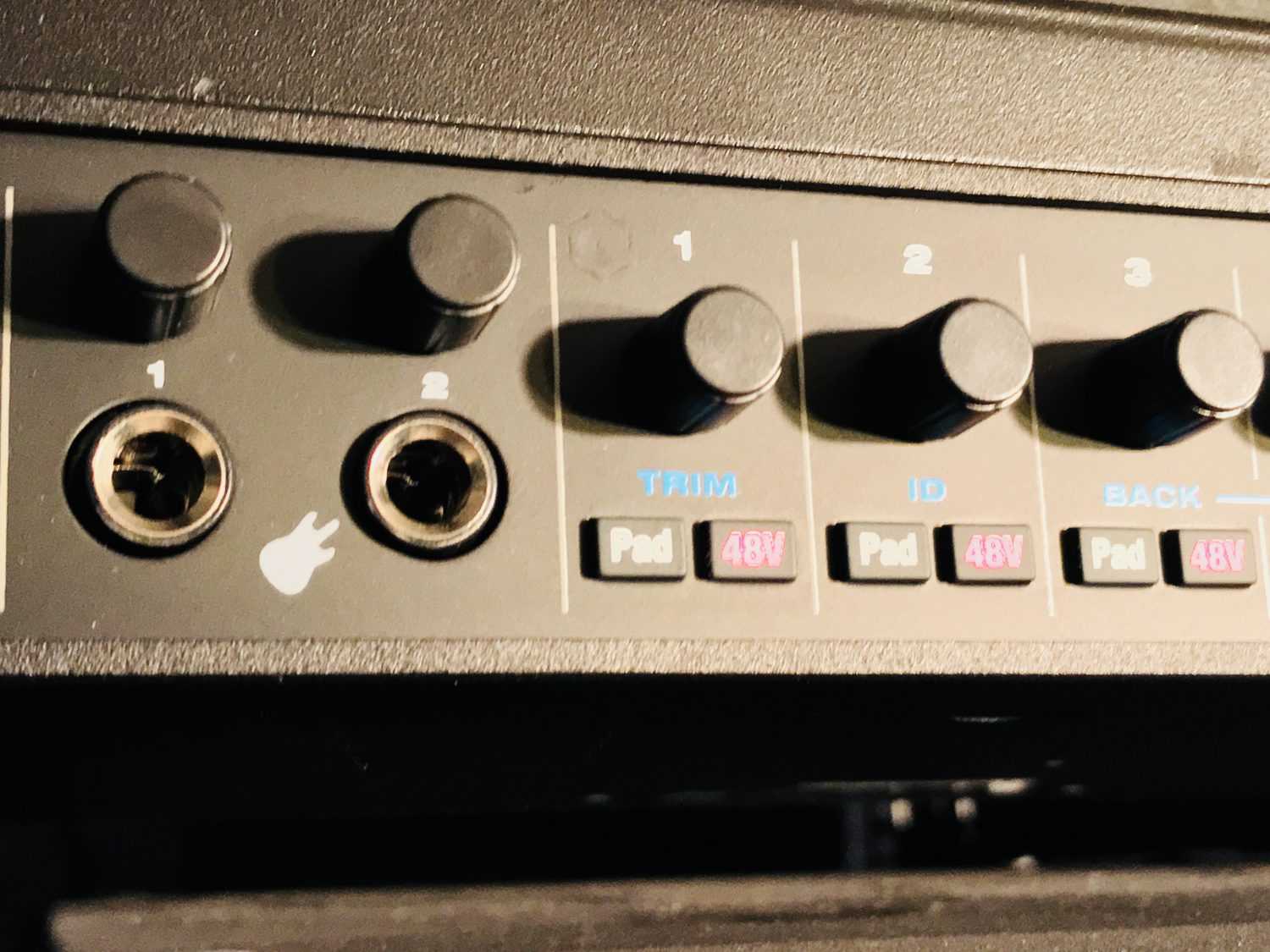 Unknown Fact: those inputs on the 1248 can receive Timecode

I’ve said before there’s multiple ways to get great sound on set. And while the easiest way to do it is with a dedicated recorder box with built in mic preamps and SD card recording capabilities, it’s by no means the most powerful way to do it. In this article I’m going to show you how you can use the MOTU 1248 interface (and many others from MOTU), combined with your laptop, to be a powerful audio recorder. Yep. The 1248 as a Recorder. Check it out.

On set, you need a recorder which has a STABLE clock, passable (ideally stellar) preamps, XLR and 1/4″ inputs, multiple

headphone outputs and an easy way to record takes, slate them, and connect them to timecode. The most efficient boxes I know which do that are from the good folks at Sound Devices and Zoom. The bigger boys, of course, have boxes which do this in spades, but you’ll sink $2,500 or more on them. Moreover, you want to be able to record at 192 kHz/24 bit if you had to (just in case you got the odd concert to record or needed to do some serious pitch shifting on sound effects), and you want it to be portable.

Mark of the Unicorn

MOTU has been making affordable and hi-value audio/MIDI interfaces for decades. In fact, my first audio interface was the venerable 2408 MK I with 24 tracks of ADAT I/O, 8X8 RCA I/O, it was ideal for running audio out of my digital mixer. Although I was only doing music back then, it was still totally dope, and I sold it (along with my mixer) with sad feelings.

Nowadays, MOTU is on the bleeding edge of audio interfaces for composers, musicians and sound producers, but rarely are they considered a purchase for independent media creatives. That’s all changing thanks to Cinema Sound Members discovering some of their wildly affordable interfaces for surround like the Ultralite MK 3 & 4 (which we also use in Cinema Sound Studios). MOTU is the only company which offers as many audio interface features and MIDI anywhere. Although Roland has a single box which can do what some of the MOTU boxes can, the fact that MOTU boxes can be operated from a wifi connection on any browser (including your phone or tablet) makes MOTU the clear front-runner in the world of new and valuable kit to own.

What’s WRONG with my Recorder?

Sure. Why would we want to throw out our $1,000 F8? It has timecode, reasonable Pre amps and has timecode I/O as well as a

reasonably set up way to tally and label takes.

Well, consider the downsides of an F8 or other recorder system: you’re totally stuck with dealing with a knob for take names. And while the F8 in particular has a cool way to pre-create take names in a macro, if you have wildly changing scenes and takes (especially if you’re shooting a commercial or TV), the production may end up waiting on you. Drag.

And while the F8 has a robust BlueTooth connectivity tool for remote use, you’re stuck with Bluetooth. That’ll get you, what, about 15 feet from the box? But what if you have to move 50′ away on a quick location change? Nope.

The F8 and many of its ilk have reasonable clock and pre amps, and of course, the ability to slave several boxes together via SMPTE, but none of these items should be considered “pro.” “Functional” is a better description, and although they can be clocked at 192 kHz (where they sound pretty great) no one runs takes on set at this sample rate…which relegates these mission-critical components to their lowest fidelity capabilities…and given that the clock in the F8 isn’t the most stable, you’ve got a recipe for mediocre sound. Functional sound…but not the kind of sound which can be considered the end all of fidelity.

Lastly, dealing with file organization in Post Production is a bit of a hassle as well, since the limited file naming structure available while rushing on set – using a knob to label takes – finds its way into error and difficulty without well-taken audio/camera notes, having an easy qwerty keyboard way to enter take names is sometimes the difference between several hundred dollars worth of assistant editor fees.

Don’t get me wrong, using a recorder is the standard way of doing things. They’re easy to carry, compact, all-in-one, and generally get the job done – with a little hassle. But what if you could have your cake and eat it too?

I’m going to use the 1248 MOTU flagship audio interface as the example here, but this might as well be the same for the

Imagine this: you were on set, and had your laptop be the place where takes are recorded in a familiar interface, locked to timecode, near unlimited filename size and the ability to deal with filenames while takes were being recorded. Also imagine if this system allowed you to easily export all files to any file type, double as a surround sound system interface, mixer, effects and have wifi (not Bluetooth) access to it from any browser on any device you might have in your hand. How would that feel?

You may not know that MOTU makes one of the worlds most respected music creation programs in the form of “Digital Performer.” Fully 50% of the “A” list composers in Hollywood use it. Although most of you use Adobe Audition, because of it’s lack of MIDI capabilities, DP factors heavily as a DAW for music if not also for audio post and it integrates to MOTU devices the way Avid Pro Tools hardware does: at near-zero latency times.

If you were to use Adobe Audition on your laptop along with a 1248 connected via thunderbolt, firewire, or USB, here’s what you’d get that the dedicated audio recorder can’t do:

What are the down sides? Well, at least with the 1248 you’d only have 4 XLR inputs. But how many boom poles are you going to run on set anyway? The lavs can all be run into the 1/4″ inputs of which there are a ton. Of course, portability is a little more difficult, since you’ll have to lug your laptop and the 1248 itself along with connection cables – and of course you’ll need power, since the 1248 doesn’t run on batteries. And while that right there may be the deal breaker, if you’re in a situation where you know you’re going to be interior, it’s not something you’ll have to deal with.

Lastly is the price. $1,499 which doesn’t cover the laptop. Yeah. I know. You can get an F8 for $999. But you’re into a Roland R-88 for way more than that, and with all recorders you get what you pay for. And in the case of a $1k recorder or less, you’re sacrificing sound quality for price. Sorry. I’m just saying.

How the Heck Does the 1248 Read Timecode? There’s No Timecode Input!

It’s a great question. But one that has been solved as far back as my first MOTU interface. Get this: on every audio input, you

can tell the 1248 – or any MOTU interface – to “listen” for timecode. Once it finds it, it locks itself to the code, and sends MIDI Time Code to the DAW…and like magic…the DAW starts chasing. Pop the DAW into record, and you’re making takes happen. So simple. Just send it an audio SMPTE signal, and you’re good to go.

Is this a different workflow? Yes. Like completely. But I’ve seen this done, and I find it superior. And while you’re right that many recorders double as audio interfaces, none of them have MIDI built in or the ability to drive your DAW from timecode input.

Go check out Mark of the Unicorn and see if they have an interface which does this for your situation. Let us know on the forum if you’ve tried this kind of workflow and how it worked for you.